Apple has just launched the HomePod, which means it’s finally joined the AI battle for your home. It’s a bit late to the party, though – the Amazon Echo has had a couple of years’ head start and is now properly established.

Then again, this is Apple, and they don’t play by anyone’s rules. Which is better? It’s time for a good old fight: it’s the Apple HomePod vs Amazon Echo.

Update: In September 2017, Amazon announced a whole raft of new Echo products, which we’re now waiting to review. You can read about some of the new devices below:

The Apple HomePod looks like a softer, smaller Mac Pro. That’s the first thing to enter my mind. It doesn’t scream for attention like some of Apple’s other designs, but that makes sense because this thing is supposed to blend into your surroundings. Apple says the material on the outside is a sort of acoustic mesh.

By contrast the Amazon Echo looks a little more striking. Its sharp cylinder shape cuts a more imposing figure, and it’s taller too – it’s over 9 inches tall while the Apple HomePod is less than 7 inches.

At this stage, Apple hasn’t revealed many other physical aspects of the HomePod, so we don’t know about its connections. We know it touch controls, but that’s about it. Hopefully it will at least match the utility offered by the Amazon Echo, which has a volume dial, a mute button and a ‘wake up’ button for when you don’t want to shout the trigger word.

A 3.5mm input and Bluetooth connection would be great too – the Amazon Echo doesn’t have that, but the smaller Amazon Echo Dot does.

What we do know is that the Apple HomePod is packing some proper audio equipment, because it wants to be a viable music source. It has a 4-inch woofer and seven tweeters. Amazon’s woofer measures 2.5 inches. We can expect the Apple HomePod to shift a lot more air. 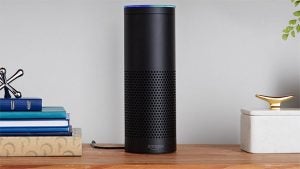 The HomePod has an A8 processor inside, which is the same chip you’ll find inside one of the latest iPhones. What can that do? For starters, it’s smart enough to process spatial data and make acoustic adjustments for the best sound in any location. The Amazon Echo doesn’t have an equivalent function and puts out the same sound no matter where it is placed.

Apple HomePod is hooked up to Apple Music. That means it has your playlists as soon as you log in, and most importantly, it knows your music tastes. Amazon Echo doesn’t have that. It offers Amazon Music and Spotify, but neither of those can boast the ‘custom’ music service that is Apple Music’s unique selling point.

Spatial awareness and music tailoring aside, that leaves the smart AI assistants. This is a much more even playing field, with Apple’s Siri versus Amazon’s Alexa. Both can complete basic tasks like setting timers or performing simple web searches for inane trivia. What else?

Siri is integrated with Apple HomeKit, and can control elements of your smart home that way. You can tell Siri / HomePod to turn off your lights or put the heating up. Amazon doesn’t have a hub system like HomeKit, but it does have a huge selection of third party ‘Skills’, and it has had a head start in home integration. You can use your voice to turn off Philips Hue lights as easily as commanding your Neato Botvac Connected robot to vacuum up in the kitchen.

Amazon Echo does have a big problem on the horizon, and it’s Apple’s big push to make Siri more intelligent and contextually aware. Siri will be able to take follow-up questions, like Google Assistant. It will also be able to translate. Currently, Alexa isn’t smart enough to do that.

This was always going to be a tough category for Apple to win, since it generally makes expensive things. And the big number is… $349.

That’s a lot, but Apple hopes you’ll consider the HomePod as a proper audio device rather than just a smart speaker.

Amazon, meanwhile, is clearly the value proposition. The Amazon Echo costs £179 / £149, and the Amazon Echo Dot does plenty of the same things and costs just $49/£49. 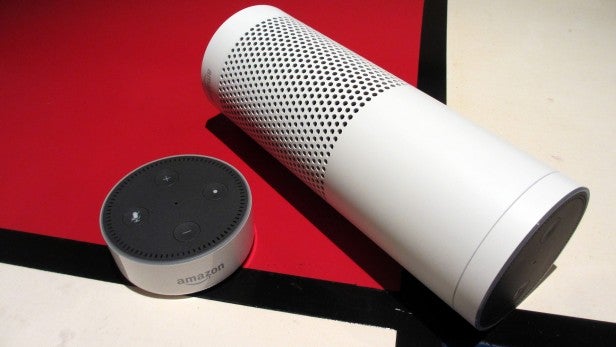 Apple has taken the premium route with an emphasis on higher-quality audio. Was that a calculated decision, or was that the only path left in an increasingly crowded smart home market?

Either way, the HomePod appears to be an upgraded Amazon Echo in many ways. It has more sonic muscle, and it’s smarter, which will go a long way to undoing Amazon’s headstart in this department.

The big issue is price – do you care enough about a slightly better sound and AI to pay almost double? We’ll have to wait and see when we’ve had a HomePod for review.

Which do you think will win the smart-speaker war? Let us know in the comments below.