We’ve waited longer for AirTags vs Tile than we have for Tyson Fury vs Anthony Joshua. Now Apple has finally laced up the gloves, what can we expect from the heavyweight item tracker title fight?

Apple has finally (it’s been so long this probably deserves a The Rock-like “fiiiiiiiiiiiinally”) announced AirTags at its Spring Loaded event on April 20. The tracking devices, which can be attached to your keys, wallet and most other things, can be used to locate those items via the Find My app.

We’ve been hearing about this since the iOS 13.5 beta over a year ago. But now, with AirTags set to be released on April 30, we can compare them to the long-standing market leader, as well as Samsung SmartTags. Let’s check out the tale of the tape…

Right now, the Apple AirTags have a leg-up on the incumbent player. As well as Bluetooth tracking, the AirTag has the U1 Ultra Wideband (UWB) chip that’s also inside the iPhone 11 and iPhone 12. For those without an iPhone 11 or iPhone 12, existing Bluetooth tech will be relied upon.

UWB technology is much more accurate than Bluetooth and will enable AirTag owners to zero in on the precise location of the device, using the Find My app. Bluetooth will get you within 5m, while UWB can get you within 5cm. When using UWB, the app will show users the precise direction and distance to the item, as you can see below.

Related: What is Ultra Wideband?

“Precision Finding fuses input from the camera, ARKit, accelerometer, and gyroscope, and then will guide them to AirTag using a combination of sound, haptics, and visual feedback,” Apple says.

Rumour has it that Tile is working on its own UWB tracker, but for now it’s Bluetooth-only. It’s less precise, but will guide users in the right direction via warmer/colder-style rings within the app. 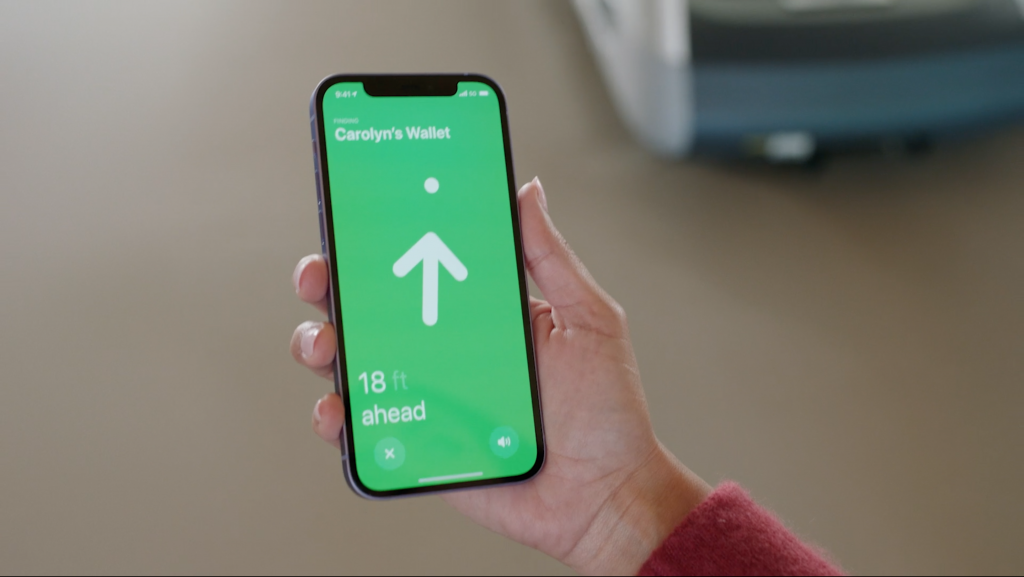 Apple AirTags vs Tile Trackers – Range and other tech

Thus far, Apple hasn’t revealed the max range range for the AirTags. As for Tile, you’ll be able to pick up your device from the following distances:

Apple says the AirTags supports Siri, just like Tile. That allows owners of both devices to consult the voice assistant to help with location tracking. Both devices, will naturally play a sound when discovered.

Apple has also stuck an NFC chip into the AirTag, which comes into play when the item is in Lost mode. If the AirTag is discovered by a member of the public, “they can tap it using their iPhone or any NFC-capable device and be taken to a website that will display a contact phone number for the owner, if they have provided one,” Apple says. 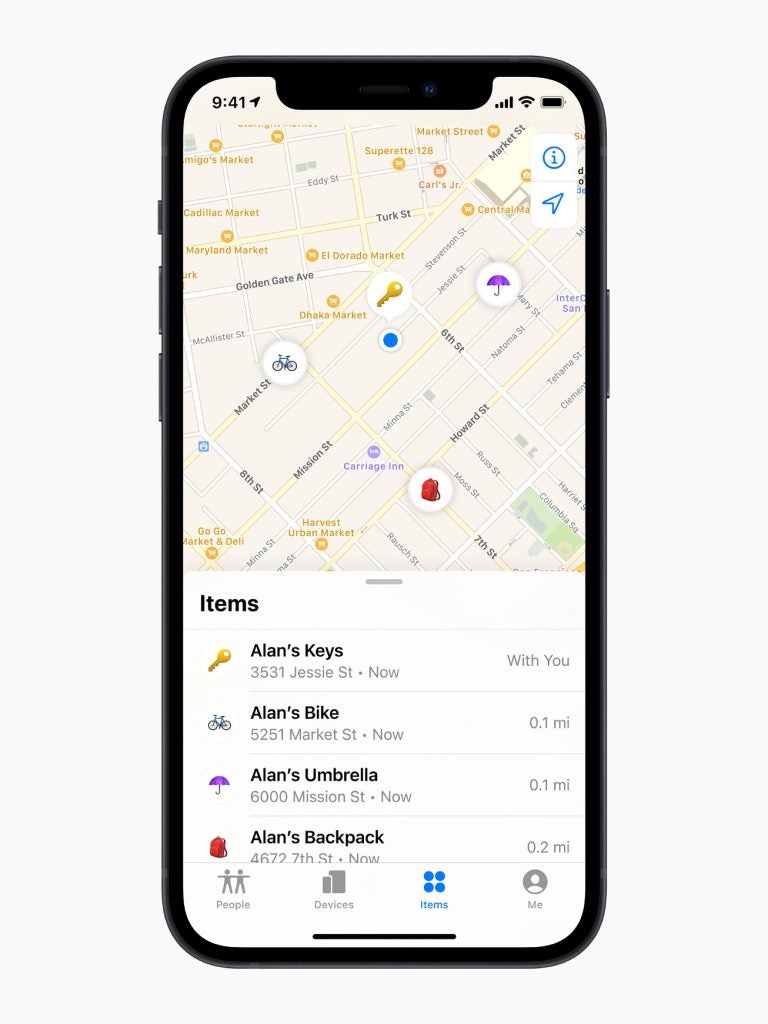 What’s missing from AirTags is a button that users can press if they want to actually find the paired iPhone. That’s a feature all Tile devices have. This might be the key reason folks stick with, or buy, Tile devices because it’s handy when the phone is hiding somewhere under a sofa cushion.

Apple AirTag users will also benefit from a much wider tracking network, thanks to the hundreds of millions of Apple devices out in the wild. If the device goes out of the UWB or Bluetooth range, the user will be able to leverage other Apple devices within range.

“Users can also place AirTags into Lost mode and be notified when it’s in range or has been located by the vast Find My network,” Apple explains. “If a lost AirTag is found by someone, they can tap it using their iPhone or any NFC-capable device and be taken to a website that will display a contact phone number for the owner, if they have provided one.”

Right now Apple is only offering one AirTag design. It’s a polished stainless steel coin that will slide into a wallet or purse easily. Of course, there’s a new range of accessories, including a leather one from Hermès (this is Apple we’re talking about here) that will turn it into a keyring, enabling it to be attached to a backpack, or a set of keys. Users can also get custom engravements, if they so choose. 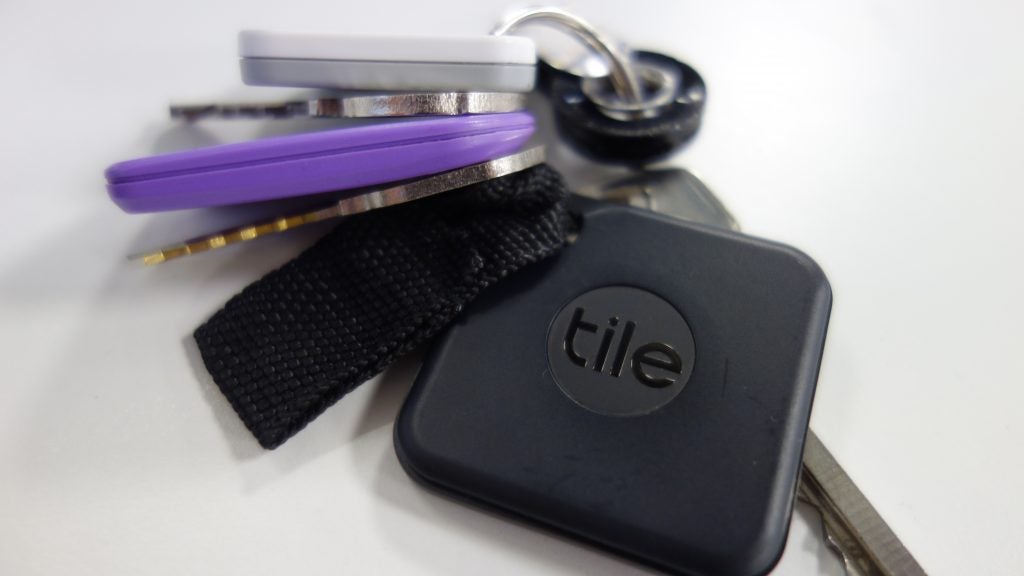 AirTags promise IP67 water-resistance, meaning they’ll survive a dunk in 1m of water for half an hour, which matches much of the Tile range.

Once you buy the AirTags, you’ll benefit from all features; unlike Tile, which sells Tile Premium subscriptions for £29.99 a year or £2.99 a month. The subscription also offers smart alerts for when you leave devices behind. Users also get an enhanced location history feature, free battery replacements and extended warranties with the subscription.

Apple’s products are priced around the same as the top Tile Pro, but there are multiple options in that range that Apple doesn’t offer yet. The AirTag is priced at $29 for one, or $99 for a set of four. Apple has yet to announce UK or EU prices, but since this is an Apple product, we’d expect it to cost £29 for one, or £99 for a four-pack.