The wait for Apple’s AirTag is finally over. The long-awaited tracking device was officially unveiled at Apple’s Spring Loaded event and it’s now available to buy. Here’s everything you need to know about Apple’s answer to the Tile tracker and Samsung SmartTags.

Apple’s attachable GPS tracker has been the subject of leaks and rumours since 2019, and we’re excited to finally learn more about it tonight. Like Tile trackers, the AirTag is a compact tracker that can be attached to your keys, wallet, luggage or anything else you might be prone to misplacing, but which doesn’t already support Apple’s Find My technology.

Here’s everything Apple has announced about its AirTag including design, features, when you can get it and how much it costs. 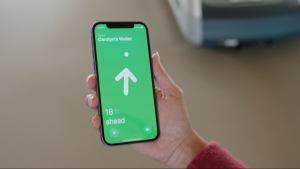 AirTag release date and price – When can you get it?

The AirTag was announced at Apple’s Spring Loaded event on April 20. The device will be available from April 30 and you can order now through Apple’s online store.

A single AirTag is priced at $29/£29, or $99/£99 for a set of four. There are also accessories available, with Apple’s starting at around £35/$35 although expect cheaper third-party options to become available. You’ll need an accessory if you want to attach an AirTag to your keys, for instance.

The AirTag is a small, round tracker made from polished stainless steel. The unit can be personalised with laser-etched letters and emojis, and features a built-in speaker to alert you when it’s nearby.

The AirTag is also dust- and water-resistant to IP67, so it can be used alone or with an array of accessories including bag charms, luggage tags and keyrings. These make it possible to attach the tracker to your backpack, luggage or anything else you’re worried about losing. It does seem strange that for one of its pain functions it requires a case, and hopefully, this is something Apple addresses with the second-gen model we’re likely to see at some point.

The AirTag runs off a battery and it’s you can replace it once it runs out after, Apple said, a year of use. To remove the battery you just twist the bottom and it pops off.

Apple has collaborated with Hermès on a handcrafted leather edition. This includes a bag charm, luggage tag and keyring, each with their own AirTag etched with the Hermès signature. 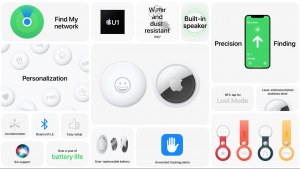 AirTag features – How does it work?

The AirTag works in conjunction with Apple’s Find My network to help you keep track of your belongings.

You can view your AirTag on a map, play a sound to help find it, and use a feature Apple calls Precision Finding to view directions to your AirTag when it’s nearby. The latter method uses the iPhone’s U1 chip to create an overlay to point you in the direction of your AirTag and denote exactly how many feet away the tracker lies.

“As you move, Precision Finding uses our U1 chip to get the precise distance to your AirTag”, said Engineering Program Manager of iPhone Systems, Carolyn Wolfman-Estrada, at the announcement.

“iPhone fuses that data with input from the camera, accelerometer and gyroscope to give you visual, haptic and audible feedback, guiding you right to your AirTag”.

In addition, Apple claims that privacy has been built into the AirTag, as well as its Find My network. Safety features such as unwanted tag detections, rotating identifiers and audible alerts from unknown tags are used to discourage unwanted tracking. Plus, anyone can participate in the Find My network without worrying about their location being exposed to others.

Hannah Davies, Staff Writer – “The AirTag is a product that’s been a long-time coming. Find My integration is sure to make the Apple tracker incredibly convenient for those of us caught up in the Apple ecosystem, and the device fits in nicely with the rest of Apple’s product line.

However, it isn’t cheap. A single AirTag costs the same as Tile’s most premium Pro tracker and a four-pack to cover my luggage might actually be worth more than the inside of my suitcase. If I’m looking for basic tracking, I’ll probably stick with Tile’s cheaper lines for now.”