The wait is over, Apple’s completely wireless AirPods headphones finally went on sale this week after lengthy delays, huzzah.

They’re still only available in limited numbers though, and that’s prompted some to try their luck and attempt to shift them on eBay for more than three times their retail asking price.

Despite the headphones costing £159 brand new, they’ve been spotted going on the resale website for as much as £500.

This isn’t just a sole chancer trying their luck either. There are dozens of second-hand sellers already trying to shift their in-demand earphones. 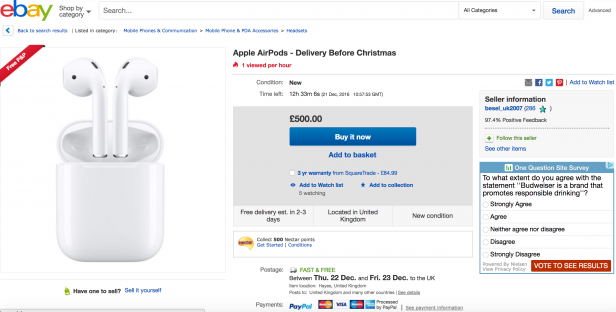 Bids have repeatedly gone over the £250 mark, with those desperate to get their mitts on the already iconic device seemingly willing to pay any price to have them before the masses.

Having originally been pencilled in for an October rollout, Apple delayed the AirPods until mid-December without fully explaining the cause of the postponement.

Despite lacking any cabling, the AirPods are smarter than you might think with Apple’s new W1 chip meaning they can connect instantly to any of the company’s iPhone, iPad and Mac devices.

That’s not where the smarts end either. Once you’re listening to music, removing one of the AirPods from your ear will automatically pause your music. Return it to your ear and your music will instantly start playing again.

When not in your ears, the AirPods, which boast 5 hours of audio playback on a single charge, are housed in their own charging pod.

You’re not going to wan to lose a headphone though, a single AirPod replacement will cost you £65.

WATCH: Trusted Explains: What type of headphones should you buy?

Would you pay more than £159 to get the AirPods before Christmas? Let us know in the comments below.