The movie borrows heavily from the ideas of Black Mirror and Minority Report to build a world in which people have willingly installed chips in their brains to both record everything they see and to deliver an augmented reality existence so advanced it makes the Hololens look like a Fisher Price toy in comparison.

On a good day the technology will show you your colleague’s name before you forget it for the fifteenth time, or will help the police gather evidence to solve a crime, but pretty soon things start going sideways, with a hacker (played by Seyfried) manipulating recorded memories and augmented realities to go on a crime spree.

We sat down with director Andrew Niccol (who wrote The Truman Show back in 1998 and directed Gattaca the year previously) to find out everything you need to know about the upcoming movie, which is being released on May 11 in UK cinemas and on Sky Cinema.

It’s not set in the future, it’s set in a parallel present

The idea of technology being able to directly record from our eyes might seem pretty futuristic, but it’s conceptually not that far away from what many of us already do with our phones and wearables.

Instagram and its cohorts encourage us to photograph and live-blog our lives with such regularity that we might as well be recording, and devices like Snapchat Spectacles encourage us to record directly from just in front of our eyes.

“We’re all life-logging right now,” Niccol says, explaining why he doesn’t think of Anon as being a futuristic movie at all.

“I think we’re in it now, that’s why I don’t say it’s a futuristic film, it’s a more a parallel present,” he says, “I deliberately didn’t make it overtly futuristic in appearance because I don’t want you to emotionally check out and say, ‘this has nothing to do with me.’”

Although this has terrifying implications for us as viewers, Niccol admits it made his job a lot easier, allowing him to remove a narration that was present in earlier drafts of the script. He didn’t invent any new technology, he explains, he’s just made what we already have, “cooler”.

There’s a lot of detail in the on-screen text

Part of the advantage of Anon receiving a simultaneous release in cinemas and in the home is that pausing becomes an option, rather than having to watch the film in one uninterrupted sitting.

In Anon you might want to pause the film a little more often. There’s a lot of on-screen text to digest, and Niccol teased us with a couple of interesting tidbits that keen-eyed viewers might be able to spot in the trailer above.

For example, it’s only through stopping to read this on-screen text that I learned that the film’s cars are all powered through hydrogen cells. There are also interesting details to be learned about each of the characters in the movie from their bios.

“The prostitute has a really interesting one,” Niccol remembers, “She gives a military discount… there are some other good juicy details in her bio.”

It’s maybe not something you should do during your first watch (seriously, there’s so much text on-screen it’d take you hours), but there’s plenty there to keep you entertained through a second viewing. 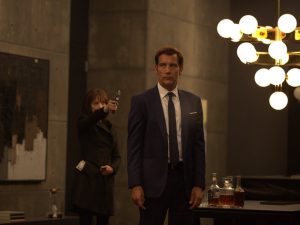 Niccol isn’t pro or anti-technology, it’s all about how it’s used

Given the pessimistic image of the world Anon presents, I expected Andrew Niccol to have a much bleaker view of technology’s potential, but when I asked him directly if he was for or against it as a whole, he painted a much more neutral picture.

The way he explains it, tech is a tool. “No technology is all good or bad, it’s how you use it or abuse it,” he explains.

“You can have nuclear power which in some respects can be clean but then you have a nuclear weapon. The technology is not going away. I can’t think of a technology we’ve invented that we’ve destroyed.”

Given that Niccol already thinks we live in a world that’s close to what’s shown in Anon, it’s perhaps reassuring to think that we can control what we’ve created, even if destroying it entirely is no longer a possibility.

There’s not a single screen in the entire movie

This one’s a little harder to notice the first time you watch it, but throughout the entirety of Anon there’s not a single traditional screen visible.

It makes sense as soon as you think about it. After all, with everyone able to see digital information projected directly into their eyes, old fashioned screens become completely redundant.

Nowhere is this more apparent than in one scene set in a stock-broker’s office, where row upon row of bankers sit at desks without a single computer monitor in sight.

Given the quality, Niccol remarks that “It’s almost appropriate in some way” that the film would see a Netflix release in conjunction with its cinematic debut. 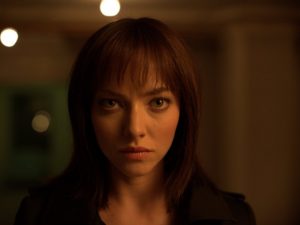 Used in the wrong way, tech erases our humanity

Before you let yourself get too optimistic, technology does have the potential to erase our humanity — at least according to Niccol.

At its best, technology eliminates little “happy accidents” that add diversity to the human experience and lead us to discover new things. Niccol uses the example of a bookshop that would introduce people to books they might not otherwise have read. Now, because we can go direct to a book’s digital page on Amazon we’re not distracted in the same way, and we’re less likely to have our horizons broadened.

But at its worse, technology can literally cause us to lose elements of our humanity, Niccol claims. In Anon we see characters lose the memories that they’ve entrusted to technology, but in real life the impact is more subtle.

“Someone mentioned recently that because of GPS we’re losing our ability to navigate just as human beings.” he says, “That was a human ability! Now, because we’re relying on GPS we’re actually losing something human.”

Anon is released to UK Cinemas and Sky Cinema on 11th May.