With unfortunate timing, given the sudden and overwhelming deluge of Amazon products announced last night, Anker has unveiled six new sets of Bluetooth earbuds in its Soundcore lineup. 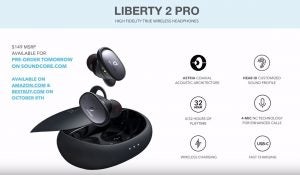 Top of the pile is the $149.99 Liberty 2 Pro, which apparently has a coaxial driver tuned by Grammy award winning engineers for a “sonically accurate” sound. “This new design provided us not only with crisp treble, full and rich bass and a delicately balanced midrange but true audio alignment of all frequencies,” promises Soundcore general manager Rock Gao. Featuring Bluetooth 5.0, aptX, wireless charging and an eight-hour battery life, these feel like a genuine AirPod competitor. 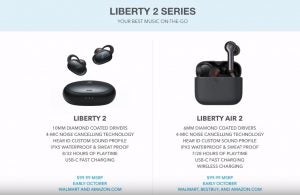 If you want to save $50, there’s the Liberty Air 2, which has a more traditional driver array and AirPod-like sticks coming out the buds, with a seven-hour battery and a wireless charging case. Alternatively at the same price, there’s the non-pro version of the Liberty 2 which lacks the fancy driver setup, but maintains the diminutive form factor. Both go for $99.99.

But Anker is also known for its low cost products, and that’s where the sportier Spirit range comes in. First up there’s the Spirit 2, which are the only traditional set of wireless earbuds without a charging case. A wire connects each earbud, and they’ll give you 14 hours of use before needing a charge via USB-C. Yours for $49.99. 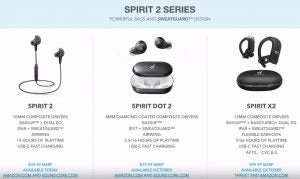 If you’re set on true wireless buds with charging cases, but don’t want to spend too much, then the Spirit Dot 2 might be for you. It’s a $79.99 set of buds with a 5.5-hour battery life with an extra 16 in the charging case.

Finally, there’s another $99.99 set of true wireless earbuds, the Spirit X2. These are clearly designed with gym goers in mind, with an ear hook design to keep them hooked in, and an IP68 rating.

If past form is anything to go by, all six should be decent earphones for the price, but we’ll know for sure when we get review units in. Watch this space.