Today, Google announced Android Things, a new platform designed to power the connected devices in your life. Here’s what it all means.

What is Android Things?

Android Things is a platform and an operating system. Developers will use it to build software for smart home devices (like a connected lock or smart thermostat), allowing them to avoid building their own OS from scratch.

The idea is that developers will have a familiar platform from which to create technology for smart home products, so they’ll be able to build new software and devices quicker and easier than before. That’s good for consumers like us.

Wayen Pierkarski, a Developer Advocate for IoT at Google, describes Android Things as a “comprehensive way to build IoT products with the power of Android,” adding: “Now any Android developer can quickly build a smart device using Android APIs and Google services, while staying highly secure with updates direct from Google.”

So is it completely new?

It’s new-ish. Google already had a connected devices OS called Project Brillo, which has been knocking about for about 18 months. But Google hasn’t really bothered with it, so it’s no surprise Google wants to rebrand the ecosystem.

Many of the tools that Android Things will rely on also aren’t new. Developers will be taking advantage of familiar services like Android Studio, Google Play Services, the Google Cloud Platform and, unsurprisingly, the Android Software Development Kit (SDK).

All this means it should be easy for seasoned developers to jump straight in and start building cool stuff.

How is it different from normal Android?

The key difference between Android Things and the proper version of Android on your phone is that you won’t really ever see Android Things. It will be in kettles or toasters or light bulbs; smart home products that might not (and often won’t) have a display, or any other type of obvious physical interface.

Is Weave being updated too? Also, what the heck is Weave?

Yes, Weave is being updated. For the non-devs amongst you, Weave is another existing Google platform that basically helps devices – like a speaker – connect to Google services. It’s already used by smart home companies like Philips (for Hue), Samsung (for SmartThings), and Honeywell (for thermostats). It provides a cloud infrastructure so that device makers don’t have to build their own – neat, huh? 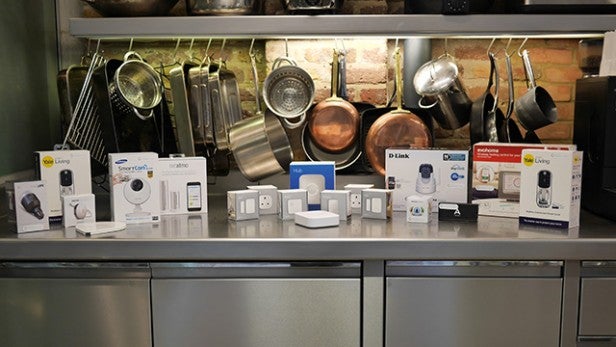 Android Things is all about the Smart Home gadgets

Well thanks to Android Things, Weave is also being updated to make it easier for all types of devices to connect with the cloud and Google Services – including the Google Assistant AI.

In the future, Google hopes to add support for new device types as well as a mobile application API for Android and iOS. That will make it easier for companies to build apps for your phone, based around their connected devices.

Does Android Things have a release date?

Yes, today! Google has released a Developer Preview of Android Things, which you can find here. Unfortunately, we’re not entirely sure when the full version will go live just yet – stay tuned.

What do you think of Android Things? Let us know in the comments.