AMD has finally taken the wraps off its long-awaited Ryzen Mobile chips along with three laptops from big manufacturers.

This isn’t some small play into the world of laptops: AMD is claiming to be offering genuinely competitive performance capable of taking on arch-rival Intel Core i chips. Until we’ve had one into test we’ll hold our final judgement, but the specs along make it clear AMD means business.

Here’s what you need to know about AMD’s mobile CPUs:

First, a brief catchup. AMD turned the world of desktop processors on its head when it launched its Ryzen processors nearly eight months. The company’s Ryzen 3, 5 and 7 chips took on Intel at its own game and briefly held the crown as the fastest mainstream processors you could buy.

The launch of Ryzen Mobile has been anticipated for some time. The company first announced what’s codenamed ‘Raven Ridge’ in May 2017. Since then, however, things have been very quiet.

Here’s the full spec alongside its Core i rivals:

You might have noticed the ‘2’ in front of each of the Ryzen model numbers. That’s because AMD considers these to be second-generation Ryzen CPUs with improved performance and technology inside.

There are lots of technical tweaks under the hood, including significantly improved Precision Boost 2 technology, which is faster at deciding which of the processor cores should be given more performance at any given moment.

While AMD has made some obvious claims about battery life (it’s more efficient than  previous generation ‘Bristol Ridge’), but beyond that it’s more or less up to laptop manufacturers to decide how they balance performance and battery. One potential snag is that these Ryzen Mobile chips only support DDR4 memory, which by all accounts is less power-efficient than LPDDR3, especially when a laptop is in Sleep mode. It’ll be interesting to see how this pans out.

AMD is making some fairly large claims about the processing performance and graphics capabilities of its new chips.

In terms of single-core speed, which is what makes your PC feel snappy when opening programs and the like, the CPU is on a par with the equivalent Intel chip, albeit slightly slower in the Cinebench single-core benchmark. With all cores firing, the Ryzen 7 2700U has a significant advantage over the i7-8550U, although we’ll need to investigate further in our own controlled conditions to see how other variables affect performance. 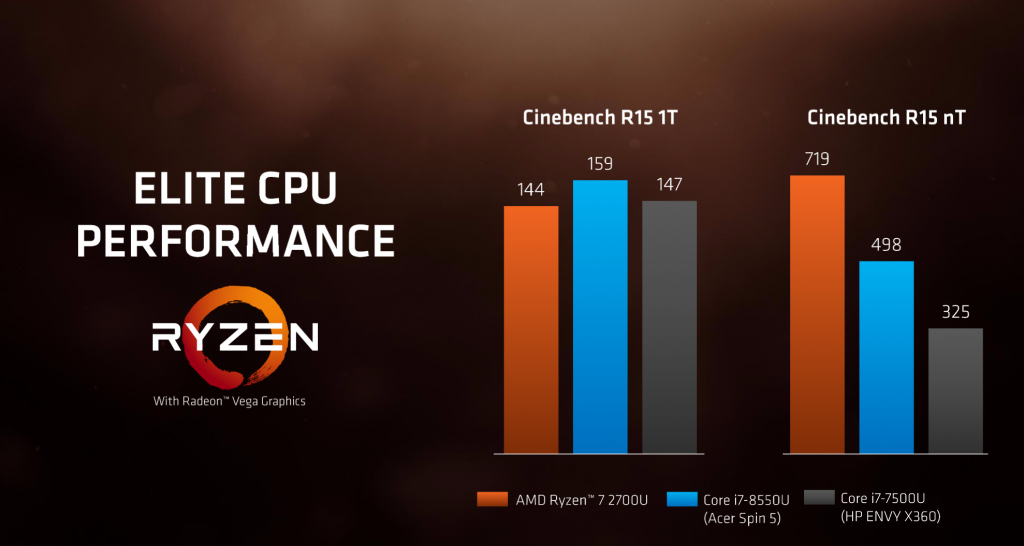 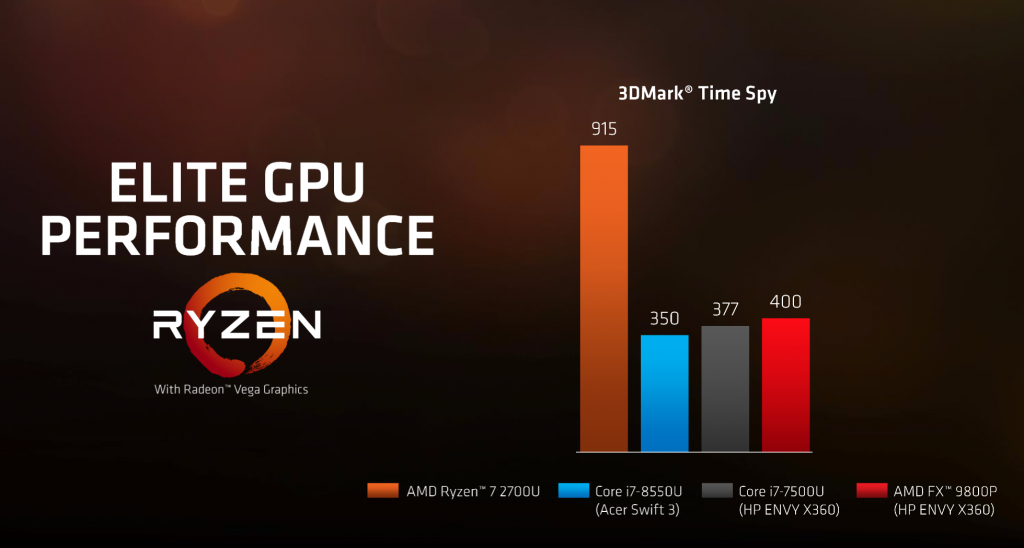 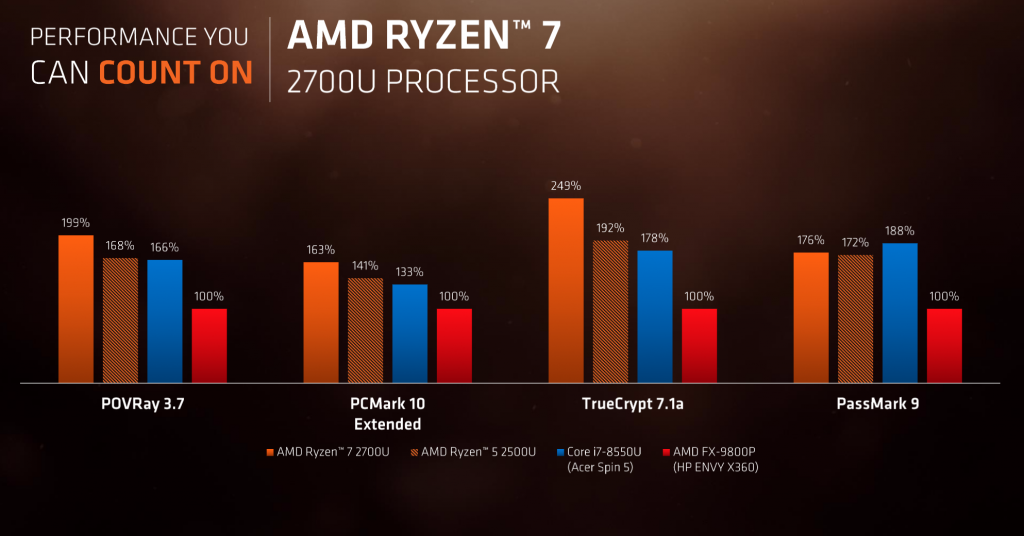 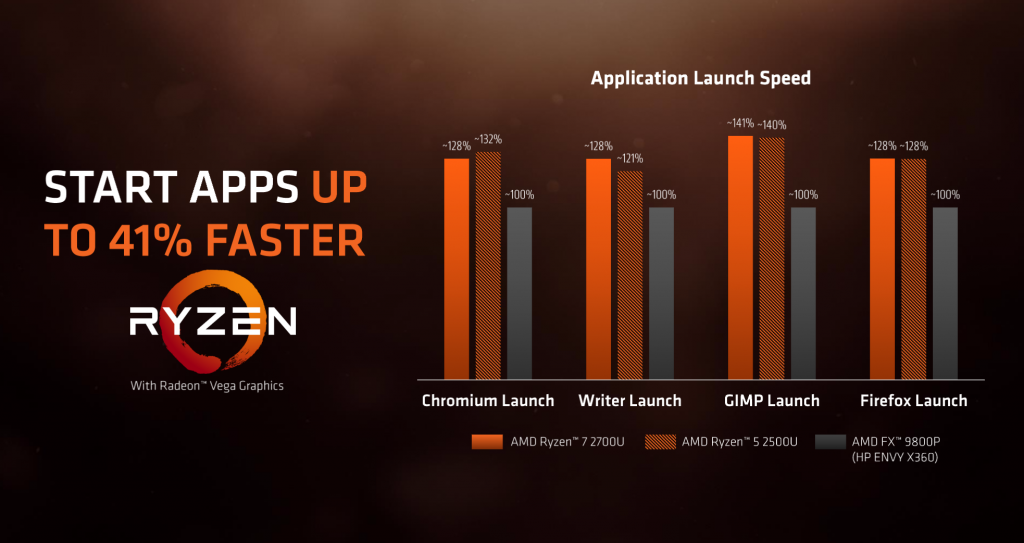 Unsurprisingly, AMD and presumably the laptop manufacturers will be marketing these new chips as video-editing power houses.

And there’ll also be potential for gaming. Vega-based graphics chips with 10 and 8 cores respectively on Ryzen 7 and 5 chips will, apparently, offer around 2.6x the performance of Intel’s integrated graphics at least one one specific benchmark.

These processors aren’t going to be AAA gaming powerhouses, but they’ll get the job done in some eSports titles, as AMD’s below graphs claim. 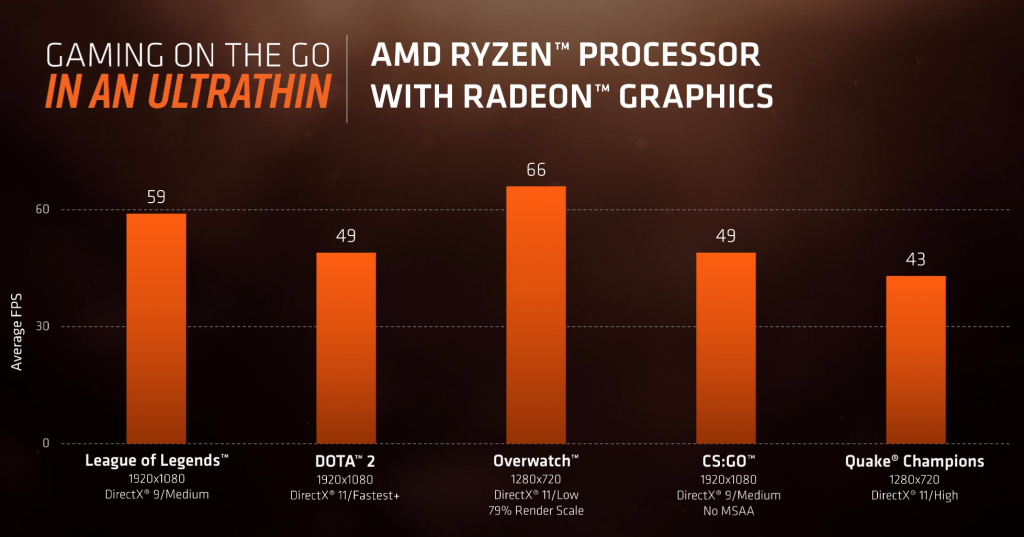 Three Ryzen laptops have been announced. Two of them aren’t particularly special and represent the sort of mid-range, chunky laptops that AMD chips have been found inside in the past.

The third, however, is the Lenovo IdeaPad 720S. This laptop is our top Ultrabook recommendation with 7th-gen Intel chips on board, so if a Ryzen model makes it to British shores at the right price, it could be a seriously competitive piece of kit, especially if the claimed graphics performance is as good as AMD claims. 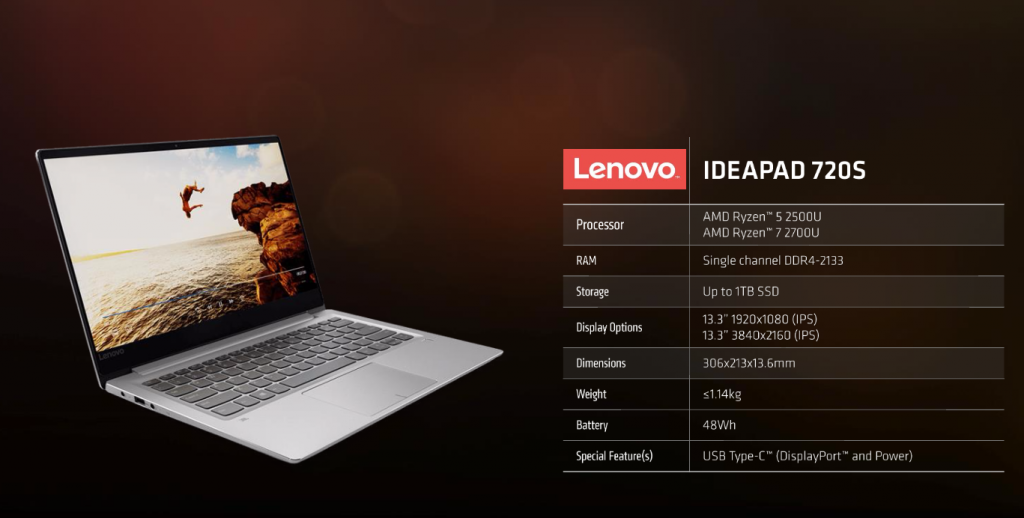 The HP Envy x360 is the second laptop to be announced with AMD Ryzen on board. It’s a minor refresh of a pre-existing design, and at 2.15kg it certainly isn’t an exciting thin and light ultrabook. 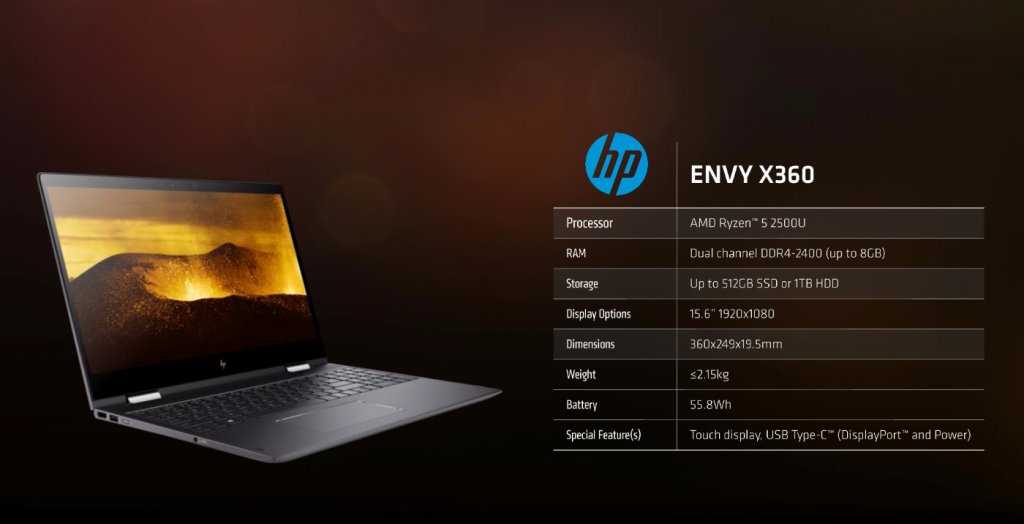 The 15.6-inch Acer Swift 3 is another fairly chunky machine that’ll be graced by Ryzen.

AMD says the first Ryzen Mobile laptops will be available for the 2017 holiday season, with more launching in 2018.

Why is this important?

AMD has supplied processors in laptops for years, but it’s only ever been sidelined to chunky budget machines that do little to enhance the AMD brand. With Ryzen Mobile, it’s now possible for AMD chips to squeeze into Ultrabook-class laptops and finally rival Intel.

However, as ever, it’s not entirely in AMD’s hands. Dell and Asus are missing from the launch lineup and haven’t publicly committed to a Ryzen Mobile laptop model. In order for Ryzen Mobile to be a success, AMD will need all of its partners to make a significant commitment to the architecture in lots of machines, and sell them in lots of places.

And, in order to do that, the public at large needs to understand what Ryzen actually is versus Intel’s own offerings. By copying Intel’s 3, 5, 7 naming convention, AMD has made that easier, but getting average shoppers to even recognise the AMD brand will definitely require a big marketing push. Expect to see plenty of AMD ads next year.