The new AMD RX 5700 vs Nvidia RTX 2060 Super graphics cards face off is a real head scratcher, as you might be wondering which is the best buy.

The answer depends mainly on your budget, but also what you want to get out of your PC gaming rig.

If you’re happy with gaming on a Quad HD or Full HD monitor and you’re simply after the cheapest possible deal, then your choice is clear – pick up the RX 5700.

If, however, you’re after a decent GPU for Full/Quad HD gaming, you’re keen on overclocking and intrigued by real-time ray tracing, then you will be better served by the RTX 2060 Super – or, at least, you will by the Asus Dual RTX 2060 Super O8G-EVO, the first RTX 2060 Super model we’ve been able to review.

Here’s what you need to know about both cards, how their key specs differ, and how they compare on price. 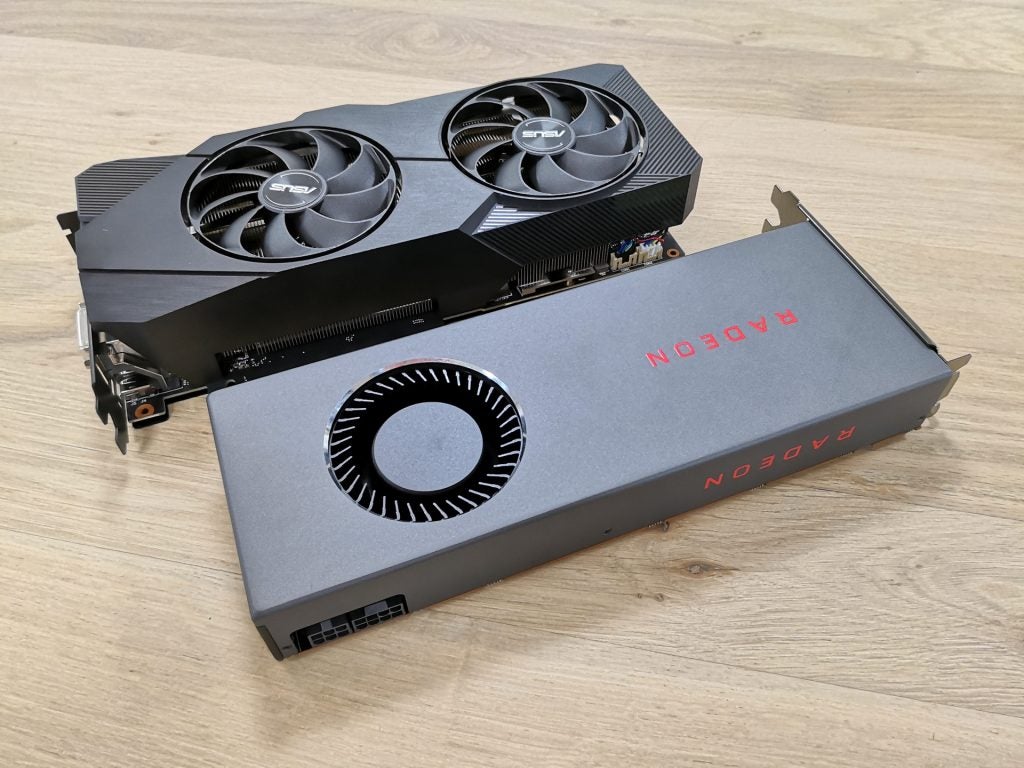 The Radeon RX 5700 is currently the cheapest of the RX 5000 series of AMD cards, and is very much aimed at gamers who are happy to play titles at Full HD and Quad HD resolutions, but it is not for overclockers and 4K purists.

This is very much a plug ‘n play graphics card that’s ideal for casual gamers who don’t want to drop a small fortune on a GPU, but want solid performance at the same time.

The RTX 2060 Super cards are overhauled versions of the RTX 2060 range of cards Nvidia launched in January this year. The RTX 2060 cards have always represented the entry point to the 20 Series range, Nvidia’s current flagship line of graphics cards, so RTX 2060 Super represents a timely tune-up to coincide with AMD’s launch.

Designed specifically with overclocking in mind, this card is aimed squarely at gamers who want a taste of real-time ray tracing and want to be able to push beyond basic out-of-the-box performance, but also won’t be building a bleeding-edge 4K gaming powerhouse. 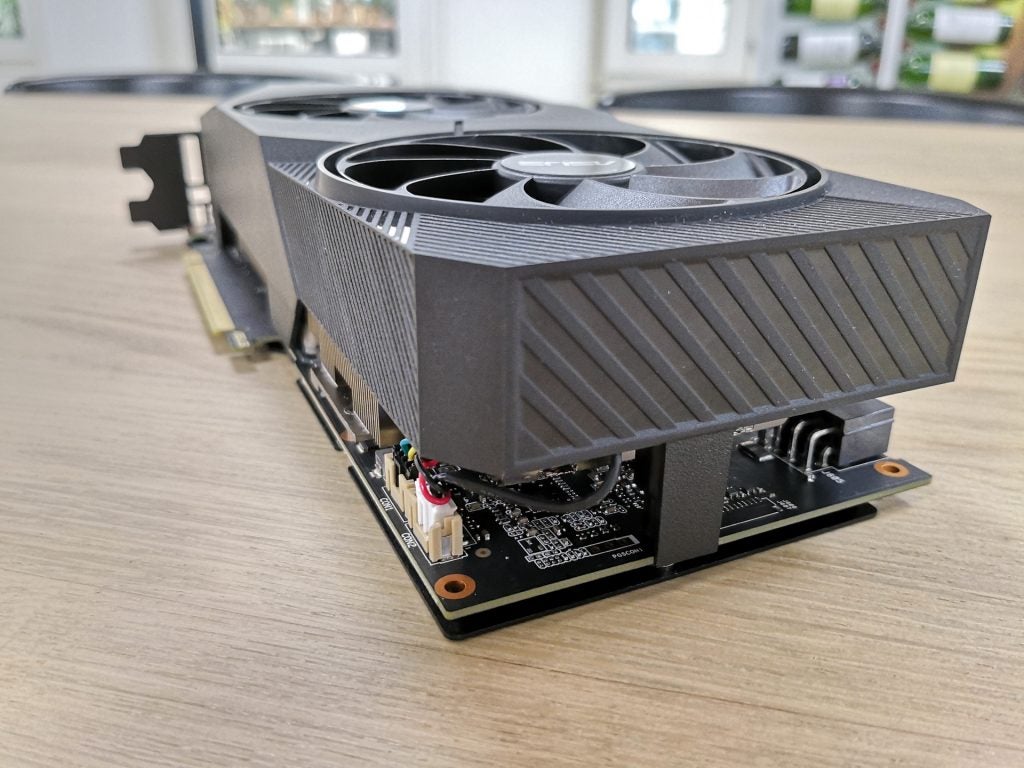 A close-up look of the Asus Dual RTX 2060 Super O8G-EVO. The twin fans mean you can safely get a 100MHz overclock without any additional coolers.

Here are the basic specs for both the RX 5700 and the Asus Dual RTX 2060 Super O8G-EVO, as well as the specs for the RTX 2060 Super Founders Edition to give you an idea of what you boosted specs you’re getting with the Asus third-party model.

We’ve reviewed all of the cards here with the exception of the RTX 2060 Super Founders Edition, which we intend to get in for testing as soon as possible.

The Founders Edition graphics cards made by Nvidia are best thought of as ‘vanilla’ versions of their cards – models made by third party manufacturers like Asus, EVGA, Palit, MSI, PNY, and others tend to offer more features, faster clock speeds and usually retail at higher prices:

While these graphics cards are broadly similar in terms of clock speeds and memory bandwidth, there are key differences which are worth exploring.

AMD’s new Radeon RX 5700 is one of the first graphics cards on the market to feature the new Navi architecture. As well as offering the usual performance boosts you’d expect from a new generation of graphics cards –  lower latency and better performance per Watt – the Navi architecture allows you to connect faster PCIe gen 4.0 SSDs once available.

In practical terms, this means that as well as game save files loading more quickly, in-game elements, environments and other assets should load also take less time to load, meaning no more staring at loading screens in between game worlds.

On the other hand, the Turing architecture which Nvidia’s 20 Series cards are based on feature processor cores dedicated to enhancing ray tracing – a very nice feature which AMD cards don’t currently support.

At the time of writing, ray tracing continues to be a curate’s egg – it looks sensational, but enabling it on the handful of games that properly support it, Battlefield 5 and Metro Exodus being the most prominent, can see your fps rates crash and burn like a stricken Stuka bomber.

In our tests we saw Battlefield 5 (running in Quad HD) trundle on at a nice 80fps without ray tracing or DLSS on, and stumble to 55fps when we flicked the ray tracing switch. Throwing DLSS into the mix saw average frame rates climb back up to 65fps, which is impressive, but not quite as impressive as 80fps.

Furthermore, DLSS also contributes to a small, but noticeable, loss in detail. That said, we’ve seen several patches and drivers hit the wires ever since the 20 Series launched, so DLSS is something that will get better over time.

While the RX 5700 does not bring ray tracing to the party, you do get to play around with a neat new feature, Radeon Image Sharpening (RIS). As the name implies, RIS sharpens small details in gaming.

It’s not as overt or immediately impressive as ray tracing, but by the same token, Radeon Image Sharpening doesn’t eat into frame rates in the same way ray tracing does. In our reviews of both the RX 5700 and the more powerful RX 5700 XT, we saw negligible drops of between 1-2fps when RIS was turned on.

The RX 5700 has three DisplayPorts and one HDMI port, allowing you to enjoy Full HD, Quad HD and 4K gaming on a variety of monitors

Speaking of frame rates, how did these graphics cards get on in testing? We tested both GPUs in the same rig to keep things as repeatable as possible:

We picked Shadow of the Tomb Raider and The Division 2 as examples of GPU-intensive titles. Both games are also optimised for Nvidia and AMD systems respectively, while Dirt Rally was picked to represent games launched a number of years back that aren’t as resource-intensive.

In every benchmark test, the highest top graphics preset option was picked (i.e. Ultra, Highest, etc), while features which could influence the frame rates like Vsync or Anti Lag were disabled.

Shadow of the Tomb Raider

As you can see, there’s not much in it. Sometimes the RX 5700 inched above the Asus Dual RTX 2060 Super O8G-EVO, others, the reverse was true. Ironically, the AMD card performed better for the Nvidia-optimised game, and vice versa. The RX 5700 seemed to have the edge most of the time, but this will be dependent on the games you play.

Pound for pound, the RX 5700 is by far the better value option if you don’t ever intend to overclock your system. In our review, we were only able to squeeze an extra 3fps on average with a 100MHz overclock using MSI Afterburner, which saw the temperature go worryingly beyond the 80°C danger zone.

In our review of the Asus Dual RTX 2060 Super O8G-EVO, we were able to get an extra 10fps on most titles with a relatively modest 100MHz overclock. If we pushed beyond this, things became unstable, but, all the while, the temperature never got beyond a relatively cool 64°C.

There are more tweakable graphics cards out there for sure – we got a 220MHz overclock on the Unigine Heaven benchmark with the uber-powerful RTX 2080 Ti – but, the Asus Dual RTX 2060 Super O8G-EVO will see you able to get a slight edge on the competition in multiplayer games, without breaking the bank.

As and when we test more RX 5700 and RTX 2060 variants, we’ll expand this feature with out findings, but based on these observations, your choice is clear – if you’re not fussed about overclocking, pick up an RX 5700. If you want to experiment, then an RTX 2060 Super may be more of what you’re after, but be prepared to spend more.