Everything you need to know about the Amazon Fire Phone

Sadly, the Fire Phone is a US exclusive for now, so we’ll have to watch from afar as to how successful Amazon’s first smartphone is with consumers.

However, in anticipation of it eventually making its way over this side of the pond, we’ve gathered together all the features, specs and other details on the Amazon Fire Phone for you.

We will be updating this page with all the latest Amazon Fire Phone release date details, leaks, news and rumours as new information emerges. Bookmark it now to stay in the loop on all the Amazon smartphone gossip.

Amazon Fire Phone Release Date: When will it come out?

It’s been a while since the Amazon phone was officially launched in June, but the Amazon Fire Phone release date has finally arrived, with the device touching down in the US on July 25.

At the launch event, UK consumers, developers and tech journalists alike were keen to find out whether the currently US exclusive would eventually come to the UK.

“We’re launching today in the U.S. We will have to ask you to stay tuned,” an official Amazon spokesperson stated at launch.

Although the company stated that it would “not comment on future plans”, it certainly didn’t rule out a UK launch for the device at a later date.

What’s also reassuring is that Amazon has done this sort of launch pattern with previous devices, including the Amazon Kindle Fire tablet line. It first launched in the US with a UK rollout following months later.

Hopefully then we should see the Fire Phone launch in the UK before Christmas.

Of course, Amazon isn’t the only company doing this either, as devices like the Motorola Moto X have followed the same launch pattern in the past. 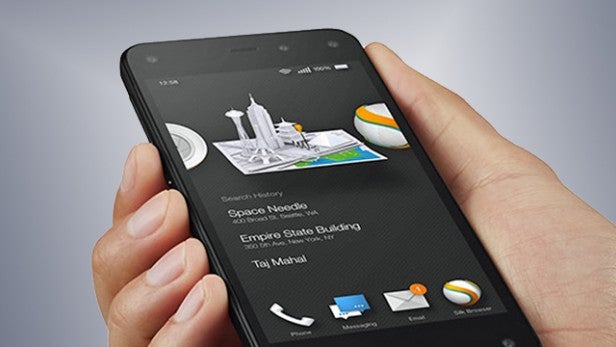 The major unique selling point of the Amazon Fire Phone is its dynamic perspective UI, which offers a 3D effect to on-screen content.

If you’re thinking the Fire Phone will be like the Nintendo 3DS, you’d be wrong. The UI is a lot more subtle and refined and the 3D effects are used to enhanced content rather than making it come out of the screen like most 3D usages.

For example, the Fire Phone’s 3D effects is used to give depth to maps, more perspective to images and lets you view items from all angles on certain online retail outlets, like Amazon itself of course.

Amazon released a special SDK for the Amazon Fire Phone, which lets developers add these 3D effects to their apps. Yelp already jumped on board, meaning you can tilt the phone to look at Yelp user ratings for restaurants and other local business within the maps app.

The dynamic perspective is also used to make one-handed use a lot easier. Tilting left and right gives you access to hidden menu panels, which let you navigate apps or access additional features like adding photos to text messages. Swivelling brings up the Quick Settings Menu and the Notifications panel, while peaking offers access to quick actions as and when you need them. 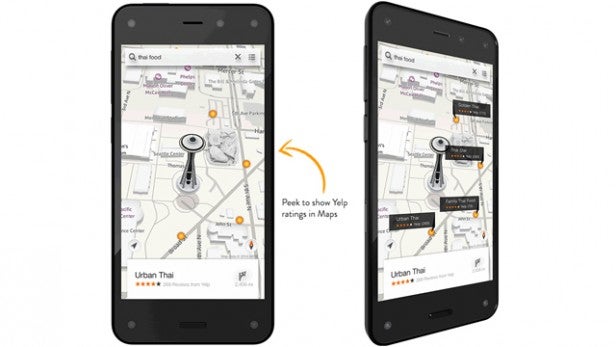 The other major new software feature is FireFly, which utilises the 13-megapixel rear camera to scan items. Whether that’s books, games, barcodes, URLs or QR codes, anything you scan will be added to a special list. Of course, the idea is that you can then buy said items directly from Amazon’s online store at your earliest convenience.

What could be more useful is that Firefly can pull information scanned in from posters, magazines, gift cards or other pint-based formats and add phone numbers, dates or other details to your phone. Firefly also works like Shazam, recognising songs, offering artist information and allowing you to add it to your wishlist.

Firefly is accessible via a dedicated button on the right hand side of the Amazon Fire Phone for easy reach too, which is a pretty smart idea. 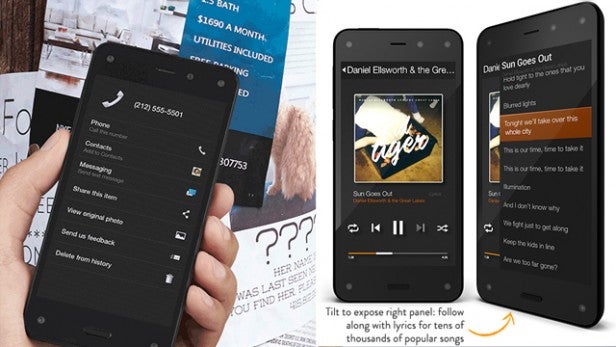 Aside from the unique stuff, the Amazon Fire Phone specs are pretty standard for a mid- to high-end smartphone.

Unlike the latest batch of flagships like the HTC One M8 and Samsung Galaxy S5, the Amazon Fire Phone has a 4.7-inch LCD IPS display with a 1280 x 720p HD resolution rather than anything larger or higher resolution. Amazon claims this size is the perfect dimension for one-handed use, which the company is obviously stressing for its dynamic perspective features.

The Fire Phone runs on a 2.2GHz quad-core Qualcomm Snapdragon 800 processor with 2GB of RAM and Adreno 330 graphics. It comes with 32GB or 64GB of internal storage, but lacks any microSD support. You can take advantage of free Amazon Cloud storage for all your Amazon content and photographs though.

Powered by a 2200mAh battery, the Fire Phone has a 13-megapixel rear camera with a five-element, f/2.0 lens, optical image stabilisation and LED flash. That is paired with a 2.1-megapixel front-facing snapper.

Taking design hues from the iPhone 5S and co, the Amazon Fire Phone has a glass back panel and a rubberised frame, although the latter is interspersed with aluminium buttons. 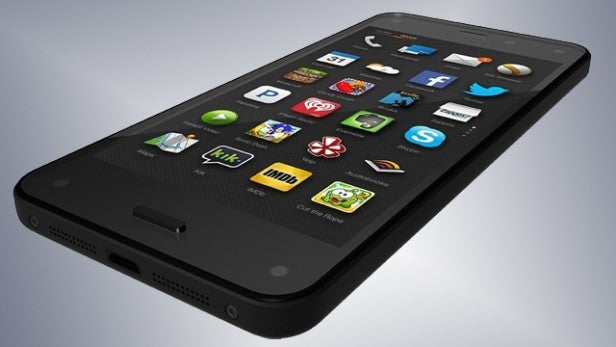 Although we only have US details for the Amazon Fire Phone price, we can hazard a guess at how much the device could cost over here.

That means we could see the Fire Phone retail for around the £400 mark in the UK, if and when it launches over here. Of course, currently the phone is exclusive to AT&T, so we could see the tariff costs fluctuate here as it will no doubt launch with a variety of networks and retailers.

It’s not too badly priced to be honest, but can’t quite compete with its more affordable tablet range, including the Amazon Kindle Fire HDX 7, which is just £199.

Feel free to share your thoughts on the Amazon Fire Phone and its features. Of course, you can get equally vocal via our Facebook and Twitter feeds too.