Alcatel didn’t have a big blow out press conference like Samsung or Sony, but it did have plenty to talk about at this year’s IFA. Here’s our pick of the biggest announcements

Alcatel OneTouch Xess is a big ol’ tablet
With Samsung
prepping its large View tablet and rumours of an iPad Pro continue to
swirl, Alcatel is getting in on the action with its Xess tablet.

Aimed
at a slate for the entire family, the 17.3-inch, 1920×1080 Xess has a
flip out stand in the back where you’ll also find a carry handle, two 3
watt speakers, a microSD card slot, micro USB 2.0 port and a magnetic
stylus.

Running on Android Lollipop with a 1.5GHz octa core
processor, Alcatel is preloading the huge tablet with software to take
full advantage of the screen estate including cooking and sketching
apps. There’s also gesture support courtesy of the 5-megapixel
front-facing camera so you can flick through the pages of a recipe
without getting the screen dirty.

The
Xess is initially going to go on sale in China first before heading to
Europe and the US and is likely to cost around £600-£700.

First impressions:
The Xess is a tablet that shows the potential of why a big tablet makes
a lot of sense. If you don’t want to own a TV and get by with
streaming, then it’s a good alternative. The screen was sharp and it’s
packed with features, but it was very sluggish to use. Especially
swiping through homescreens and launching apps. It’s not cheap though
and if it does make its way to this part of the world there could be one
or two more high profile giant tablets around to something a little
more impressive.

Alcatel OneTouch Go Play is a smartphone built for underwater shooting
Joining the Idol, Pop, Hero and Pixi phone series, Alcatel is introducing the Go range and it’s firmly aimed at the more youthful end of the market.

Available in a eight different colours, the Go packs a 5-inch 720p HD display and runs on a 1.2GHz Snapdragon 410 quad-core processor with 1GB of RAM. It’s running on Android Lollipop and has a quirky screen recording feature where you can capture anything you’re doing on the phone and share it via social networks. 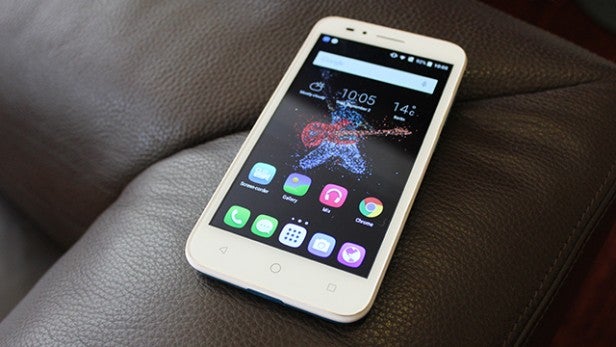 Aside from the colourful design, the Play is also IP67 certified water and dust proof. That does mean you can jump in the pool and take photos with your pick of an 8-megapixel main or 5-megapixel front-facing camera. Video playback can also be shot in a maximum of Full HD 1080p at 30fps.

There’s 8GB of internal storage with microSD card support up to 32GB with a 2,500mAh battery promising 8 hours of talk time and 20 hours in standby.

The Go Play will cost 199 Euros (around £150) and will be available to buy later this month.

First impressions: The Go Play is a solid-looking Android phone at first glance. Despite its bright yet durable body, it’s nice to hold and has a good quality screen. The screen recording feature is a nice addition to the Android setup as well, although swiping through homescreens does feel a touch sluggish. Here’s hoping those issues can be addessed before this budget phone goes on sale. 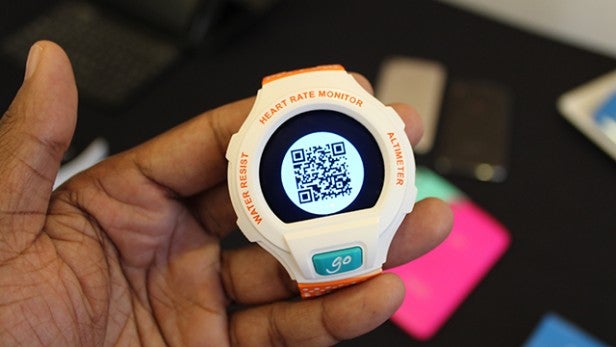 Alcatel Go Play smartwatch is a cheaper OneTouch Watch alternative
Joining the Play phone is the Go Watch. This is not the first smatwatch Alcatel has launched after unveiling the OneTouch Watch, but this is a very different prospect to have around your wrist.

Alcatel has slapped the Go with an IP67 certifiication so it’s waterproof, dustproof and shockproof. Like the OneTouch Watch, the Go Play will work with iOS (version 7.0 or above) and Android phones running Jelly Bean 4.3 or above letting you read messages, emails and updates. It’s running on Android but doesn’t support Android Wear, so you’ll have to live without the software feature apps available through Google’s smartwatch-centric OS.

Other notable design features include the replaceable casing and wristband, while a rear-mounted optical heart rate sensor is also on board. Along with the gyroscope and accelerometer, the sensor can be used to create an ’emotional graphic’ to share over social networks like Facebook.

Packing a 1.22-inch 240×204 IPS screen, it’s not exactly competing with the Apple Watch for screen quality and it’ll keep going for 2-5 days thanks to a 225mAh battery that charges via the micro USB charging port tucked into the back.

First impressions: We tried the Go Play smartwatch that’s clearly inspired by a certain Casio G-Shock watch. It’s has the same chunky exterior however the software and the screen quality pales in comparison to most other smartwatches. It’s not as attractive as the OneTouch Watch and while it’s clearly built to last, we’re not sure how many people are going to be rushing out to wear one.

Alcatel OneTouch Idol 3C is a flagship with colourful covers
With almost identical features to the Idol 3, Alcatel is now offering its solid flagship phone with a range of brightly hued cases and a cheaper price tag. It packs the same 5.5-inch full HD screen and JBL-powered speakers as the Idol 3 to cover video watching and music playback.

It also packs a 13-megapixel main camera along with an 8-megapixel front-facing sensor that we found grabs some pretty good quality images on the Idol 3. There’s a Snapdragon 615 processor powering performance alongside 2GB of RAM. 16GB of internal storage will give you ample storage for content ans is backed up by micro SD card support.

The Idol 3C is running on Android Lollipop and still has that handy reversible feature that switches the software orientation when you pick up the phone the wrong way round. The more colourful Idol 3C doesn’t have an official price or release date but it’s expected to be around the same £250 as the Idol 3 cost.

First impressions: If you’ve seen the Idol 3 then this is very familiar territory. Not a lot has changed apart from the removable backs, which can be easily removed from the body. Software issues prevented the Idol 3 from getting a higher score in our review, so hopefully those have been fixed and a quick play suggests it has been looked at. That should make it an attractive propostion for someone that wants a more eye-catching phone with some pretty impressive specs. 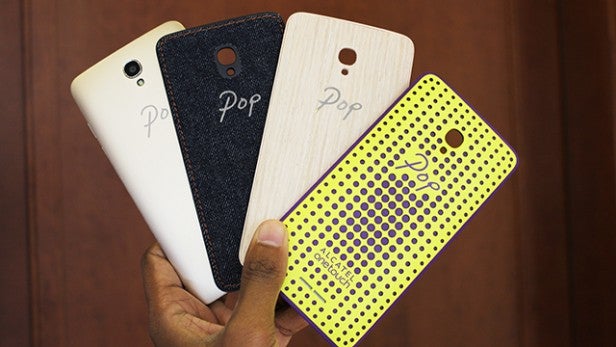 Pop Star and Pop Up adds a splash of colour and more premium design
Yes, there’s more phones and this time it’s the Pop series that adds a new Star and Up handsets. The Pop Star is a 5-inch Android phone with a 720p HD screen and comes with a host of different removable backs including leather, fashion and nature-eco collections. Each of the covers include a QR code on the inside, which can be scanned and will customize the software UI to match your new-look back.

Available in 3G and 4G models, there’s a quad-core Mediatek MT6580 (3G) or MT6735P (4G) processor with 1GB RAM. Android Lollipop is on board with 8GB storage and micro SD card support up to 32GB

In the camera department there’s an 8-megapixel main sensor and 5-megapixel camera on the front. A 2,000mAh battery is nestling in the back promising 10 hours talk time and 500 hours in standby. 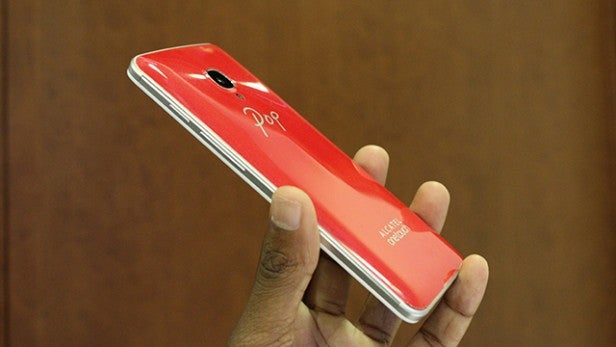 Next up is the UP, which also has a 5-inch 720p HD screen but also has a sleek, metal frame with a 3D spin effect on its plastic back.

A 13-megapixel camera with f/2.0 aperture lens promises to give it Idol
3-like image quality with a 5-megapixel sensor up front to cover selfies
and video calls.

The Star will cost around £95 with the Up in at a more expensive yet still reasonably priced £130.

First impressions: The Up is the pick of the two Pop phones thanks to the more impressive specs. While the glossy plastic back is an acquired taste, the metal trim and Idol 3-inspired body makes it a decent-looking handset. The Star will inevitably draw more attention especially if you go for the denim or wooden backs. Those covers don’t feel as tacky as we’d anticipated however there’s not much to get excited about in the specs department. 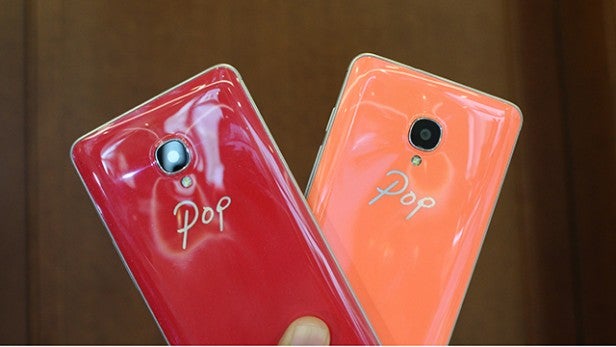 Alcatel OneTouch Pixi First is slim 4-inch Android smartphone
At
the more affordable end of the Alcatel smartphone family is the Pixi
First. It’s a truly budget 4-inch phone that measures in at 9.7mm thick and is
available in silver, gold and rose gold options. There’s a pretty average 4-inch 800×480 WVGA screen along with a 5-megapixel rear and
2-megapixel front-facing cameras.

A
1.2Ghz Spredtrum 7731 quad-core processor keeps things ticking over
along with 512MB of RAM. There’s just 2GB of internal storage here so
thankfully there’s microSD card support to boost things up to 32GB.

Elsewhere,
it’s running on Android 4.4 KitKat, comes in a dual-SIM option and has a
1450mAh battery to give you 300 hours standby time or 7 hours talk
time.

So how cheap is it going to be? Alcatel hasn’t stated that the Pixi First price just yet, but we’d fully expect this basic handset to be well under £100.