It’s that time of year again: The TrustedReviews team is out at Berlin’s annual IFA 2015 technology trade show, with Acer kicking off proceedings.

The company’s corporate president and CEO, Jason Chen, spoke first at the event. He revealed “continuous improvement of operating income and gross margin”.

Chen explained that Acer’s mission “is to bring innovation into the hands of many”.

The first announcement was that Acer will sponsor the International Olympiad in Informatics.

This is a contest involving 100 countries, where the brightest and smartest high-school students compete to benchmark their IT knowledge.

Chen also waxed lyrical about some of the company’s successes, including the fact that Acer has led in the global Chromebook market for five quarters straight.

Its 2-in-1 detachables also did pretty well, with 1H 2015 global sales up 180%. It also bagged top spot for market share in Europe in that sector.

For instance, Acer’s Intel RealSense-friendly products will have access to 45 dedicated applications.

The company will also be collaborating on Acer’s gaming-focused line of Predator products.

Acer Revo Build is an expansion of the company’s mini-PC Revo series, but with a twist. 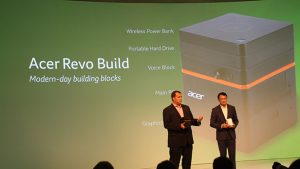 In an approach similar to Razer’s unreleased Project Christine, the Acer Revo Build is a completely modular PC.

This means you can add a wireless power bank, portable hard drive, voice block, computer components and even a graphics chip. They all work as modules, so it’s a bit like building a PC using hi-tech Lego.

Chen was joined on stage by Microsoft’s Nick Parker, the corporate vice president of the OEM Division.

“I think we’re most proud recently in the Acer Aspire 1 Cloudbook line, really the incredible value you get.”

He also revealed that users had streamed 122 years of gameplay from Xbox One to Windows 10 devices.

“Mobility is extremely important, and Continuum provides that experience,” explained an Acer exec. “It’s a whole productivity suite that comes with the phone.”

The Continuum speech led Acer onto the Jade Primo, which Chen described as the world’s “first PC phone”. 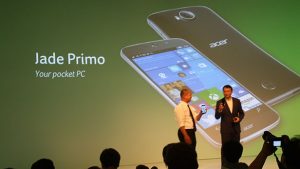 The handset features a 5.5in Super AMOLED display, a Snapdragon 808 processor, a 21-megapixel camera, an 8-megapixel rear-facing camera and a Liquid Jade-style design.

It also comes with a keyboard, mouse and docking station. Basically, everything you need to run the phone as a PC.

Gaming is also a big deal for Acer now – the company announced its Predator game initiative about six months ago.

Chen explained that the company is now “the number 1 gaming PC company in Germany” for market share.

Acer showed off its new V Nitro gaming laptop, which comes with a number improvements.

For instance, the keyboard is more responsive than the previous version. “It’s really important that you don’t miss your key. Life and death,” said an Acer spokesperson.

The company also claimed an improved wireless connection, and a brand-new USB-C port.

But that’s not all. Acer spent plenty of time talking up the cooling credentials of its new laptop. 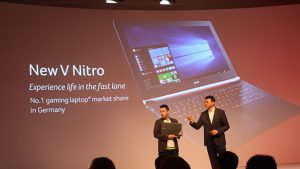 For example, it uses a brand-new fan that uses metal blades.

“When we processed this fan using metal, we can make the blades the thinnest in the world,” says the spokesperson. “We can pack 50 blades on this fan. This has extreme efficiency.”

At only 0.1mm thick, the blades purportedly increase air flow by 15%. This supposedly leads to a 9% increase in thermal performance.

The Predator FrostCore, which is a swappable third fan that can replace your optical drive to offer even more cooling – with the result being a claimed 5% increase in performance.

It uses ultra-short-throw technology, which means that you can place the unit 50cm from a wall and enjoy 120in of eye-watering projected display.

“You’re hanging out with a few of your best friends at one of your houses. A little organised LAN party. You’re trying to play a game together. Right now your options are fairly limited. There’s not enough room,” says an Acer spokesperson. “This projector solves that problem.”

The new products didn’t stop there. Acer also showed off another smartphone, this time designed for gaming – the Predator 6. 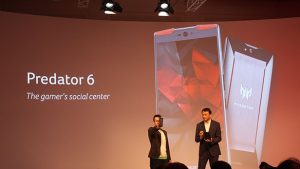 Details were light, but it’s shipping with MediaTek’s deca-core Helio X20 processor inside, as well as 4GB of RAM and a 21-megapixel camera.