Earlier models from the ConceptD range we got to see last year included the ConceptD 7 and ConceptD 9. These two laptops featured slimline Max-Q versions of the Nvidia RTX 2060 and RTX 2080 dedicated graphics processors.

While these are powerful GPUs, the RTX 2060 and RTX 2080 are better suited to gaming – Nvidia’s Quadro RTX GPUs have been specifically optimised for professional tasks like video editing and CAD (Computer Assisted Design) work. If you’re looking for a laptop that’ll chew through edits in DaVinci Resolve or run nanoCAD without breaking a sweat, a ConceptD Pro laptop may be your weapon of choice.

We got a taste of the Acer ConceptD range of creative devices back in April this year. Perhaps trying to take a swing at Apple, the ConceptD devices are nicely designed, high-performance machines aimed at professional creative workers.

Since Acer’s IFA 2019 keynote, Trusted Reviews got to briefly see two other new ConceptD laptops not announced during the keynote, the ConceptD 5 Pro, and ConceptD 3 Pro.

How do all of the Acer ConceptD’s compare and when are they coming out? 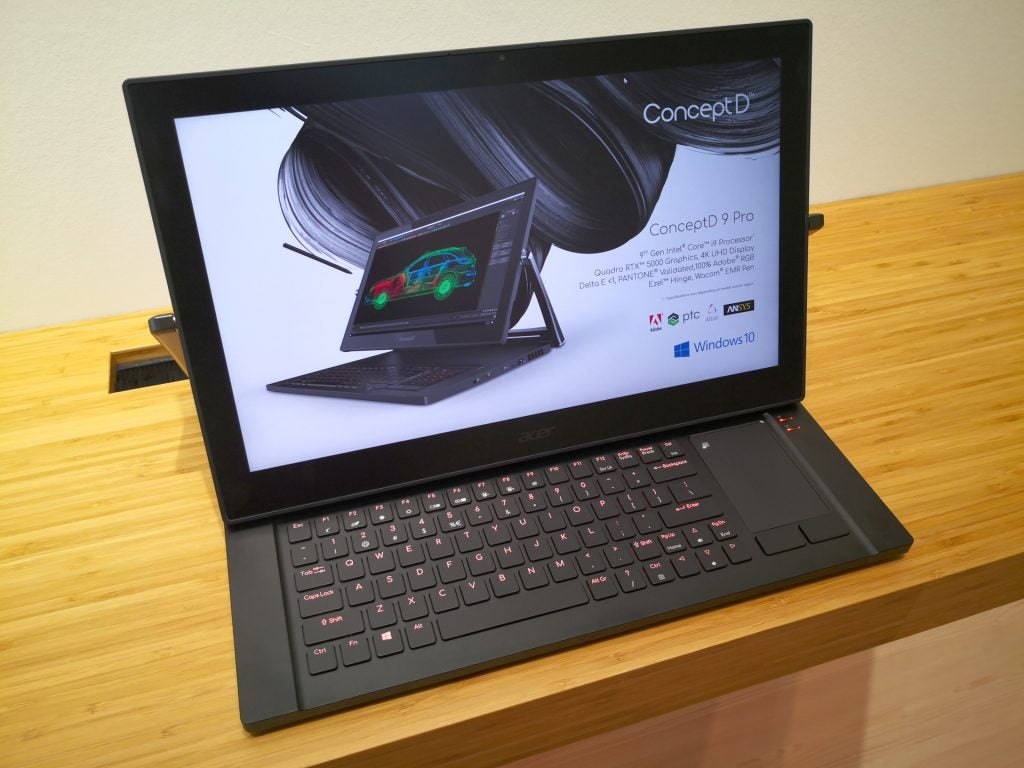 Like the original, the Acer ConceptD 9 Pro is a 2-in-1 with a display set into a swing mount, which means it can be used as either a laptop or a tablet, and thanks to the design, it won’t see the keyboard facing down when you’re using it in tablet mode.

Unveiled by Acer CEO Jason Chen, the Acer ConceptD 9 Pro’s 4K UHD display promises to cover 100% of the Adobe RGB colour space, and an ‘ultra low’ Delta E score. It’s also been Pantone-rated, which means that the display of the ConceptD 9 Pro promises to be super colour-accurate as well as detailed.

The Acer Concept D 9 Pro will be run by an unspecified 9th gen Core i9 processor, quite possibly a i9-9980HK. While the processor will likely be powerful, some will wonder why 10th gen Ice Lake and Comet Lake chips aren’t present here.

Regardless, Acer is confident that the processor, paired with an Nvidia Quadro RTX 5000 graphics processor.

The ConceptD Pro 9 has apparently been tweaked to optimise multitasking performance, so regardless of whether you’re using Adobe Premiere Pro to cut and edit 4K and 8K footage, then bring that footage into Adobe After Effects to add SFX, and then export everything to be encoded in multiple formats. 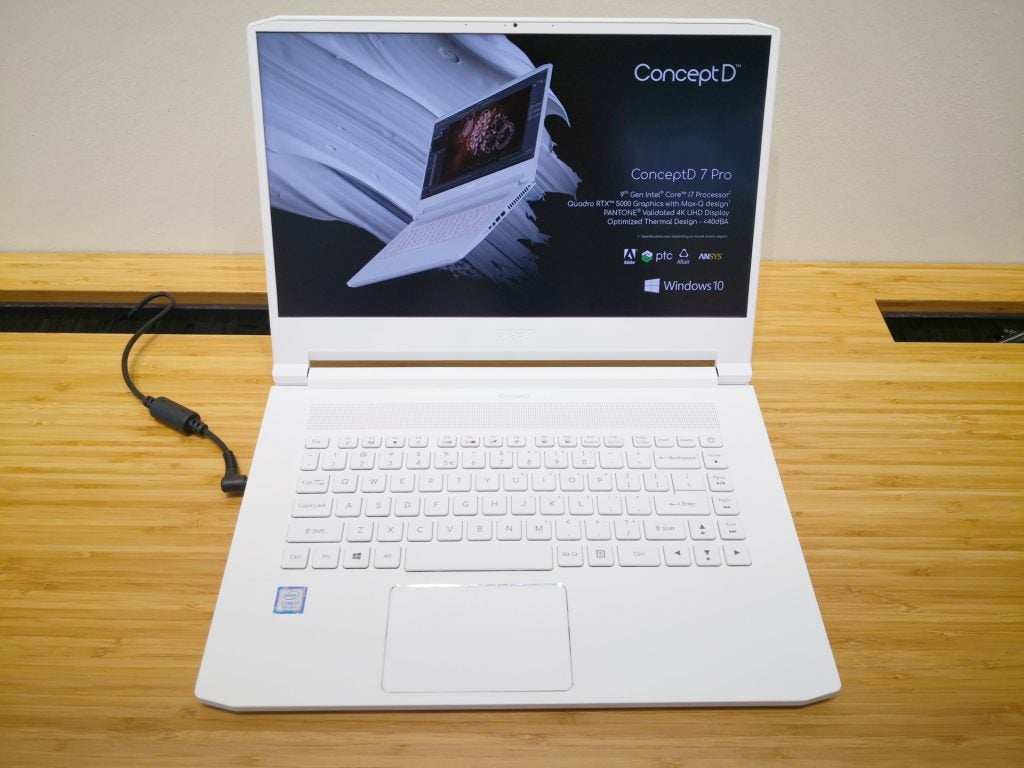 Much of what you can say about the ConceptD 9 Pro can be applied to the ConceptD 7, in that its a powerful laptop aimed at digital photographers and video editors, by virtue of its detailed and accurate display.

The 4K UHD display is Pantone rated, covers 100% of the Adobe RGB colour gamut, and boasts a low Delta E score, all of which means, in lay speak, that colours on the display will look pretty realistic. If you’re after a laptop primarily for photo work, the ConceptD 7 Pro might be for you.

Unlike the ConceptD 9 Pro, the ConceptD 7 Pro isn’t a hybrid device – the display doesn’t rotate, so it can’t be used like a tablet.

While we don’t yet know which processor will be running under the hood, the ConceptD 7 Pro will feature a 9th gen Intel Core i7 CPU, so in theory, performance will be not quite as good, though we expect it’ll still rip through photo work.

In terms of dedicated graphics, you get the same Nvidia Quadro RTX 5000 that the ConceptD 9 Pro has.

Acer has confirmed that the Acer ConceptD 7 Pro range will go on sale in November, and the range will start at €2599 (~£2352). No further details on the price range have been announced, and we do not currently have UK-specific release dates. 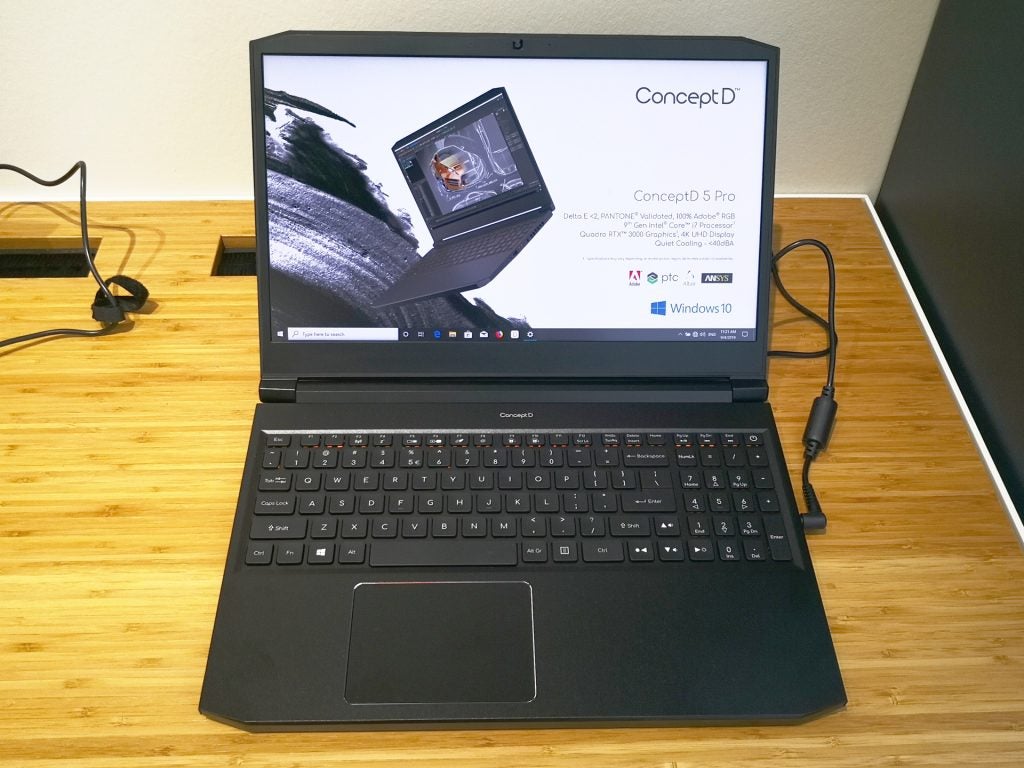 Not announced at Acer’s keynote but present at Acer’s stand at IFA nonetheless is the Acer ConceptD 5 Pro, featuring up to 9th Gen Intel Core i7 processors and up to Nvidia Quadro RTX 3000 graphics.

The model on display at Acer’s stand had an Intel Core i7-9750H processor and 32GB of RAM. We’re told that there will also be other processor variants – possibly with 10th gen Ice Lake or Comet Lake chips in the future? Acer’s keeping quiet on that front, for now.

The Acer ConceptD 5 Pro on show featured a 15.6-inch 4K UHD display – there will be a larger 17.3-inch version available. Both versions have been Pantone Verified, and promise to cover 100% of the Adobe RGB colour space, so, as with the ConceptD 9 Pro and ConceptD 7 Pro, anyone after a colour-accurate display should be well catered for.

Graphics-wise, you’ll get ‘up to’ Nvidia Quadro RTX 3000 here, although it’s not currently clear what your other GPU options are.

A full list of UK prices and release dates for the Acer ConceptD 5 Pro range is still TBC, but Acer says that they will go on sale in December for €2599 (~£2352). 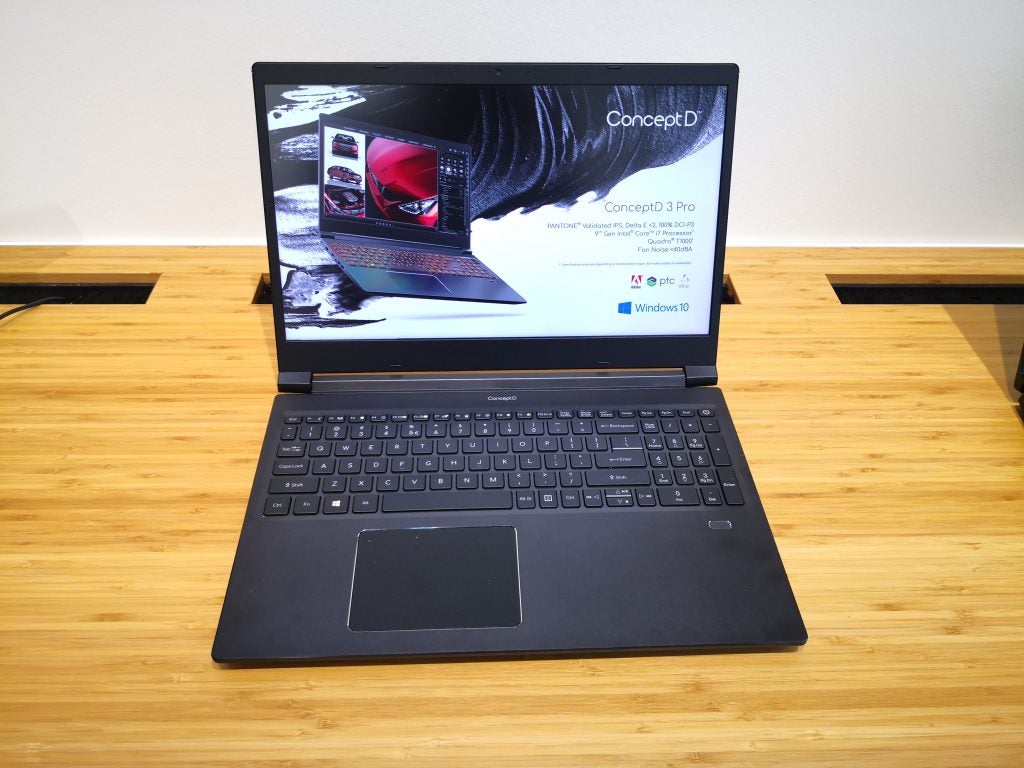 The Acer ConceptD 3 Pro is the least powerful of the ConceptD Pro range, but it’s aimed primarily at photographers, or anyone thinking of starting a YouTube channel and wanting something decent to edit and render video on.

Processor-wise, the ConceptD 3 Pro is as good as most of the others in the range, coming as it does with an Intel Core i7-9750H processor. This is paired with Nvidia Quadro T1000 graphics (786 cores, 4GB vRAM).

There’s also a built-in fingerprint scanner and support for Windows Hello, so keeping all your projects secure while working on the move will be easy.