If you’re looking for a quiet place, the best place on Earth is the anechoic chamber at Microsoft’s headquarters in Richmond, Washington. It’s a room padded to the extreme to insulate from outside noise, and to absorb echoes inside.

Volume is measured in decibels. The sound of a jet engine taking off from 25 metres away is said to be about 150dB. The average library has background noise at about 40dB. The threshold of human hearing is 0dB. According to the Guinness World Records, Microsoft’s anechoic chamber reaches -20.35dB.

I didn’t get to go to Washington, but for the release of A Quiet Place on home turf, I was invited to the anechoic chamber in the engineering building at University College London. The room was initially built as a studio for recording speech for language research. It’s also used for hearing experiments and equipment testing.

Today, however, it was used to unnerve a curious AV journalist. Acoustic isolation is an important factor when it comes to the enjoyment of a film. An anechoic chamber appeared to be the best home cinema environment, but as I was soon to discover, there is such a thing as too much silence. 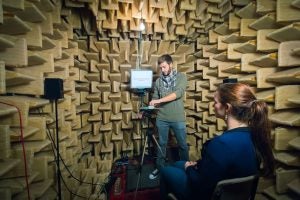 The plan: stay in there for 10 minutes of total silence, and then watch the opening scene of A Quiet Place.

The chamber is essentially a box within a box. The outer box is lined with acoustic absorbers. The inner box sits on shock absorbers and is also made of sound-absorbing materials. I had to climb up some steps to get in.

The walls of the inner box are lined with wedges made of glass fibre. The wedges are shaped so that any sound produced inside the chamber will reflect into other wedges until it’s absorbed entirely. An engineer warned me against walking into them – apparently glass fibre can get into your skin and irritate.

The floor was a mesh grille suspended over more glass fibre wedges. Walking around made noise, so I sat down on the chair provided. The door was closed behind me. 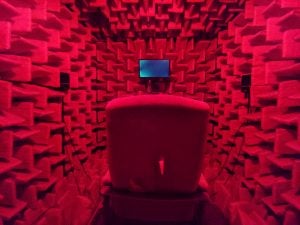 The effect was immediate. This chamber ‘only’ goes down to about -3dB, but that was enough to display what is meant by the term ‘deafening silence’. The first thing I noticed was a weird sensation in my ears, as though all the air had been sucked out of the room. In reality, this was just the disappearance of background noise.

Our ears are used to a degree of noise every day, and that puts pressure in them. With that gone, my ears felt depressurised. I imagine it’s a little like being in a vacuum. Indeed, NASA has used anechoic chambers to help astronauts prepare for the vacuum of space (I’m going to take this to mean I’ve had a mild form of astronaut training).

It’s remarkable how much noise we take for granted, or subconsciously tune out: the air conditioning in the office; the low rumble of the bus just down the road; the hum of fluorescent lighting. With all of that gone, I was acutely aware of how much noise the human body alone can make. 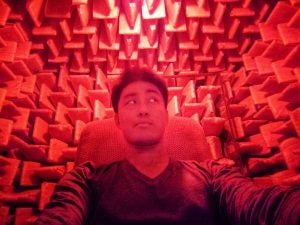 My breathing, barely audible, was suddenly the loudest thing in the room. Every time I moved, I could hear my shirt pulling across my shoulders. It was chosen for the softness of its cotton, but here it sounded like I was sanding a table. I consider myself fairly healthy, but the sound of my bones grinding and clicking made me suspect otherwise.

Eventually I noticed a very faint hum. Later on I was told that it was probably very mild tinnitus. It’s likely that it’s always been there, and I’d never heard it before because it’s been masked by other noises.

And then there was my heartbeat. Even in such a quiet place I could barely hear it. I felt it, though – a low drum pounding with more force than I’d ever noticed day to day. 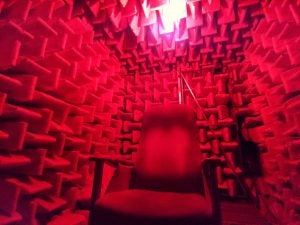 It’s a strange, unnatural sensation but I grew to like it. After the initial disorientation, I found myself oddly calm. That probably says more about me than anything else  – I find loud, crowded spaces tiring and stressful, and I rarely leave the home without a set of noise-cancelling headphones.

Not everyone will feel the same way, however. On exiting the chamber I spoke to John Drever, Professor of Acoustic Ecology and Sound Art at Goldsmiths, University of London. He tells me reactions are very subjective.

“Some people are very chilled out; others get hyper-vigilant and anxious. We evolved in the world of noises. That’s how the human auditory system developed. You plonk someone in a space like that and the auditory system searches for background noise. It’s not used to it, and it can be quite unnerving.”

There’s a myth that spending half an hour in an anechoic chamber can drive a person mad. While that isn’t true, I can understand the sentiment. Especially for claustrophobes. 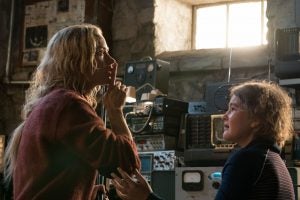 After my 10 minutes of silence, it was time for me to watch the opening chapter of A Quiet Place. The experience was… intense.

For those who haven’t seen it, A Quiet Place is a horror film set in a world where making noise can get you killed by monsters. There are plenty of totally silent scenes, which made the choice of venue very fitting.

As we’ve already established, the overwhelming silence of the chamber meant my breathing suddenly felt a lot more conspicuous. In certain scenes, as the characters held their breaths, I found myself doing the same. In a way, this is the very best place I could have come to watch this film.

It’s an intense movie to begin with, but I felt it was made all the more effective by the fact that I had no distractions to pull me out of suspended disbelief. The loudest thing in the room was me. I’d heard about the problems in the theatrical run of the movie, where the rustling of popcorn proved too distracting for customers. If you want to really get into a film, if you want to really benefit from the sound design, silence is key.

Not too much silence, mind. The extreme nature of the room’s sound absorption properties meant I heard a little too much from the little computer speakers that had been set up for me.

This level of clarity is usually reserved for product testers. I found myself hearing the flaws in the speakers, which an ordinary consumer in an ordinary environment isn’t supposed to hear. 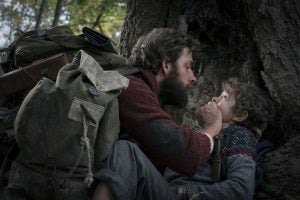 I went into that chamber wondering whether it would be the ideal home cinema environment. It isn’t. It’s overkill. But there are things to be learned, which could benefit your home movie viewing experience.

Firstly, soft furnishings soak up noise. Pillows, rugs, thick curtains, canvas paintings – all help to make the room more inert. They stop sounds from bouncing around too much, and also reduce the amount of noise coming in.

You might even consider proper acoustic treatment. I’m not saying you need a room full of glass fibre wedges, but acoustic foam panels are easy enough to buy and install. If you have blank, parallel walls either side of your viewing position, those panels are ideal. Soundproofing is a good thing in moderation.

Also, get some proper speakers. The more clearly you can hear your speakers, the more apparent their flaws. If you’re going down the route of acoustic foam panelling in your home, you might not want to use tiny PC speakers.

That might not be enough, though. Professor Drever reminded me of domestic realities.

“You always have domestic noises to deal with. Maybe you don’t want to wake up the rest of the family, but you want to enjoy the stereo soundscape. If you really want to focus on the sound and find that isolated space, put on some noise-cancelling headphones.” 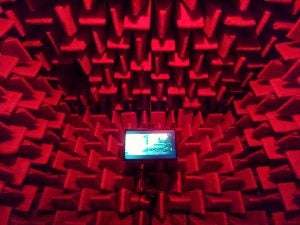 The professor has a point. I use large speakers and I have acoustic foam, yet I’m endlessly aware of unwanted noise. I live near two construction sites, and even if no-one is working, I can hear the traffic. And I have a house rabbit, who likes to wait until a movie’s crucial moments to start rattling her water bottle.

Noise-cancelling headphones do address a huge chunk of everyday noise pollution, both inside and outside of the home.

They excel at handling low, constant sounds such as the rumble of traffic and that fan you put on to deal with the heatwave. They can turn a roaring plane engine into a whisper. They’re less effective against transient, high-pitched sounds such as sirens, but it’s better than nothing.

They’re also affordable, and portable – and there’s none of the pressure-related weirdness you experience in a deadly silent chamber.

To paraphrase French philosopher, Jean-Paul Sartre: hell is other people’s racket. Anything that can save you from that can only be a good thing. Just don’t overdo it.

A Quiet Place is out now on digital download and arrives on 4K Ultra HD, Blu-ray and DVD August 13.