5G mobile connectivity is arguably the signature feature for the new iPhone 12 range, but some early adopters may have to wait a while to feel the full benefits of those next-gen data speeds.

According to a purported training document published on Reddit over the weekend (via MacRumors), 5G connectivity will not be available while the iPhone 12 is in Dual SIM mode.

In the document reportedly shared with retailers and carriers, Apple states data speeds will be throttled to 4G LTE while in Dual SIM mode – at least until an update arrives to remedy the situation.

The alleged document says: “When using two lines in Dual SIM mode, 5G data isn’t supported on either line and will fall back to 4G LTE. If customers are using eSIM only and are on a 5G-supported carrier and service plan, they’ll have 5G access.”

The person who posted the image below went on to claim Apple plans an iOS 14 update before the end of the year, which will resolve the niggle and enable 5G in Dual SIM mode.

If you’re wondering what Dual SIM mode is, it leverages tech used in the iPhone XS range an up. Within those devices there’s an internal eSIM as well as a traditional nano SIM card. This enables, among other things, an iPhone owner to run business and personal numbers on the same device, have a local data plan for travel abroad, or have separate voice and data plans. For now though, those folks will have to settle for 4G LTE connectivity. 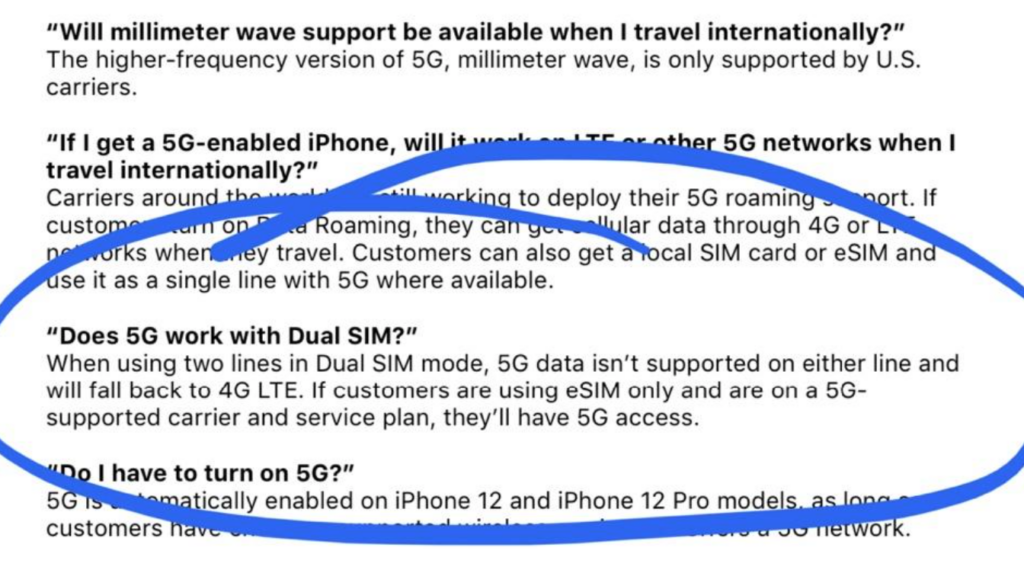 The iPhone 12 range is the first to ever offer a 5G modem. In the UK, they will support the sub-6GHz networks already in operation, while the US networks will support the faster mmWave infrastructure currently rolling out in major cities.

The effectiveness of the technology will be determined by the respective networks, rather than anything Apple can do right now, but for those looking to upgrade their iPhone to last the next few years, the range of options is seriously tempting.