Microsoft has released a new preview build for Windows 10, introducing a smorgasbord of welcome changes.

The Windows 10 Insider Preview Build 14328 is now available for both PC and Mobile to all Window Insiders in the ‘Fast ring’.

It follows shortly after the Mobile build that was released on Wednesday, which means Mobile users won’t notice much different.

But for PC, Microsoft has made a whole host of important changes, from which we’ve selected five of the most interesting.

It’s a new experience that will fully arrive with the Windows 10 Anniversary Update in summer, but it’s now available for the first time in preview. 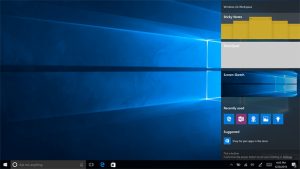 Windows Ink lets users write and doodle with ease using a stylus – like the Surface Pen – allowing you to create stick notes and draw on a whiteboard. It’s also integrated into several apps, including Maps, Microsoft Edge, and Office.

To access the Windows Ink Workspace, just hit the pen button in the notification area of your taskbar. This will only show up if you’ve got a compatible device like the Surface Pro 4 or the Surface Book.

Cortana on the Lock Screen

Cortana is now built into the Lock Screen of your device for the very first time, which means you can utilise her voice features without ever having to unlock your machine.

Microsoft says: “You can ask her questions like ‘Remind me to take out the trash when I get home’ or ‘When is the next Mariners game?’” 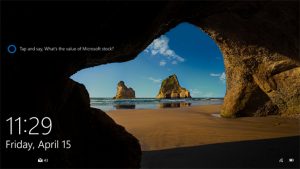 To enable Cortana on the Lock Screen, dive into Cortana’s settings and look under ‘Lock screen options’, where you’ll find a toggle for ‘Let me use Cortana even when my device is locked’. And don’t forget to turn on ‘Hey Cortana’ too.

Microsoft has made a number of upgrades to the taskbar in this latest build, most of which are designed to surface information more quickly and more intuitively.

The Taskbar clock is now integrated into your calendar, which means your calendar events are now just one click away. You can check your schedule through the clock, and you can even use it to navigate to the Calendar app. There’s also a ‘+’ button to add new events. 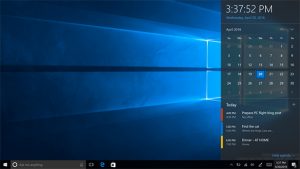 The Taskbar clock is now also visible on all monitors, which Microsoft says was an in-demand feature:

“We heard a lot of requests for this from our gaming community. We’re happy to announce that for the first time since the taskbar was created, if you have multiple monitors and your taskbar set to show on all displays, the clock will now be visible on each Taskbar.”

Other changes include Taskbar settings being moved to the Settings app, and a new feature that lets you manage multiple playback devices from the Taskbar thanks to an updated volume flyout.

This update will already be very familiar to Mac users: you can now switch between virtual desktops using the touchpad. To move between the desktops, just swipe four fingers left or right on the pad – a quick flick will do. You can also refer to two adjacent desktops by keeping your fingers down and dragging back and forth.

Of course, to use these new features, you’ll need a precision touchpad that supports four or more fingers. Fortunately, both the Surface Book and the Surface Pro 4 Type Cover both offer this.

The new Preview Build brings a couple of important updates to the Lock screen.

The first is that your e-mail address is now hidden on the Lock screen by default. If you want it shown, you can change this by going to Settings > Accounts > Sign-in options > Privacy. 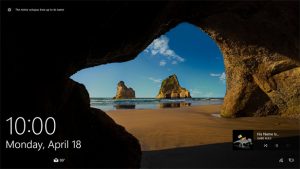 Microsoft says: “Your privacy is important to us and we received feedback that people did not want their email addresses display on the Lock screen.”

The second change adds media controls to the Lock screen, which are now embedded in the bottom right corner. You can play, pause, and skip or backtrack through songs, and a picture of the album art form your current track will also appear.

What’s your favourite new feature in the latest Microsoft Windows 10 Preview Build? Let us know in the comments.