Apple just got a big thumbs-up from the Eurasian European Council on a new product. At present, it’s mysteriously labelled the ‘A2289’ – but we’re betting that it’s a new 13-inch MacBook Pro with a jazzed-up magic keyboard.

9to5Mac has spotted a new filing from Apple on the EEC database recently. According to screengrabs shared by the site, the new gadget will be a “personal portable computer” powered by macOS Catalina. 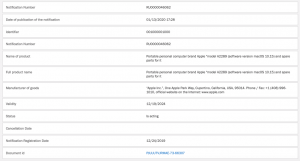 So far there aren’t any confirmations on size. However, as we were treated to a shiny new 16-inch Pro at the end of last year, it seems likely that we might get a scaled down version.

The 16-inch Pro offered an overall upgrade on previous MacBook iterations, with top-end specs and a price to match. One of the most noticeable changes on the machine was the new keyboard, which operated on scissor-switches.

This is a huge improvement on the previous Butterfly keyboard design, which many customers claimed was faulty. At the time, the Butterfly design caused so many problems that Apple eventually issued an apology to Mac owners.

Given the above, it seems likely that the new “personal portable computer” will come with the updated keyboard design, which is more reliable and popular to boot.

The screen size isn’t confirmed yet, but we’d anticipate a more compact offering than the flagship 16-inch design. That said, the 16-inch was a bump-up from the previous 15-inch design, so a new scaled-down MacBook could have a slightly larger screen than its predecessor too.

Read our review of the MacBook Pro 16-inch

There’s a solid pattern with EEC filings – usually, when a new approval appears on the site it’s swiftly followed by a product launch. So hopefully it won’t be long before the new device is revealed.