The launch of 5G later this year will be a bit of a damp squib, according to fresh research from IDC.

IDC forecast that despite a big marketing push by telecoms companies to get consumers and phone makers excited about the next-generation networking tech, just 0.5% of phone s shipped in 2019 will be 5G enabled, in its latest Worldwide Quarterly Mobile Phone Tracker report.

5G adoption will apparently be fairly slow over the next few years. The report suggested that even in 2023 only one out of every four smartphones will be 5G enabled.

5G is a next generation networking technology that will be rolled out in select cities, including London this year. It aims to offer radically faster gigabit-per-second data speeds that’ll let you do things like stream triple-A games over the network and download entire TV series in minutes.

Companies have been rushing to create smartphones compatible with the tech over the last few months. Samsung kicked off the trend at its Unpacked event, where it unveiled the Galaxy S10 5G alongside the regular Galaxy S10, affordable-ish Galaxy S10e, larger Galaxy S10 Plus and folding Galaxy Fold. 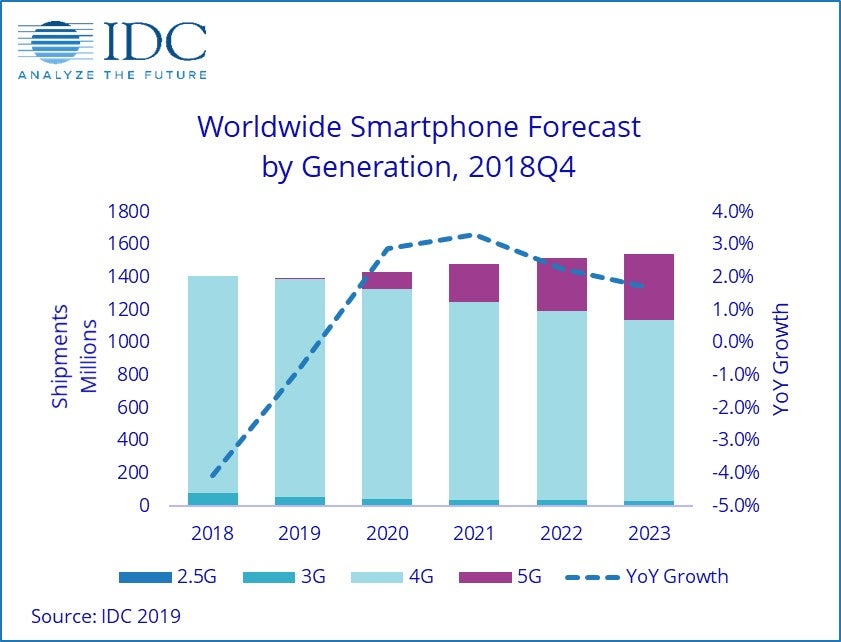 Big names including OnePlus with its mysterious OnePlus 5G prototype, Huawei with its Mate X folding phone and LG with its premium LG V50 jumped on the bandwagon at the Mobile World Congress in Barcelona at the end of February.

IDC isn’t the only firm forecasting slow 5G adoption. Experts from Motorola and CCS Insight told Trusted Reviews 2019 will be a year where companies focus on “educating” consumers what 5G is, not shifting smartphones at MWC.

“Though the 5G developments and foldable screen buzz is yet to have a reality check from users, 2019 will be surely marked as a year of modernization in the smartphone market.”

The figure is part of a general drop in mobile phone shipments. The report suggested that for the third consecutive quarter worldwide smartphone shipments will drop to 1.39 billion, marking a 0.8% decrease on the last quarter. The drop is believed to be due to people waiting longer before updating their phone.

Planning on picking up a 5G or folding phone this year? Let us know on Twitter @TrustedReviews