Steamed and frothy milks are an important part of many popular coffee drinks. But how can these be reproduced at home – particularly now that more of us are working from home, away from our favourite coffee shops? Here, we’ll help with a complete guide on how to steam and froth milk.

Below, we’ll take you through the various types of steamed milk, the ratio of coffee to milk for your favourite drinks, and the different ways of frothing.

The most well-known milk-based coffee drinks are a caffe latte and cappuccino. A classic cappuccino contains a third of espresso, a third of steamed milk and a third of milk froth (about 1-2cm thick, although it largely depends on the width and height of the cup you’re using). Depending on personal preference, a cappuccino can also be served “wetter” or “dryer”, with a greater amount of steamed milk in the former case and more froth in the latter. A traditional caffe latte consists of one third of espresso and two thirds of steamed milk, with a small amount of froth on top (roughly about 0.5-1cm).

A flat white is slightly confusing – but it’s essentially a latte poured into a cappuccino cup, with a very thin layer of froth on top. 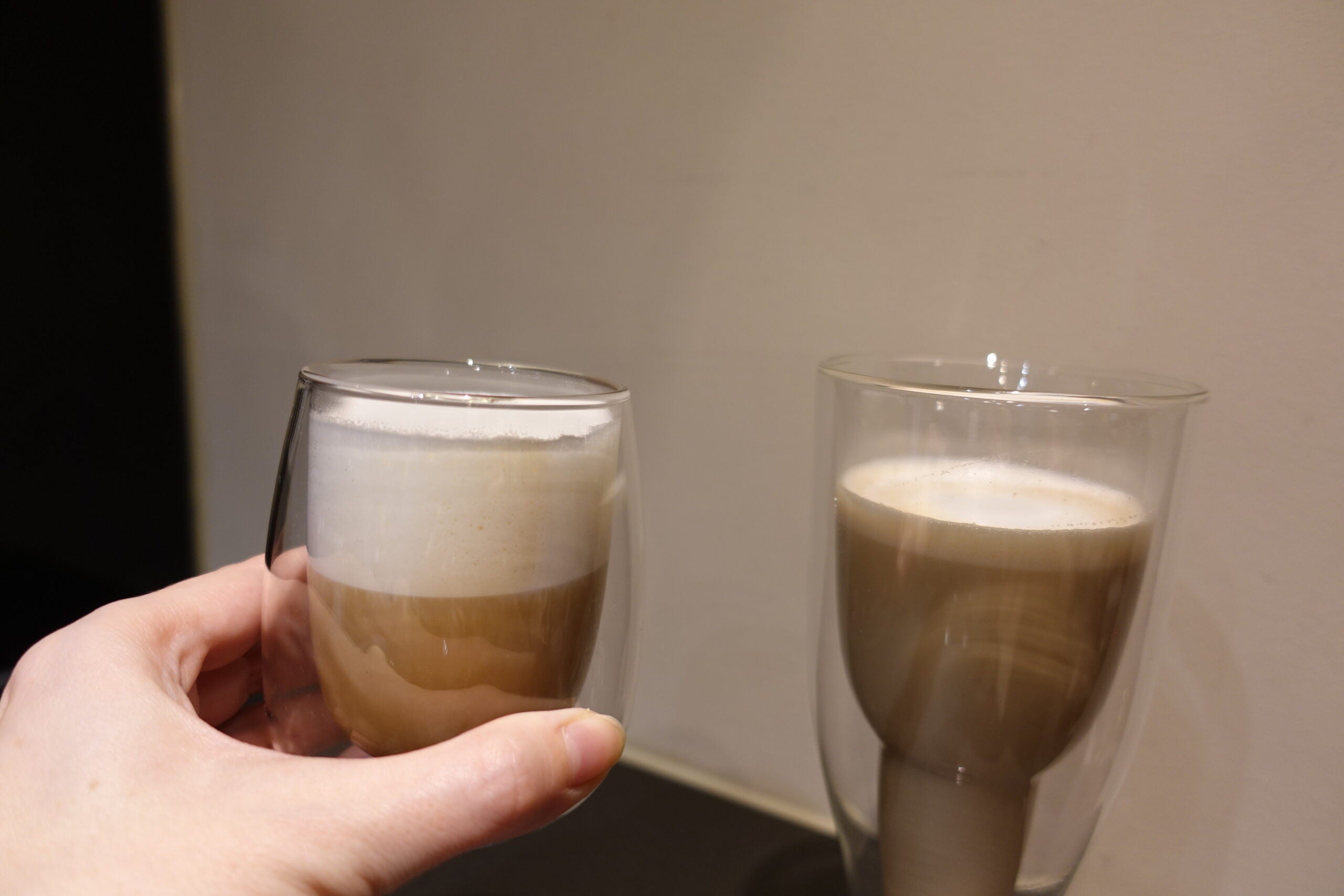 The typical cappuccino and caffe latte are both made by pouring espresso into a cup, followed by milk. A latte macchiato has the same ratios of coffee and milk as a caffe latte, but coffee is added after the milk. Since latte means “milk” and macchiato means “stained” in Italian, you’re literally staining your perfect white milk with coffee.

Most people are likely to prefer to play around with these traditional milk-to-coffee ratios. However, the most important bit is to be able to produce both steamed and frothed milk to achieve your desired coffee drinks at home.

Steamed milk is silky-smooth, made up of microfoam – microbubbles that appear when milk is exposed to steam or heated while swirled around. This texture is often described as “liquid paint” or “melted ice cream”. Frothed or macro-foamed milk has a dryer, less watery texture with bigger bubbles while looking very obviously “foamy”.

Most espresso machines and some bean-to-cup units come with a little metal wand for steaming and frothing your milk. The wand shoots out jets of steam that help whisk your milk. Using this wand to foam milk allows you to have the best control over the results. However, you’ll need a bit of practice, particularly since the steam will be quite hot, posing a risk of scalding yourself or overheating your milk.

To successfully create foam, you’ll need a heatproof receptacle. For best results, I’d recommend a barista-style metal jug, although you can have some success with a large mug. Another handy item is a temperature gauge. While you’re welcome to use any cooking thermometer, specialist barista units often come with the ideal milk temperature range highlighted, thus taking out any guesswork.

The temperature gauge and the material of the jug are both relevant because overheating the milk will impact its flavour. There’s a sweet spot for lactose-containing milk, which is between 60-65°C; once you go over 70°C, the flavour will be altered with the milk tasting burnt. A way to avoid overheating is to ensure both the milk and the jug are cold to start.

Be mindful of overfilling the jug. When making a cappuccino, the milk will roughly double, so make sure you have plenty of space for it expand. Meanwhile, milk for a caffe latte will grow by a third. The general guide with a barista jug is to fill up to the bottom of the spout.

Depending on your machine, you may need to start preheating the steam wand. When the machine is ready, give a quick burst of steam to flush out any water in the wand: you want to inject steam only. To steam properly, don’t turn on steam until the nozzle is submerged in milk towards the bottom of the jug, or you risk splashing. Keep the jug at a slight tilt (about 30 degrees), so the wand isn’t firing straight down. This helps the milk to swirl evenly. 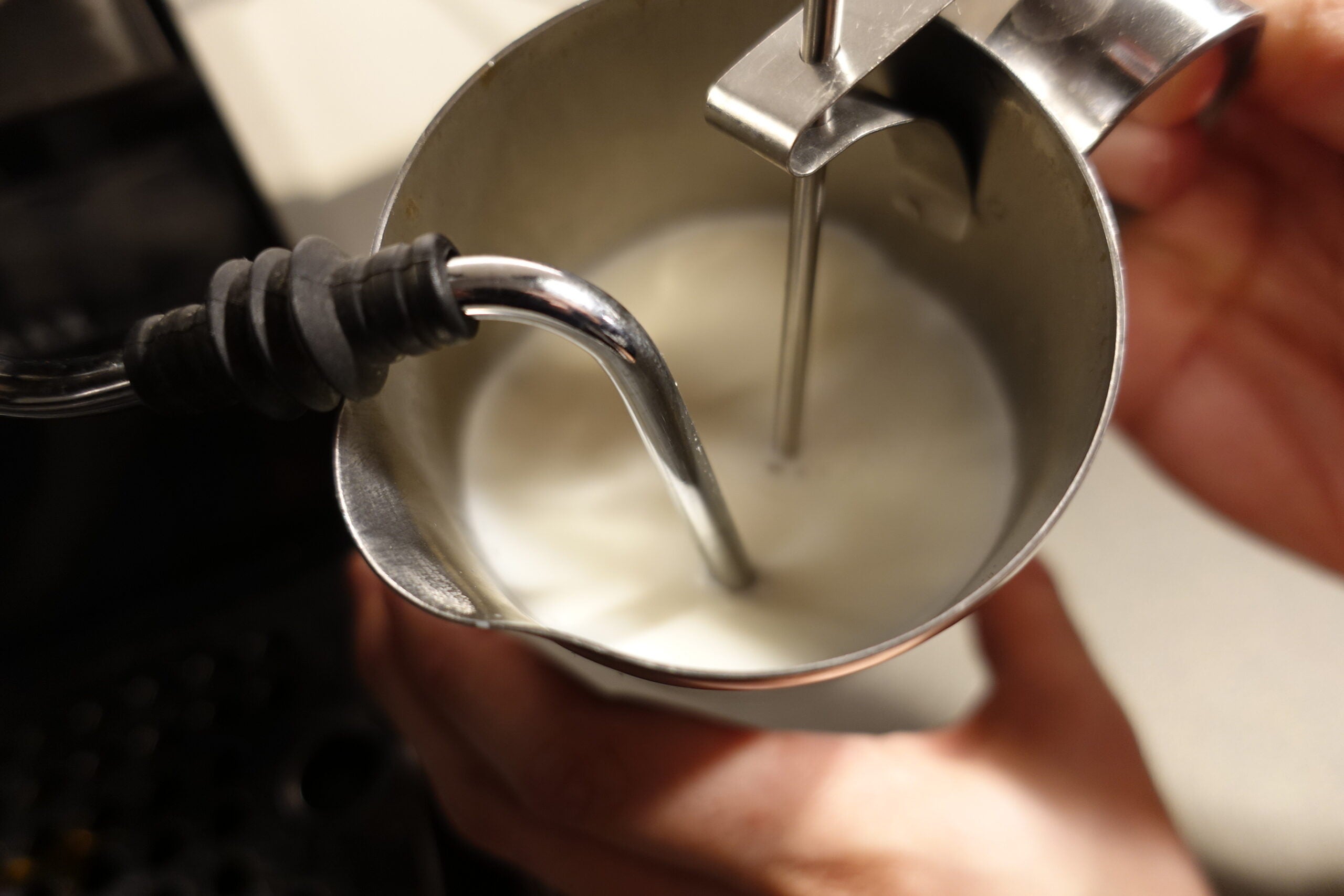 Push the wand down to the bottom of the jug and you create a vortex and heat; mix the milk until you reach the desired temperature. You need the right combination of both actions. 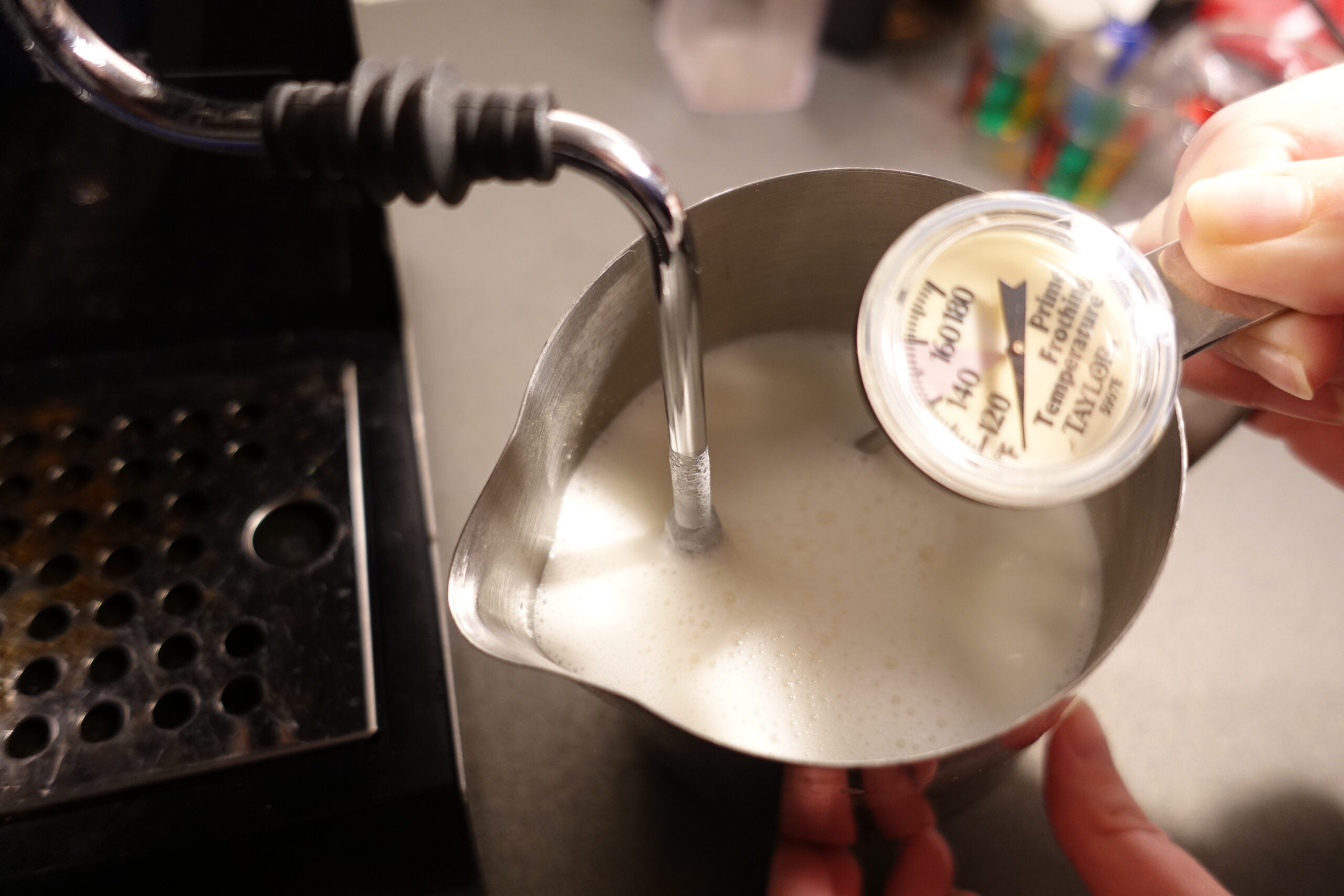 To prepare milk for a latte, I recommend holding the tip under the surface just enough so that you hear a hiss for a few seconds before raising it again, placing the wand at the bottom of the jug. This will introduce a little air to the milk but ensure it’s still mostly fluid. Stop steaming when your thermometer nears 60ºC, as the hot wand and the steam already in the jug will raise the temperature a little further.

For a cappuccino, keep the nozzle closer to the top (about 1cm from the surface). As the milk level will creep up, you’ll need to steadily lower the jug. A good tell is a mild hissing sound that you want to keep consistent – but don’t let the nozzle surface entirely, which can result in big bubbles and splashing. Once you have the desired level of foam, submerge the wand to the bottom of the jug and keep warming the milk until it nears 60ºC.

Before pouring, tap the jug against a firm surface (the kitchen counter will do) and swirl the milk around a few times to get rid of any bigger air bubbles – you’re after an even texture. Tip the milk forward with the lip of the jug close to the top of the cup in one swift motion. Hesitation is what separates milk from foam in the jug. Don’t worry about producing a nice effect at the moment: focus on getting the milk right first and pretty pictures second.

Milk frothers are smaller, available as handheld wands or jugs. The former are battery-operated mini-whisks, and while they can’t heat your milk, they can produce decent results if you know how to handle them – and they’re the most affordable foaming gadget. If you want hot milk, you’ll need to warm it in the microwave or a pot first.

Jug frothers both heat and foam your milk and will achieve more consistent results, since they usually come with a couple of predetermined settings. Some models simply offer you a choice between latte and cappuccino-style milk, while others have a few different temperature options, too. 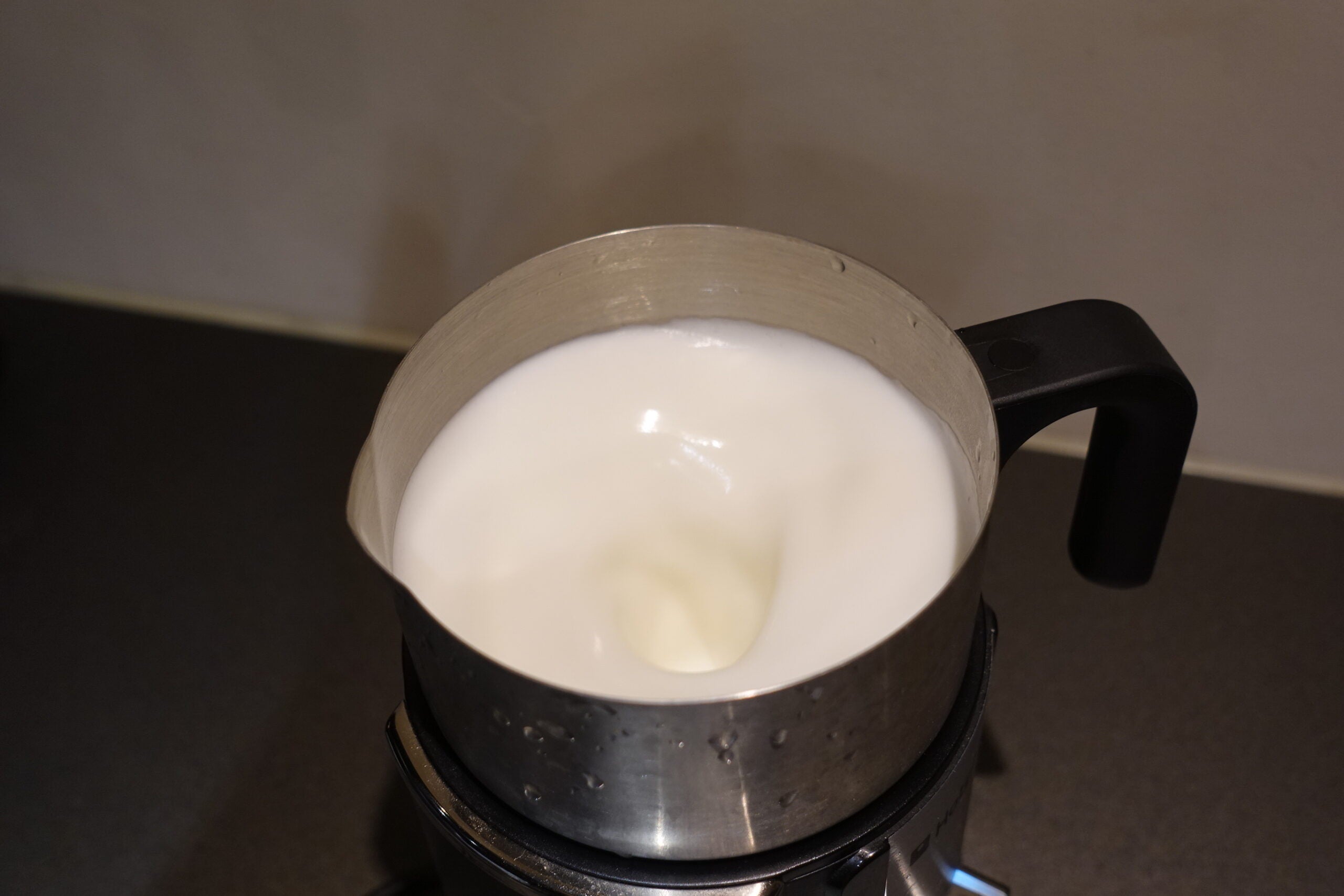 Products such as the Nespresso Barista can foam milk and make lots of other different styles of drink. They’re easy and quick to use – but, sometimes, they can be a little easy come, easy go. The foam created by a jug frother is likely to disappear/break down into bigger bubbles more quickly because the milk has simply been swirled around and whipped rather than penetrated and pressurised with steam. But if you drink your coffee quickly enough then this is unlikely to be an issue.

Convenience is the key selling point of jug frothers, as they’re effortless to use and cause the least amount of mess.

Jar in the microwave

The most budget option to create a foamy top for your coffee is to use a glass jar. First, find a jar that’s at least double the size of the amount of milk you’re looking to foam. Pour in the milk, close the lid and shake the contents for about a minute. Then, microwave it without the lid on for 30 seconds.

You’re unlikely to achieve the coveted microfoam texture with this technique. To avoid any injuries or damage to your appliance, you also need to be mindful of not leaving the jar in the microwave for too long.

However, if you have no other equipment and you’re after a bit of froth for your coffee, this method will do the job. You’ll need to use a spoon to scoop the froth from the jar as there will be a clear separation between milk and froth, which makes pouring difficult.

As opposed to the options outlined above, here you’re likely to get the best results with milk that has less fat content because it foams up more easily. 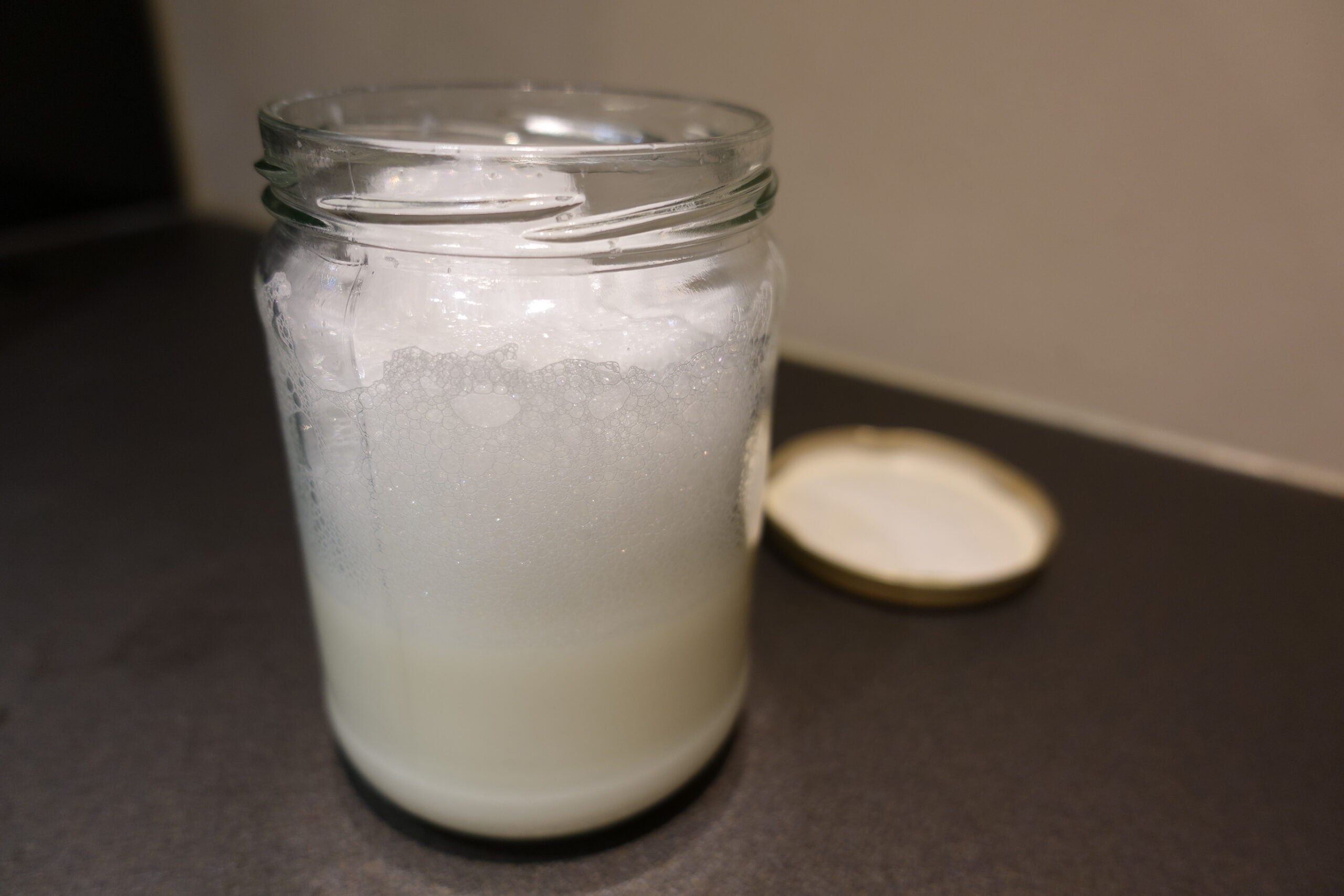 A note about milks

When it comes to foaming, full fat cow’s milk will always produce the most durable, thick and creamy result. While skimmed milk foams well, it becomes very dry in texture and can fall apart quickly, posing a particular challenge if you’re after the perfect microfoam texture for latte art.

In recent years, there’s been a surge in the availability of plant-based milks. The most important factor to look out for with these alternatives is fat content: you need a bit of fat to create microfoam or froth that’s likely to last. Many manufacturers have now released “barista”-style milks specifically aimed for foaming.