Could your smartphone be the only computer you need? That’s the dream pitched by a new Kickstarter campaign, but it’s not a new dream.

Motorola tried it back 2011 with its Webtop software and Lapdock hardware, but it died within 18 months. Microsoft struck on a similar idea with its Continuum feature for Windows 10 Mobile smartphones, but the Microsoft’s declining mobile fortunes don’t bode well for its future.

You can forget Apple trying something this radical, too, so it’s left to Android to pick up the slack. Enter Andronium OS and its Superbook.

Andromium OS promises to create a desktop environment for Android, allowing you to use all your smartphone apps on a big screen — similar to how Chrome OS is now beginning to support Android apps on its desktop platform.

Andromium OS was initially launched 18 months ago and rather than being an entirely new operating system necessitating you to root your Android smartphone, it is in fact just an app which you can download from the Google Play Store and install on any Android smartphone.

The goal is to get the software to work with as many Android smartphones as possible (though there are limitations) offering features like windowed apps, a Windows-like start menu and drag-and-drop icons on the desktop. 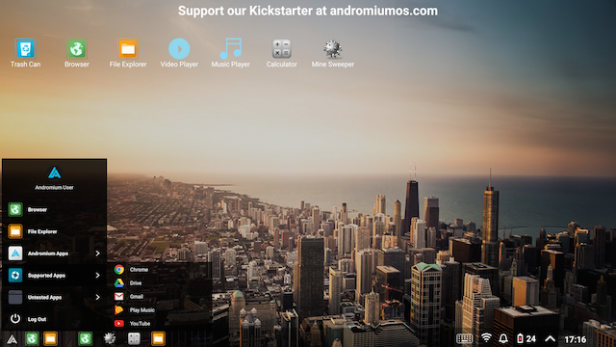 What is the Superbook?

When it originally launched in December 2014, the team behind Andromium OS started a Kickstarter campaign to fund the production of a dock which you could connect your smartphone to and then hook up a monitor, mouse and keyboard for a proper desktop experience. The campaign never met its funding goals and the official dock was never manufactured.

Now the team behind Andromium is back with another solution – the Superbook. Launched earlier this month, the campaign has already clocked up almost $1 million in funding from its initial goal of just $50,000. Clearly there is a market for what the Superbook is promising.

It features a 768p screen, keyboard, touchpad and promises a 10-hour battery life (up from the 8 hours the developers were initially promising, thanks to the extra funding the campaign has received).

Because this is Andromium, the Superbook works with smartphones from any manufacturer and the sales pitch says that if you upgrade your smartphone, then you are also effectively upgrading the performance of your laptop too, as it is powered by the chip inside your phone. The premise certainly makes sense in an era when smartphone chips are becoming so powerful and phones now ship with up to 6GB of RAM.

The Superbook is pegged to ship in early 2017 and costs just $99, but if you have a smartphone lying around and want to turn it into a desktop computer, then you don’t have to wait any longer. 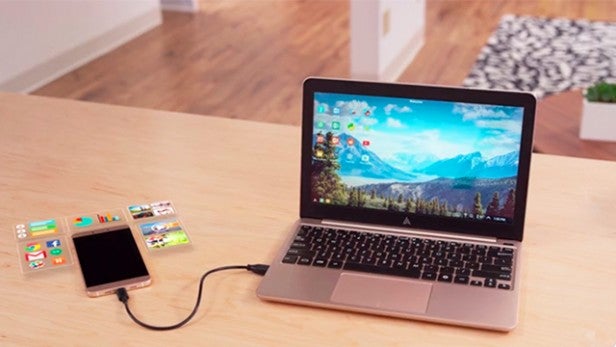 Turning an Android smartphone into a PC

Before you get started, you will need the following:

Additionally, if you are using a USB mouse or keyboard, you will need a smartphone that supports USB On-The-Go (OTG), a standard which allows mobile devices to talk to each other but also crucially lets you easily connect peripherals to your smartphone or tablet – which is vital if you don’t happen to have a Bluetooth mouse or keyboard handy.

If you are going down the wired peripheral route, you will also need a USB OTG adapter. You can buy microUSB versions for between £1 and £7 on Amazon, but if you are using a newer smartphone which has a USB C port, these cables will set you back a little bit more. 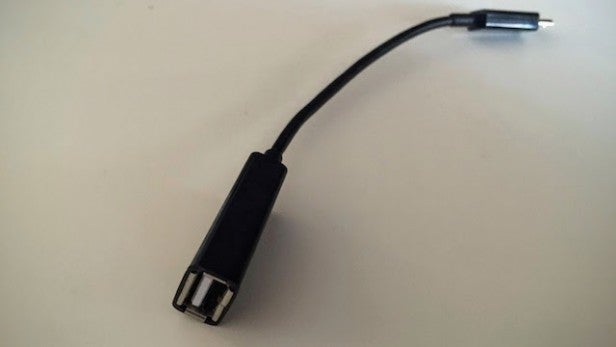 Which smartphones work with Andromium?

Before we get on to setting up our Andromium desktop system, a word on smartphones.

The software is designed to work on as many smartphones as possible, but the developers do give some recommended specifications for the smartphones that should be used. They suggest you should have a processor equal to, or better than, the Snapdragon 800 from Qualcomm, which was released in 2013 in smartphones like the Google Nexus 5 and Sony Xperia Z1. The company also says the phone you are using should have 2GB RAM as a minimum.

I tested multiple different smartphones released in the last 24 months and had no problem getting Andromium to work with them. It should also be noted that Andromium OS is not limited to running on chips from Qualcomm (I tested it with Huawei’s Kirin chipsets too).

Finally, if you are planning to use a wired keyboard or mouse, you should check if your smartphone supports USB OTG. While almost all smartphones released in the last couple of years do, there are exceptions. During my testing I found the Honor 5X, which was released in November last year, doesn’t support the standard.

First of all you need to download the Andromium OS app from the Play Store. Once installed you will need to grant it permission to access app usage data (in order to manage running apps in the task bar) as well as granting access to notifications, again so you can manage these directly from the desktop.

Next you will need to set up your screen and peripherals. Andromium suggests using a display with a minimum resolution of 1080p and you can use either a dedicated computer monitor or hook it up to your television.

While you can hook everything up with wires, if possible wireless is the way to go here. To wirelessly connect your phone to your display, you can use a Chromecast or Miracast-enabled set-top box or dongle which connects to an HDMI port on the screen.

If using a Chromecast, open the Chromecast app on your phone, tap the menu button and hit “Cast Screen”. You should now see your Android smartphone screen mirrored on your display.

If you are using a Miracast dongle, head to the Display option in the Settings menu, and scroll down to Cast. Here you should see your Miracast device listed, though you may first have to tap the menu in the top right hand corner to enable wireless display.

Next up you will need to connect a mouse and keyboard. Again connecting Bluetooth-enabled wireless devices makes everything a lot easier. Simply follow the normal pairing setup for these devices and you should be good to go.

If you don’t have one or the other however, you can connect a USB mouse or keyboard to your smartphone or tablet using a USB OTG cable (though there are also mice and keyboards available with microUSB connections making the cable redundant). Unless you are using an OTG hub, you will only be able to connect one of these peripherals at any time and it also mean your won’t be able to charge your smartphone at the same time.

On that point, Andromium says you need to have your smartphone charging in order for the operating system to work, but this was not the case in our experience. 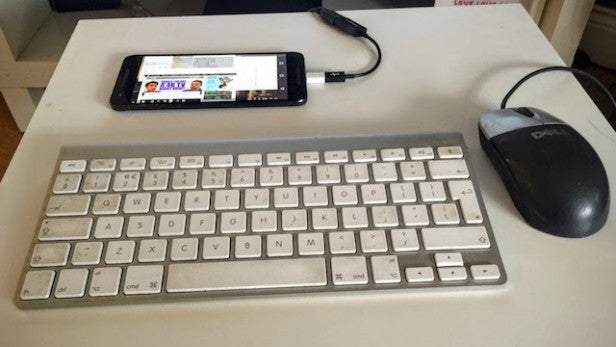 Of course, if your don’t need a really big screen and you have an Android tablet available, the set up is even easier. Simply download the app to the tablet, connect a Bluetooth keyboard (preferably one with a built-in trackpad — such as the one on the Asus Transformer Pad TF103), and away you go.

Once you have everything set up, you are ready to power up the Andromium OS app. When you launch it, you are asked to choose a UI scaling setting. It is typically set at Normal but I found that Large was a better bet on a 32-inch screen, but having the option to suit your setup is a nice feature.

You are also given the option of dimming your smartphone screen when you launch the app, again a handy option to help save battery life.

If you are not charging your smartphone, pressing OK doesn’t automatically launch the app. You will need to pull down the notification shade and tap the Andromium notification to launch it manually.

Once you do, your smartphone screen will go dim and on your display you will see a typical desktop environment with app icons, a start menu and task bar. Don’t for a minute think that Andromium is any way comparable to a fully fledged operating system like Windows 10, macOS or even Chrome OS, but it is a working desktop environment.

Andromium has its own range of native apps which open in windows that can be dragged, dropped and resized. These include a file explorer, browser, music and video players, a calculator and even a minesweeper clone to give it that authentic desktop feel.

These are all really rudimentary apps and none of them would replace much better apps available in the store.

Clicking on the Andromium logo in the bottom left hand corner opens up a start menu, where you can access a list of supported apps – they include Gmail, Google Drive, YouTube and Netflix – as well as every other app installed on your phone, which are listed as “untested”.

Open any of the supported or untested apps and these will open full screen with no option to resize them. They are simply blown up versions of what you would see on your smartphone, but in landscape orientation.

You can easily drag and drop the icons for these apps from the start menu onto the desktop to make them easier to access, though you can’t group them into folders. There is also no way to change the background image, which is set to an image of what looks like the New York skyline together with a banner at the top asking you to support the new Kickstarter campaign. 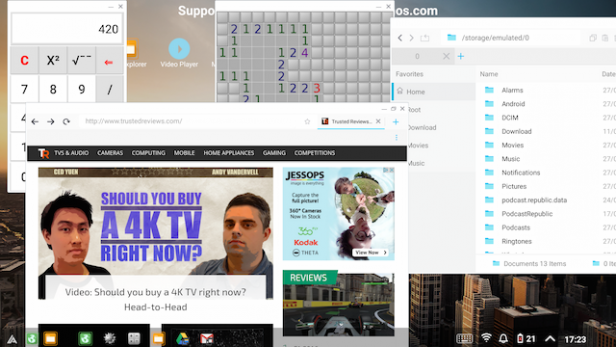 Is is any good?

On the positive side this offers a simple, relatively cheap and straight-forward way of turning an old smartphone into something useful. It is not a replacement for a fully-fledged PC, but if you need something for word processing, browsing the web and answering emails, then Andromium is certainly a cheaper option than buying a new PC provided you have requisite bits knocking around your home.

Navigating the interface with a mouse and keyboard feels very normal and while the software is glitchy, performance on any of the smartphones we tested was never a big issue.

On the negative side, the interface is still very buggy and limited in what it allows you to do. Admittedly the app is still in beta and you would hope that by the time the Superbook launches in 2017, the developers will have polished it significantly and added new features.

A lack of a settings menu; the inability to open non-Andromium apps in windows; and the need for better keyboard shortcuts to help you navigate the interface will all help improve this operating system immensely.

If Andromium can get the Superbook to work as flawlessly as it does in the promotional video, however, then for $99 it seems like an absolute bargain especially for people who work on the move.

What do you think of Andromium and the Superbook? Let us know in the comments below.