The number of outdoor security cameras available continues to grow. After all, they’re a great option for keeping an eye on your home. Rather than opting for an indoor camera that may simply record you as you go about your business, with an outdoor camera you’re capturing footage in the areas that you’re in less often. In addition, anyone who wants to break into your home comes from the outside, so it’s better to capture them there. However, while an outdoor camera might be better for your own privacy, what about the privacy of others? Are you allowed to share footage of shared spaces, or a public footpath or street? And what about the privacy of neighbours?

The good news is that things have become easier for anyone wanting to set up an outdoor camera. It used to be that you had to register your camera with the Information Commissioner’s Office (ICO), paying an annual fee to go on a database. Thanks to changes in personal data protection law, you no longer have to register.

This doesn’t mean free-reign to capture what you want, however. You still have to take account of people’s privacy to stay on the right side of current data protection laws. The government’s guidance on the use of CCTV systems carries basic information, but doesn’t go into great depth. Here, we cover everything that  you need to know. Note that internal security cameras aren’t subject to the same regulations, since they record on private property only.

1. Justify the need for a security camera

If you’re going to use a security camera, you should justify the use of it, rather than just adding blanket coverage of your home. Make sure you have a reason for installing the camera, which could be as simple as monitoring your front door or front windows, keeping an eye on a shed, or watching a back garden for signs of intrusion.

The government urges people to think about alternative protection, such as additional lighting or an improved alarm system. To our mind, there’s no reason you can’t combine all levels of protection: with the Ring Floodlight Cam, you can have a security light and capture people coming up to your door.

You need to think carefully about the placement of your security camera. In particular, you should minimise the amount of a neighbour’s property being recorded. How you do this will depend on the type of camera you opt for. At the very minimum, use your camera’s mount to carefully position the unit so it’s focused on your property. When installing, don’t place a camera too high so that it can see over fences into a neighbour’s garden.

Some cameras let you adjust the field of view, using a digital zoom to effectively crop out the sides of the image. Some newer cameras, such as the Ring Door View Cam, let you blank out parts of the image, adding privacy for neighbours.

Inevitably, some overlap is likely to happen, particularly if you live in a built-up area. Nevertheless, it is possible to minimise how much of other people’s property you record. If you don’t consider such issues, then a neighbour could make a complaint and you may have to take down your camera. 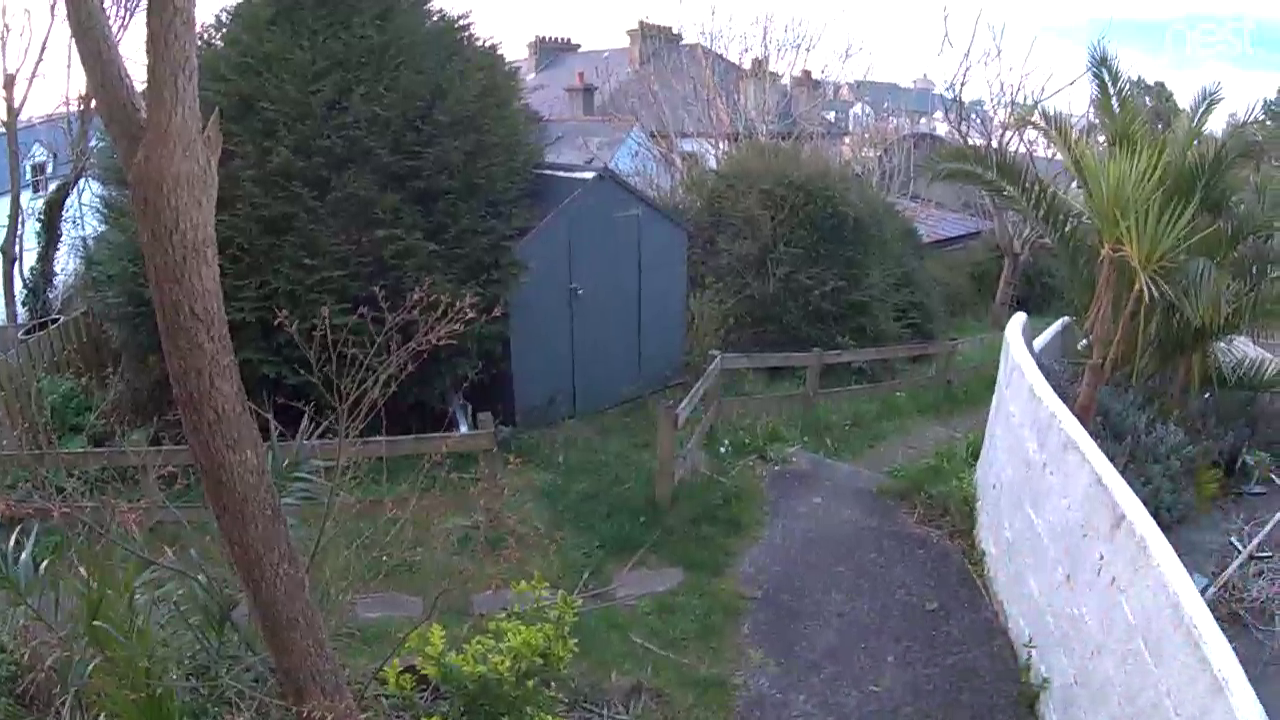 Place your camera carefully so that it’s recording as much of your private property as possible, but doesn’t infringe on a neighbour’s space

3. You need to be more careful if you record footage outside of your property

If your camera is purely set up to record footage of your property, you’re on easy ground. Everything you record is within your control and there’s no conceptual difference between this and using a security camera inside your home.

If you capture anything outside of your home, including a neighbour’s property or the public road, the rules change. Under the terminology, recording outside of your property boundary means that you’re now a data controller and have to abide by the rules of the General Data Protection Regulation (GDPR) and Data Protection Act (DPA). This is good enough reason to see if you can adjust your camera to record only your property.

If you can’t, then you need to take your installation more seriously. You should keep a record of the reasons you have a security camera system and the intended use, as the ICO can request this from you.

You also have to let people know that you’re recording. That can include a conversation with neighbours, or actually showing them the live feed from your camera to demonstrate that they’re not being recorded. You also need to put up signs telling people that CCTV is in operation.

In addition, recordings should be stored securely for only a limited period of time. While there isn’t a set period, you shouldn’t need more than a month’s worth of footage. If you’re using a cloud-recording service, you’ll more easily be able to comply with these rules: the information is secure by nature and is deleted automatically once a time limit is hit – say, after 30 days.

You should also limit the amount of data you record. This can include using schedules to turn your camera off when you don’t need it, or using geofencing to only record when you’re away from your home. Use a camera’s motion activity zones – if it has the option – to further reduce the alerts and amount of data you record. Note that a camera system such as Nest records continuously, so the only way to limit recording is to turn off the camera.

Think carefully about recording audio, too. If you don’t need it, then turn off audio recording, as you’re less likely to capture a private conversation this way.

4. Can people ask you for footage?

If your camera is recording outside of the boundary of your house, then people can make a subject access request asking for the images stored. You then have one month to provide the data that’s been requested.

People can also request that you delete information you hold on them, which has to be processed within one month. For a cloud system, this will likely happen automatically as you reach your cut-off point and the footage is deleted accordingly. Be more careful if you’ve downloaded data to keep, since this falls under the same laws.

You can refuse to delete footage if it serves a purpose, such as proof of a crime. However, someone can challenge that decision in court.

CCTV footage should be captured for a specific reason, which is usually to prevent crime by monitoring a set area. As such, you have to be careful if you share footage of people in a way that makes them publicly available.

The guidance on this is quite clear, with the government specifically stating that sharing footage on social media sites isn’t appropriate. In addition, the ICO says that publicly streaming or uploading footage wouldn’t be justifiable in most cases. The ICO will take a slightly more heavy-handed approach to it, but a more pragmatic approach may be in order.

For example, sharing a video of someone that has annoyed you, say by parking badly, isn’t really a good use of your security camera footage, nor is a video just showing someone walking past your home. However, if you’ve got footage of people trying to break into your home or car, and you have a shared social media hub with neighbours, letting people know what’s going on could be helpful and prevent further crime. Just be mindful of what you do share and make sure that you’re doing it for the right reasons to stay on the right side of the law.

It’s worth noting that the police has a right to request any footage that your camera may have captured for evidence. In the event of a crime, talk to the police about how the footage should be presented so that it can be used as evidence.

You also need to check a camera’s position regularly, to ensure that it hasn’t moved and is now recording something that it shouldn’t.

7. What happens if you break the law?

If you operate a security camera outside of the law, you can be subject to enforcement action from the ICO, which could include a fine. In addition, individuals can take you to court and sue for compensation if you’re unfairly recording them or their property. The ICO recommends inviting neighbours to view the security camera footage, so that you can allay any fears and head-off disputes before they hit the legal stage.

CCTV is a good tool to protect your property, but as all security cameras capture private information, it’s important to use any system responsibly.