While the classic recommendation is using whole fat milk when steaming and frothing milk for your caffe lattes and cappuccinos, not everyone can or wants to consume dairy milk. In recent times, many alternative plant-based milks have appeared on the market.

In addition to the more common soya and almond milk, the recent offerings include oat, cashew, pea protein and coconut milk. (The latter shouldn’t be confused with the stuff that comes in a tin and is mostly used for curries and desserts. Coconut milk in a carton that you’ll find in the alternative milks section of any well-stocked supermarket has a much lower fat content.)

One of the first things to consider is, of course, taste. To me personally, oat, almond and coconut milks taste very much like the produce they’re made of, inevitably lending their base flavour to your coffee drink. So, it’s worth considering whether you like these flavours, or whether you prefer something that would be more neutral. Out of the most widely available milks, I’ve found soya, pea protein and cashew milks to have the least impactful flavours. But the taste is always personal.

Next, it’s worth considering the qualities of particular milks, including how the milk will react with coffee, how well it will foam up and whether the foam will “keep”. It’s also important to bear in mind that flavour and foaming qualities can vary between manufacturers, although there are a couple of tells when you look at the contents on the back of the carton.

Some manufacturers, such as Alpro, combine different types of milk to produce their drinks (such as rice in coconut milk, or pea protein in oat milk), while purists, such as Plenish, pride themselves on just using water, salt and the relevant soya, oats or nuts. An increasing number of alternative milk producers have released “barista” versions of their drinks, meaning these are particularly suitable for foaming and serving with coffee.

As I’ll explain below, for some plant-based milks, the “barista” label is definitely necessary. The two major factors to look out for are fat and protein content, and stabilisers.

Fat and proteins are your friends when it comes to foaming plant-based milks: these are the nutrients that help create the traditional microfoam and froth textures in dairy drinks. If you want a nice creamy texture, you need a milk with higher fat content – whether it comes from added oils, or is natural to whichever nut the milk is made of. For example, sunflower and rapeseed oils are popular additions to oat and pea protein milks.

Stabilisers are additives that give the milks a smooth and thick texture, strengthening their structure so they can build up the froth. A milk containing stabilisers is also less likely to separate or split when coming into contact with a substance that has a different temperature and/or acidity levels – such as freshly brewed espresso. You can find these in coconut and almond milk, for instance.

The most widely used alternative, soya milk, is also one of the best. Steamed soya milk comes closest to the ideal microfoam texture, often described as wet paint or melted ice cream. The surface of the drink is glossy and the froth maintains its consistency while having a superior silky-smooth mouthfeel. The froth also manages to stay firm enough that you can spoon a hole in it 10 minutes after foaming, keeping its shape even when bubbles start breaking up.

One important note about soya milk is to keep the temperature under 60°C, which is even lower than the maximum of 65-70°C for dairy milk. I found it perfect when I stopped steaming at around 55°C, with the temperature creeping up a few more degrees as the process was winding down. A good way to not overheat your milk and still achieve the necessary volume is to start with a cold jug and fridge-cold milk (even if your alternative milk doesn’t need to be kept refrigerated). 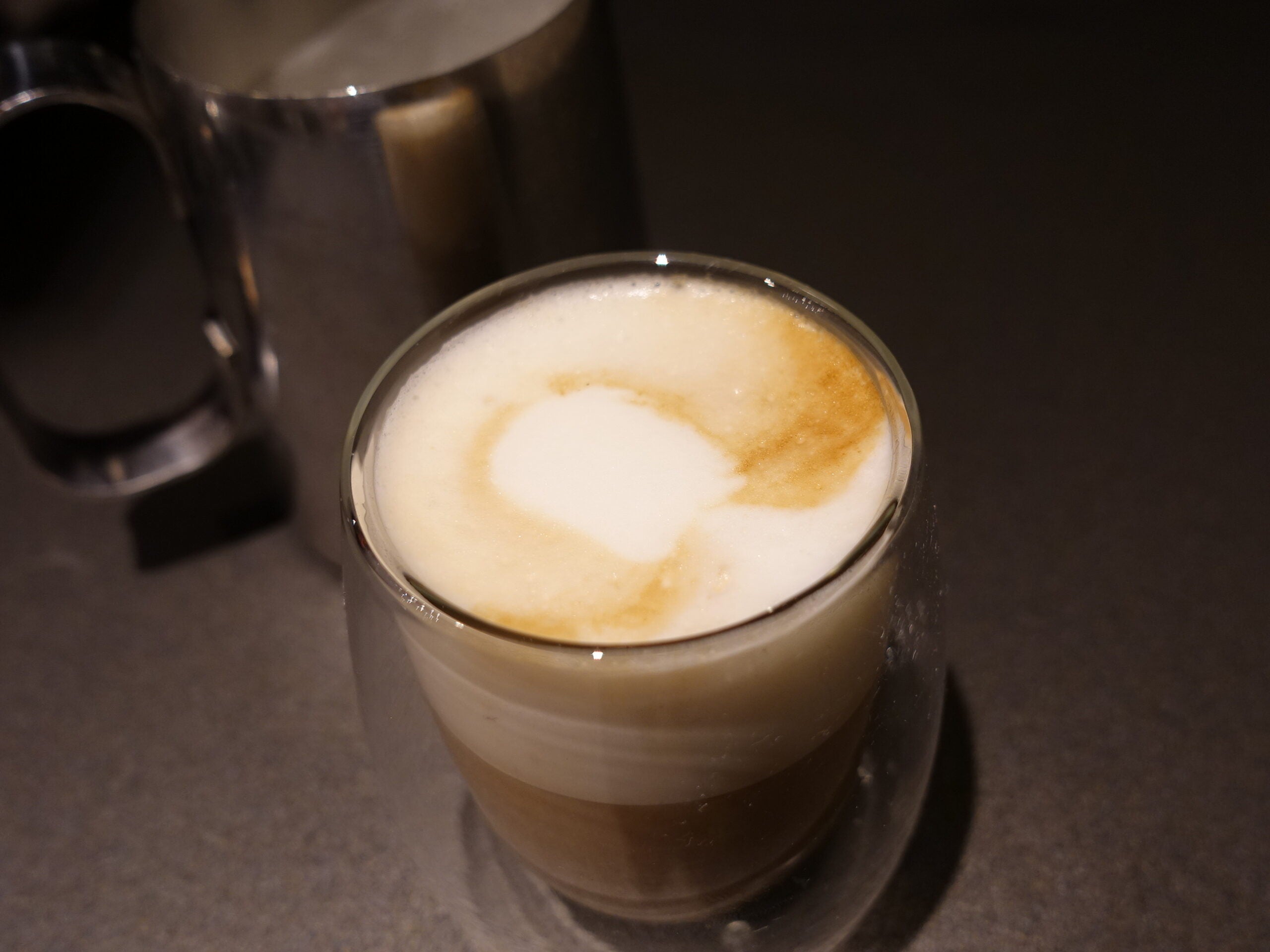 As oat milk isn’t naturally fatty, it tends to behave like skimmed cow’s milk. That is, it fluffs up quickly but also gets too bubbly very easily. However, many barista versions of oat milk are now available and these tend to fare much better. If unsure, look out for oat milks with fat content, such as added sunflower oil.

Still, it’s worth bearing in mind that even barista-style oat milk is likely to form big bubbles. When aerating milk with a steam wand, you can get a nice thick layer of froth if you take your time and do it carefully. But after standing around for about minute, the milk and froth separate and the froth takes on a bubble-bath like texture. This means it’s difficult to create and maintain any microfoam – bad news if you’re keen on some latte art.

Almond milk is fussier than some other alternative milks, but this doesn’t mean you can’t get good results. Opting for a barista-style almond milk or making sure it contains stabilisers is useful here, as pure almond milk is likely to split when poured onto coffee. While splitting doesn’t necessarily impact the flavour, it will not look attractive if you’re serving your drinks in transparent receptacles. 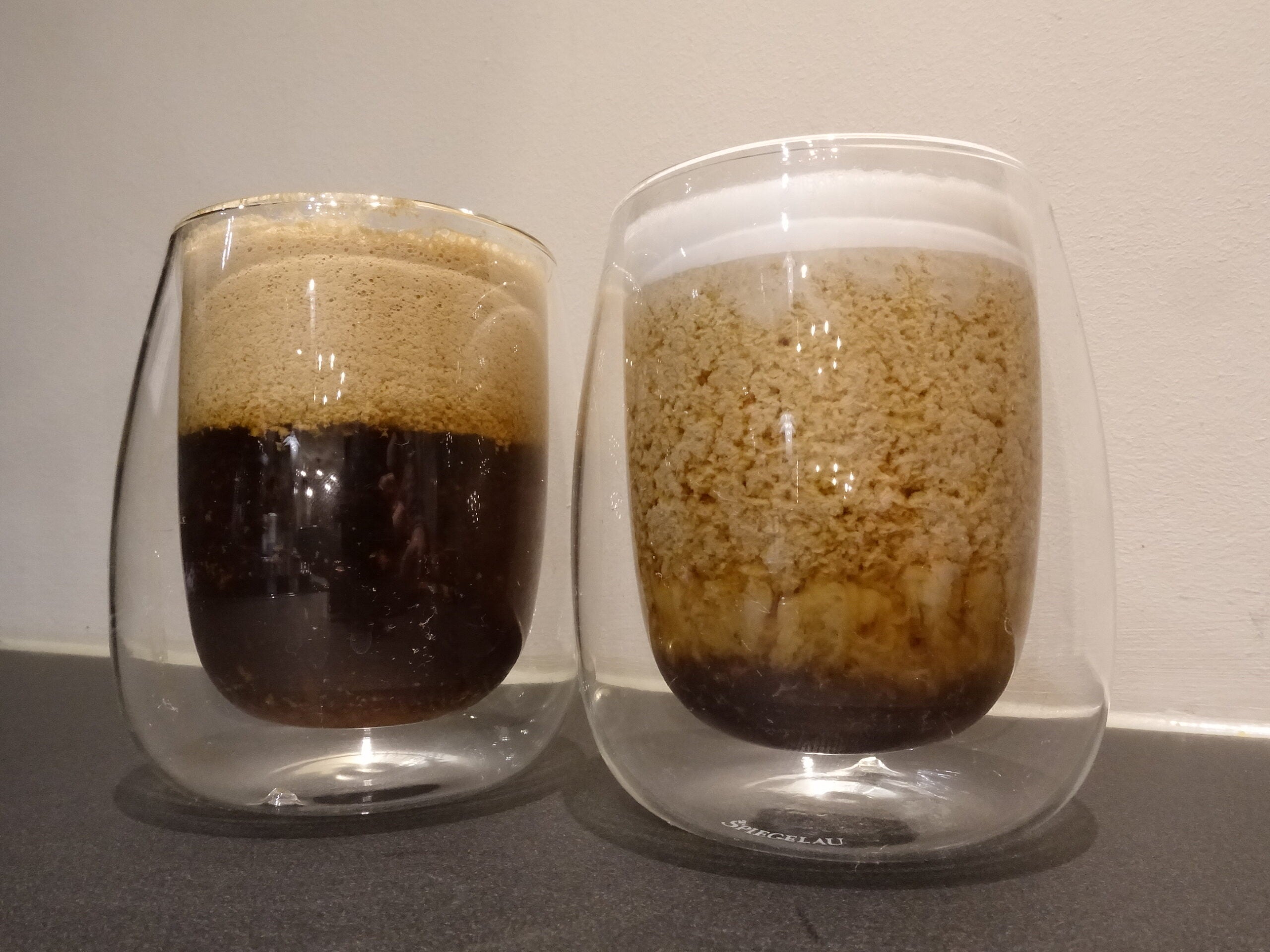 It’s best to go slow when foaming almond milk and stop at around 55°C, to avoid excessive bubbles and a subsequent “cratered” surface. 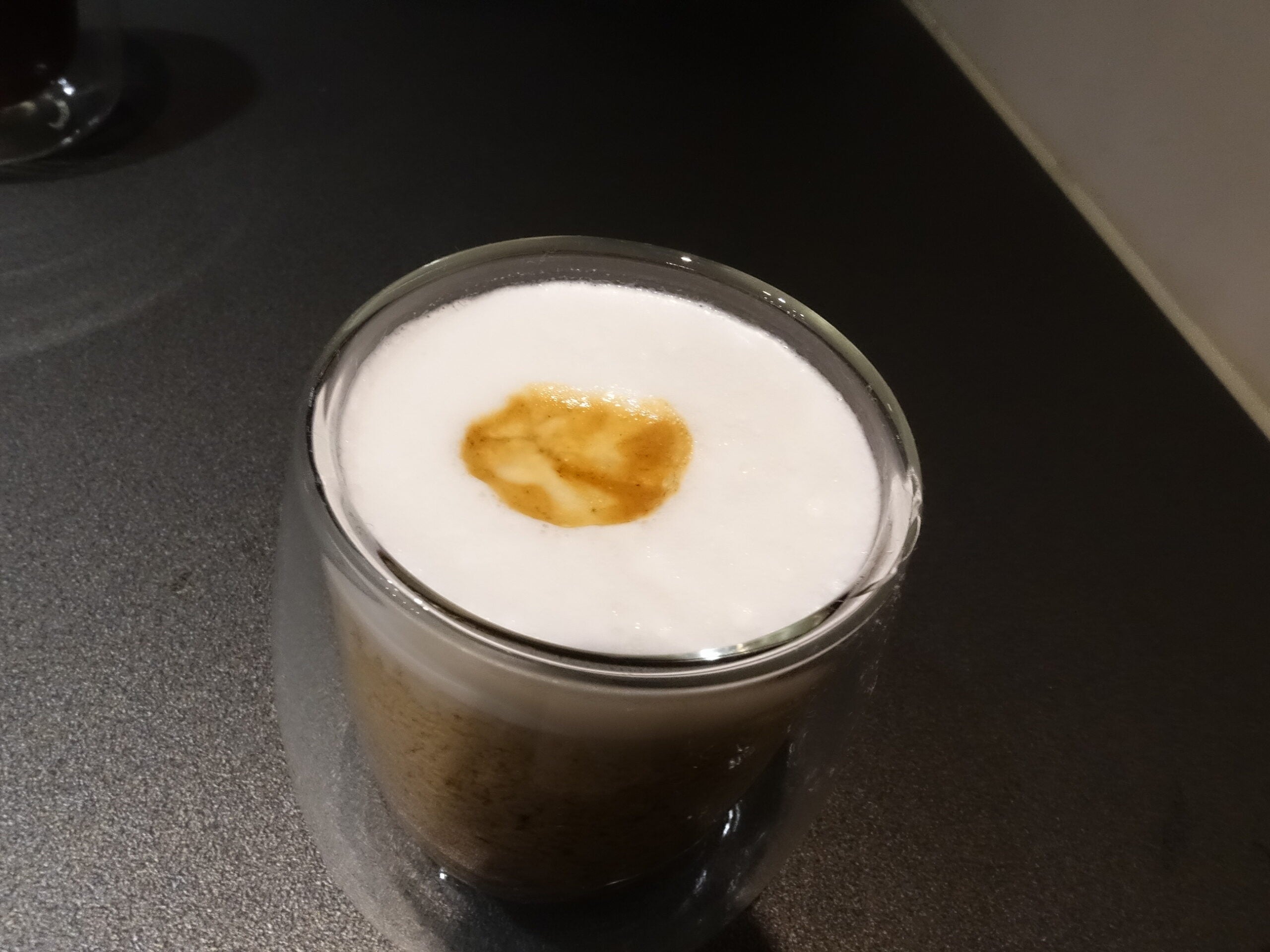 Pea protein milk tends to achieve the fluffiest texture of all alternative milks. While the barista version particularly excels here, a regular version (which still contains rapeseed oil, just as its professional counterpart) does well too.

However, pea protein milk doesn’t hold up as well over time as soya milk does. After about two minutes, the former starts losing its evenness. Bigger bubbles can be spotted on its surface, which eventually obtains a bubble-bath like texture. 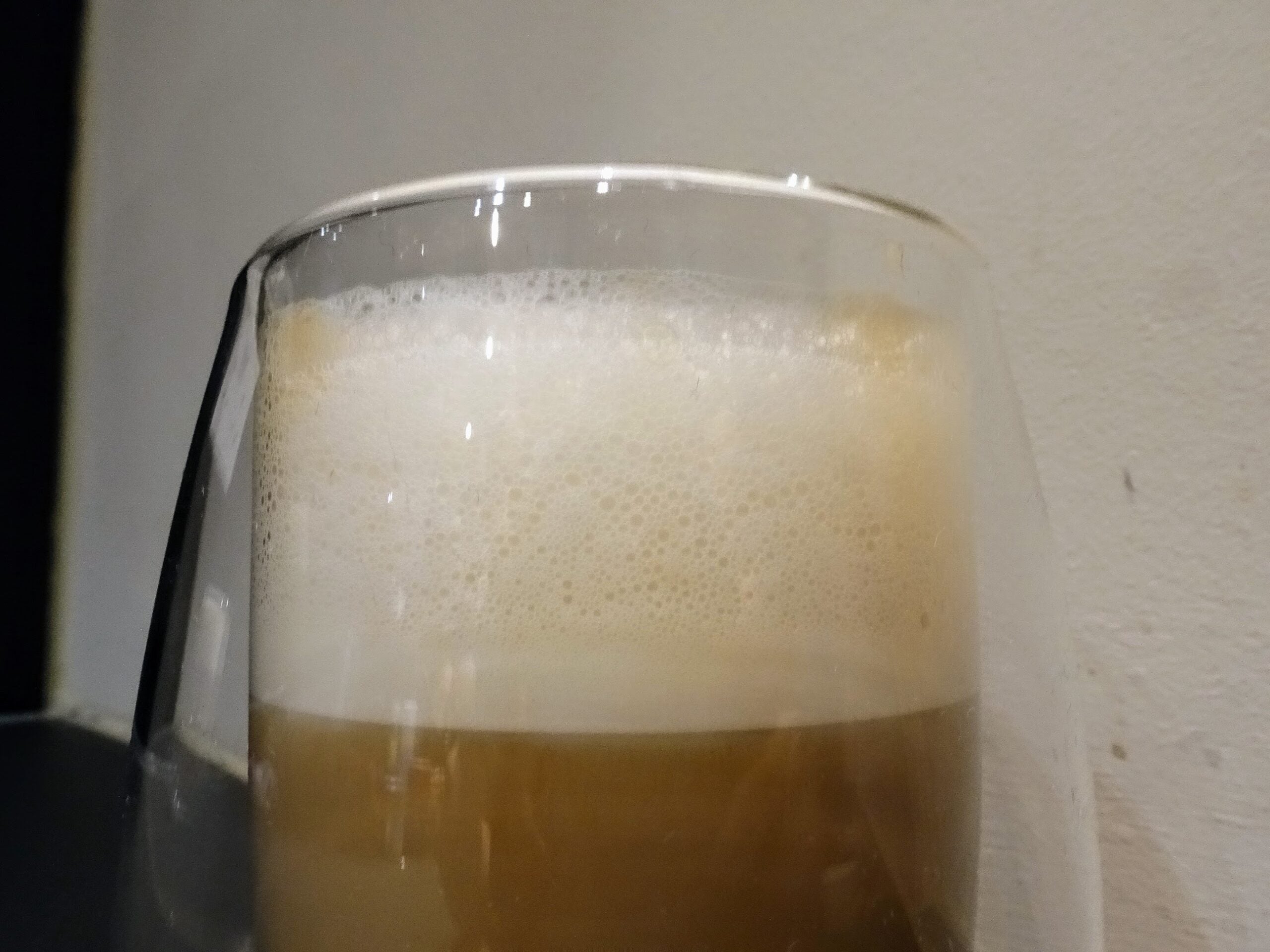 Coconut milk is another tricky one: many average supermarket coconut milks are way too light to form any noteworthy amount of foam. Look for anything with added fat (like higher coconut content) or stabilisers, although it’s best to get a milk specifically meant for coffee as it can also split easily when coming into contact with the acidity of coffee.

You might still be able to squeeze a latte or a flat white out of a lighter coconut milk, as you do tend to get a very thin layer of microfoam on top. But for cappuccinos, only a more professional product will do. 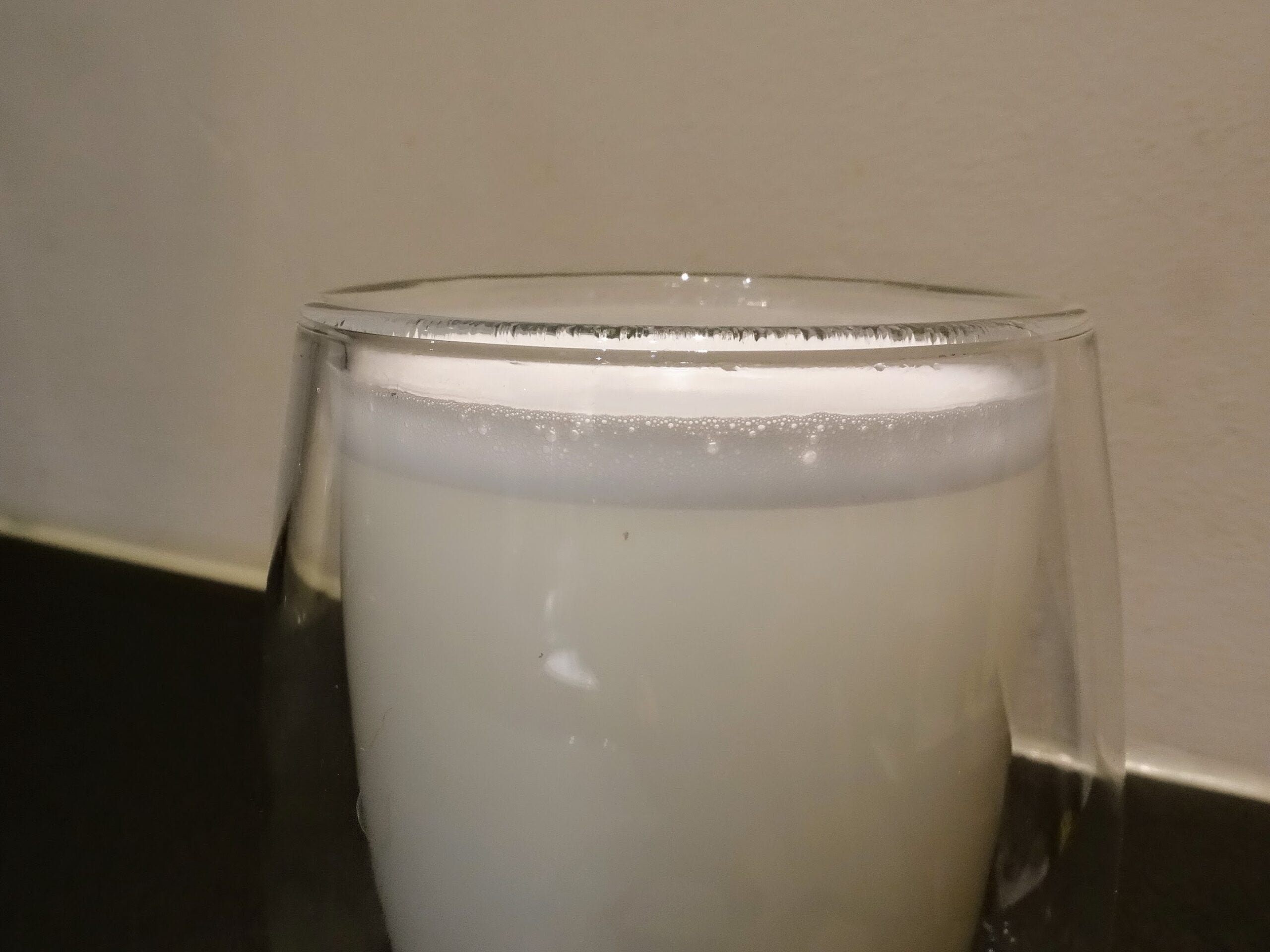 Plain cashew milk tends to fluff up very well, provided the fat content is sufficient. It curdles a little when added to coffee – but nowhere near as much as plain almond milk.

In terms of fluffiness, the froth here is not as abundant as the one you get with pea protein milk. However, it is more impressive than soya milk’s. When it comes to the quality of the foam, cashew milk holds its shape and microfoam almost as well as soya milk and somewhat better than pea protein milk. 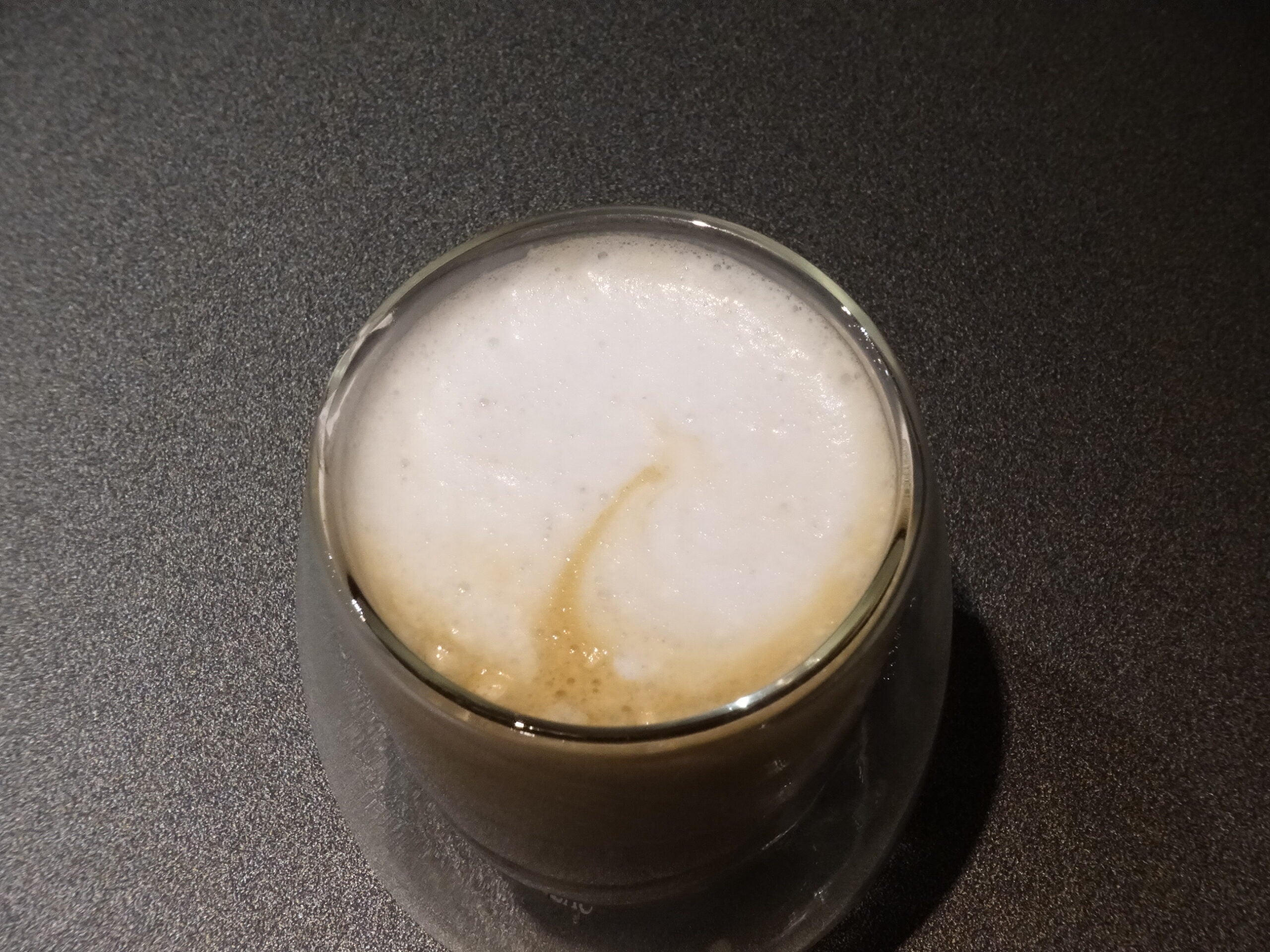 If you’re using a coffee machine’s steam wand and a thermometer, it’s better to err on the side of low when foaming plant-based milks: 55-60°C is a good range to turn off your steamer. Remember that the hot wand and the steam already in the jug is likely to raise the temperature for another couple of degrees after you stop steaming.

However, if you’re using a milk frother, it’s likely you already have a pre-set temperature or a few different options. I regularly opt for the 65°C setting of my jug frother, which works just fine. Automatic milk frothers get you results quickly, but don’t have the pressure to produce a froth as fluffy and stable as steam wands do. 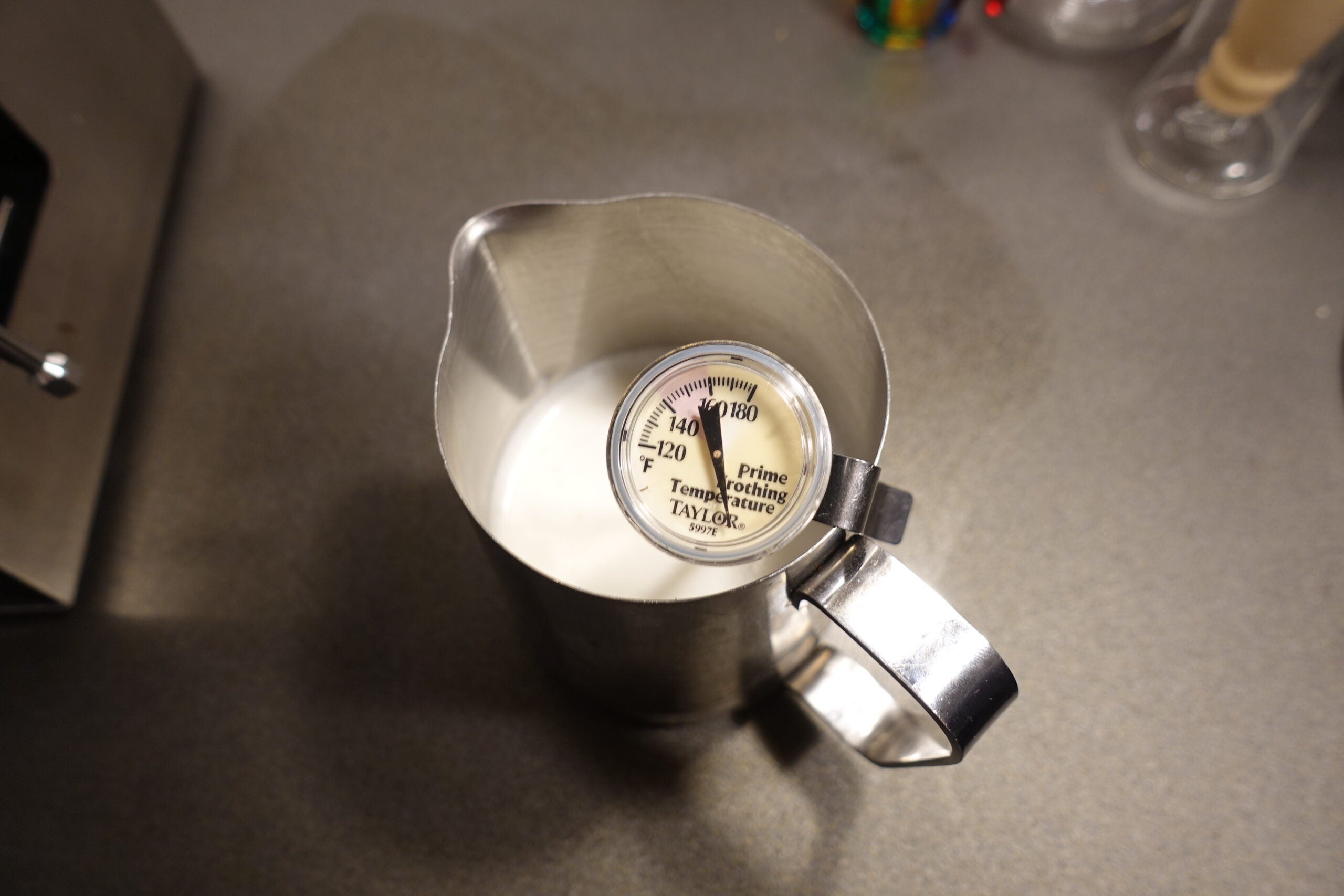 For more on ways to foam milk, read our How to Steam and Froth Milk for Coffee guide.