EE has switched on the latest upgrade to its 4G mobile network with support for Cat 9 smartphones, promising even faster downloads with top speeds of 450Mbps where available. But what is Category 9 LTE-A technology and what does it mean for you?

The first UK mobile provider to roll out 4G services back in 2012, EE has now claimed another apparent milestone by beating its competitors to offering Cat 9 network speeds in select locations.

EE demonstrated its new network capabilities in the video below using an HTC 10 smartphone, but what’s the low-down on Cat 9 and why does it matter? Allow us to explain.

Cat 9 is short for Category 9 and refers to the capability of your mobile to support certain types of networks. The higher the number, the faster the theoretical download and upload speeds to and from your device. Anything from Cat 4 upwards supports the faster LTE Advanced networks (also known as LTE-A, 4G , 4GX, 4.5G or 4G LTE ULTRA) which are now becoming standard around the world.

Cat 9 smartphones and tablets are theoretically capable of reaching download speeds of 450Mbps (or 452.256Mbps if we want to get technical about this) and upload speeds of almost 55Mbps. Although in real-world situations these speeds are somewhat slower, as EE’s demonstration showed.

Where will I be able to use it?

EE has already switched on support for the faster network, but only at Wembley Stadium. It will expand Cat 9 support in the capital in the coming months, starting with the Tech City neighbourhood in east London.

Further locations to be activated in 2016 include Birmingham and Manchester, while the company says that it hopes to have 500 sites support Cat 9 by the end of 2017. It was fairly quick to roll out 4G across the UK back in the day, and we’d expect similarly comprehensive coverage when it comes to Cat 9.

But what about the other UK networks, you ask?

No other UK network has announced plans for Cat 9 support publicly. TrustedReviews has contacted O2, Vodafone and Three for comment on their plans, and we’ll update this piece when we get a response. 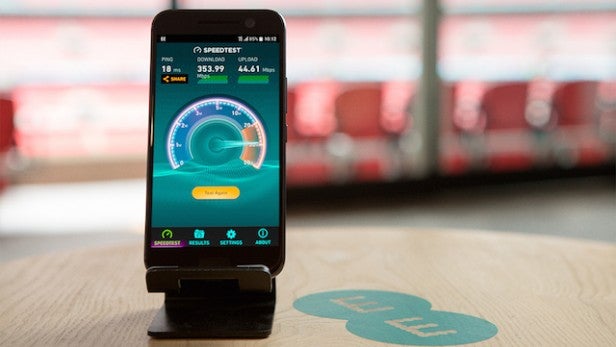 What phones can take advantage of EE’s Cat 9 network?

Not many phones can use Cat 9, which isn’t surprising given how few countries in the world offer support for the standard.

As befits the world’s biggest smartphone manufacturer, Samsung is the company with the most Cat 9 devices on the market, including last year’s Galaxy S6 Edge and Galaxy Note 5 in the UK. Some of the firm’s older Galaxy handsets also come with Cat 9 support, albeit only in South Korea.

Of this year’s devices, Samsung’s flagship Galaxy S7 and Galaxy S7 Edge will both be able to connect to EE’s new network, as will the Galaxy Note 7 – once it stops exploding, of course.

Perhaps more importantly, as Cat 9 is a new-gen mobile networking standard, you can expect all of 2017’s flagship devices to support it, as well as some phones launched in coming months, including Google’s new Pixel smartphones and the iPhone 7.

Watch: What’s the best smartphone in the world right now?

Is the UK leading the world in Cat 9 support?

While it’s certainly not the first country to switch on a Cat 9 network, it is part of the vanguard. For example, countries like South Korea, China and the USA all still await their first Cat 9-supporting network to come online.

Australia was among the first major countries to switch on a Cat 9 network and, as mentioned, mobile operator Telstra has become the first globally to switch on support for Cat 11 devices.

Cat 9 networks are up and running in countries like Japan, Nigeria and Qatar, but it’s in Europe where the standard has received the most support, with Estonia, the Czech Republic, France, Germany, Greece, Latvia, Lithuania, Spain and Sweden all offering Cat 9 support on at least one network today.

Are you planning to get a Cat 9-ready smartphone this year? Let us know in the comments below.