Too much heat is a horrible thing, as it feels like it’s practically impossible to cool down again. Technology is here to help, with fans and air conditioning (AC) being the two main cooling devices available to us.

But what’s the difference, how do they work and which one is best? In this guide we detail the key differences between fans and air conditioners based on our expert knowledge and experience reviewing both types of device.

Let’s start with the easy one: fans. Fans simply have blades, like the propeller for a plane, that spin around and displace air. While blade and fan design have an impact, the simplified rule is that the faster the blades move, the faster the air flows and the greater the cooling effect.

By themselves, a fan can’t cool a room. Technically, they don’t cool you, either. Instead, they work as an evaporation aid with the breeze helping sweat evaporate. As sweat evaporates it has a cooling effect that lowers your body temperature, making you feel more comfortable.

Fans can also be used for air circulation, speeding up the process of pushing hot air out of your home and drawing in colder air from the night. Just be aware that you’re working with the ambient temperatures available to you, so if it’s a balmy hot night, a fan can only draw in the warm outside air and your house isn’t going to cool down that much. You can see a selection of the best fans we’ve reviewed in the attached guide.

All air conditioning works similarly, with portable air conditioning units the most popular in the UK, although there’s a growing number of people with fully-installed home units. At the heart of an AC unit is a refrigeration unit, which contains a refrigerant gas sealed inside a system.

This gas is kept compressed, turning it into a liquid. The gas hits an expansion valve, which allows it to turn back into gas through evaporation. This part of the unit is called the evaporator coil, and it becomes cold through the process.

Hot air from your room is pulled into the AC unit, via a fan, onto the evaporator coil, which pulls heat and moisture from the air. The heat is transferred to the refrigerant gas, which warms up, while water is removed from the system and, usually, vented outside.

The now hot gas is passed through a compressor, which turns the refrigerant back into a hot liquid, which can no longer store so much heat, and passes it through the condenser coil. A fan blows over this coil to remove the heat and vent it to the outside. The liquid gas moves back into the expansion valve and the process starts again.

In a typical portable system, the pipe you hang out of your window contains the removed heat and moisture, while the vents at the front blow chilled air into your room. With properly-installed air conditioning, the condenser coils and compressor are located outside of the house, leaving the vent and evaporator coil inside.

By working in this dual way, by removing heat and moisture and blowing cold air into your room, air conditioning can actually reduce the ambient temperature of a room, making it colder than outside.

Air conditioning units are sold in the UK rated by power in British Thermal Units (BTUs). A BTU is the amount of energy required to heat one pound of water from 60F to 61F. As air conditioning effectively is a heater in reverse (it pumps hot air out of your home), the same measurement is used.

There are other factors to consider, too. For example, put an AC unit into a loft conversion with a south-facing room, and you’ll not only have the power of the sun to contend with, but the heat rising from the rest of the house, too. Particularly with portable units, you may find, then, that you need to buy a more powerful AC unit than you may have expected or that they’re most usable at night when it’s cooler outside. 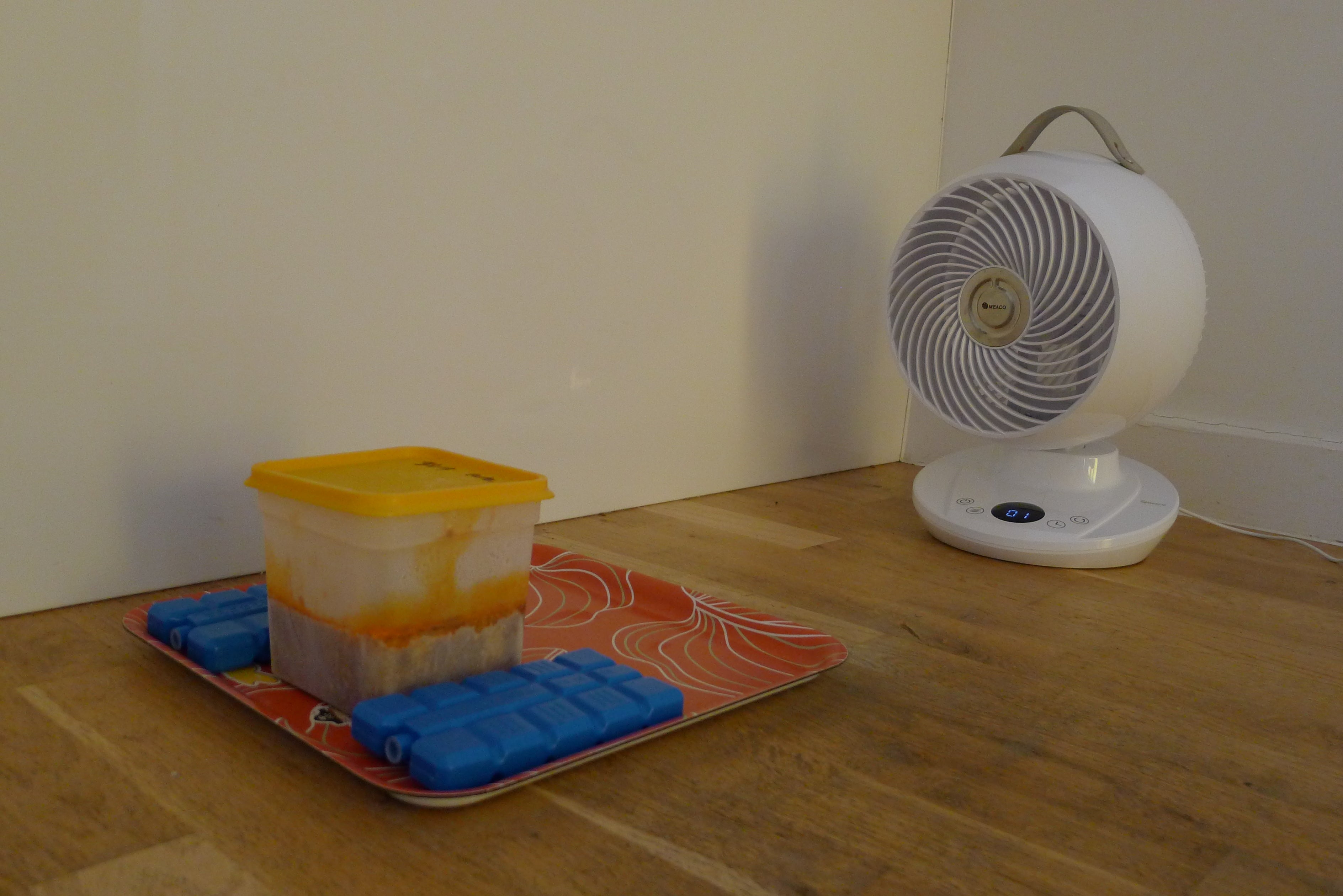 Typically, fans use between 70W and 150W of power, depending on the model and features. Even at today’s energy prices (28p per kilowatt), that’s between 1.96p and 4.2p an hour to run a fan.

AC costs a lot more to run. A typical 10,000BTU unit uses 2.93kW of power, similar to a kettle. That costs 82p per hour. In other words, you could run the most powerful fan in our example for 19 hours for the same cost.

Running the AC carefully and aiming for a higher target temperature (assuming your unit has a thermostat on it) can help reduce costs. You can also use smart technology, such as the Tado Smart AC Control V3+, to manage how and when your AC runs.

What about evaporative coolers?

There’s a third type of cooler that we’ve not talked about: evaporative coolers, such as the Evapolar evaChill EV-500. These use a tank of water. Water from this tank is pulled up in front of the fan (either via wicking or a more physical method, such as a pump). As the fan blows through the water, it’s evaporated, which causes the air temperature to drop slightly. It’s the same process as sweat evaporating from your skin.

Evaporative coolers use similar energy to a fan, and the only thing you have to add is water: most tanks are big enough to last through the night. Unlike a fan, the air that they blow is colder than the ambient temperature, so they do actually cool.

Don’t get too carried away though. How good an evaporative cooler is depends on the temperature and relative humidity. These coolers work best when it’s hot and dry. And, as they add moisture to the air, they become less effective the more you run them in a sealed room, by increasing humidity, which will make you feel uncomfortable.

In our tests, we’ve seen that good evaporative coolers will reduce the air blown at you by between 2C and 6C: enough to make you feel cooler, but not enough actually to reduce the temperature of the room.

AC units are really loud, especially the portable ones. The compressor will make a constant noise that can be hard to sleep with. This is less of an issue with fully installed units, which have the compressor outside; however, you may still be able to hear these depending on where they’re placed.

Fans are much quieter, particularly on quieter settings. The closer you sit to a fan, the slower you can run them, as you’ll still get the effect of the cooling breeze. At night, using a fan’s nighttime mode and putting it close to you usually means that you can sleep without getting disturbed.

Look out for fans with the Quiet Mark logo on them: these have been scientifically tested for the quality of sound they put out, and only the least annoying models get the logo.

Which one’s better: a fan or air conditioning?

If you actually want to reduce the air temperature in a room, then air conditioning is the only way to do this. AC units will create a nicer environment for you, and one that’s more comfortable. They’re expensive to buy, expensive to run and can be noisy.

A fan is much cheaper to buy and run, and quieter. Fans can’t reduce air temperature, but buy one of our best fans and you’ll find a model that can help circulate air and help cool you down and sleep comfortably through the night.