Digital board games provide an excellent outlet for playing with friends if you can’t see them in person or convince them to take up Fortnite.

A lot of people will already have a basic understanding of simple board game rules, from hours of being forced to play monopoly with siblings on rainy holidays. As such, it might be a smidge easier to convince them to play something like Risk – especially as most digital board games are either free or relatively cheap.

We’ve compiled the best digital games that you can play right now, from games that are completely gratis to paid-for classics that have big, competitive communities.

A quick disclaimer: a lot of these titles have in-game purchases, where you can expand the board. These really aren’t necessary if you’re just looking to shoot a few dice and chat with pals, so ignore these unless you’re a die-hard fan of the game. 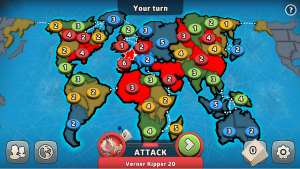 Although we categorised this as the best free option out there, Risk could easily have topped this list regardless thanks to its engaging interface and quick-to-learn gameplay.

For anyone unfamiliar with the game, you play a leader who’s trying to take over the world. You control several armies who attempt to wrestle control of territories from other players, with results of those mini battles dictated by dice-throws.

The rules are so straightforward that you can learn them in about 15 minutes and quickly move on to deploy your battle tactics. And it’s easy to find friends online, although you do have to set up a RISK profile to be able to do this. You can also team up with players, forming a pact to take down other leaders.

The only drawback here is that there’s no easy way to talk with your pals casually, so you’ll have to set up a corresponding chat-group if you want the game to feel more like a social affair. 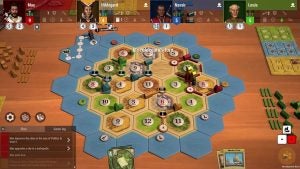 This is a solid favourite with board game nerds, but anyone who’s board-averse will probably not thank you for starting them off with this fan favourite. The tutorial is also relatively brief, so you might need to give newbies a few pointers before you plunge in together.

You play as a new arrival to a resource-rich island, who needs to build cities and roads while gathering materials and trading with players. Once you get into the nitty-gritty of the rules, Catan becomes a rewarding strategy experience.

One of the nice little extras in this digital version is it comes with a handy chat box, so you can trash talk your friends as you play. And finding them online is relatively easy, but again you’ll all need to set up a profile to do this.

Recent Steam reviews have indicated that there have been some server issues with the digital game as more people log on, but these problems didn’t occur while we were settling on our new islands.

That said, while the “Free Match” mode is usually available to non-paying players, this has temporarily been disabled by the team until they smooth out the problems. You’re given a few credits when you start the game which you can use to get around this, or you can stick with the free-to-play custom match mode with friends. It’s a little confusing, but it is still possible to play for free. 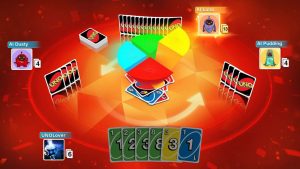 Buying the digital version of UNO will set you back £7.99, but it’s a game with a lot of mileage.

It’s got to be one of the simplest games to learn and is well-suited to families who want to involve younger players. You each have a hand of cards, which you discard into a central pile by matching the previous card’s colour or number.

You can use a headset with the digital version to chat with your pals, which is nice. But there is some nuance lost in the game in this digital version – for example, calling people’s bluff is much harder when you can’t read their facial expressions. And the AI version of the game provided the least challenging round of cards we’ve ever played.

But if you need an accessible game that appeals to multiple generations, this is a sure winner. 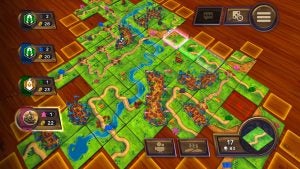 Carcassonne ticks all the boxes when it comes to satisfying online play. You can add friends, chat with them in a dedicated text box, and set a limit on how long the game is allowed to last. It also provides a good balance of easy-to-learn rules and satisfying gameplay.

The game starts with a stack of randomised tiles, with a mix of cathedrals, roads, cities and fields spread across them. It’s your job to lay these down in a way that makes geographical sense, and you’re rewarded for building and establishing new structures.

As a heads-up, the tutorial on this is much more focused on how to use the interface rather than explaining the rules, so if you’re entirely new to Carcassonne, you might want to check out a YouTube tutorial.

The digital version of this game has a few advantages over the old-school physical version. It handily counts up the points at the end of the game (so there are no big squabbles), and it also has a very pleasing animation to confirm when you’ve successfully built a city. 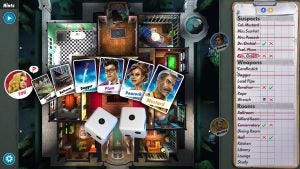 Clue to Americans and Cluedo to the Brits, this is a sweet little puzzle game about solving a murder.

The digital version is a slight update on the classic, with snappily dressed characters and a modernised mansion. But it still follows the basic gameplay of moving from room-to-room and accusing different characters of various deeds.

This is probably aimed at a slightly younger crowd, with very basic rules and a rather generous helping hand from the computer (rather than having to deduce which characters and items are ruled out, the computer notes it down for you.)

But it’s a classic game that most people will be familiar with and it has such an easy-to-navigate interface that you could convince game-averse types to give it a whirl.

Again, there’s no built-in conversation option here, but you can fire-up a conversation in a separate chat group. 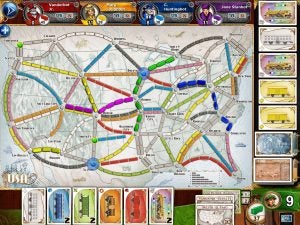 Alright, so some people really don’t like board games. Maybe they had a traumatic experience with Scrabble when they were younger. Perhaps they’re just impatient. But if you’re trying to convince a pal to give the boards another shot, this is your best bet.

It takes about three seconds to learn the rules: connect cities with trains, the trains must match the colours on the board, you can pick two new trains each round. Easy, right? But a lot of strategy comes into play when you get into the thick of the game.

The game has a hardcore fan base, so if you plunge into general multi-play, you may have your butt handed to you a few times. But if you get studying before your friends join, you’ll have the pleasure of thrashing them the first time they enter the station.