In the world of smart lights, Philips Hue is still the undisputed top dog. Despite an ever-growing number of other lighting brands encroaching on its territory, Hue has continued to expand and evolve to stay ahead. And now that its entire range supports Bluetooth, it’s never been cheaper or easier to jump aboard the Hue bandwagon.

But there’s so much more to explore beyond Hue’s own products and apps; this is a pretty open ecosystem, and there are plenty of third-party apps and integrations that do interesting stuff with Hue’s lighting and accessories. Here are the best Philips Hue apps to make your lights more fun and dynamic.

A huge library of dynamic scenes, including a mode that syncs your lights to your music 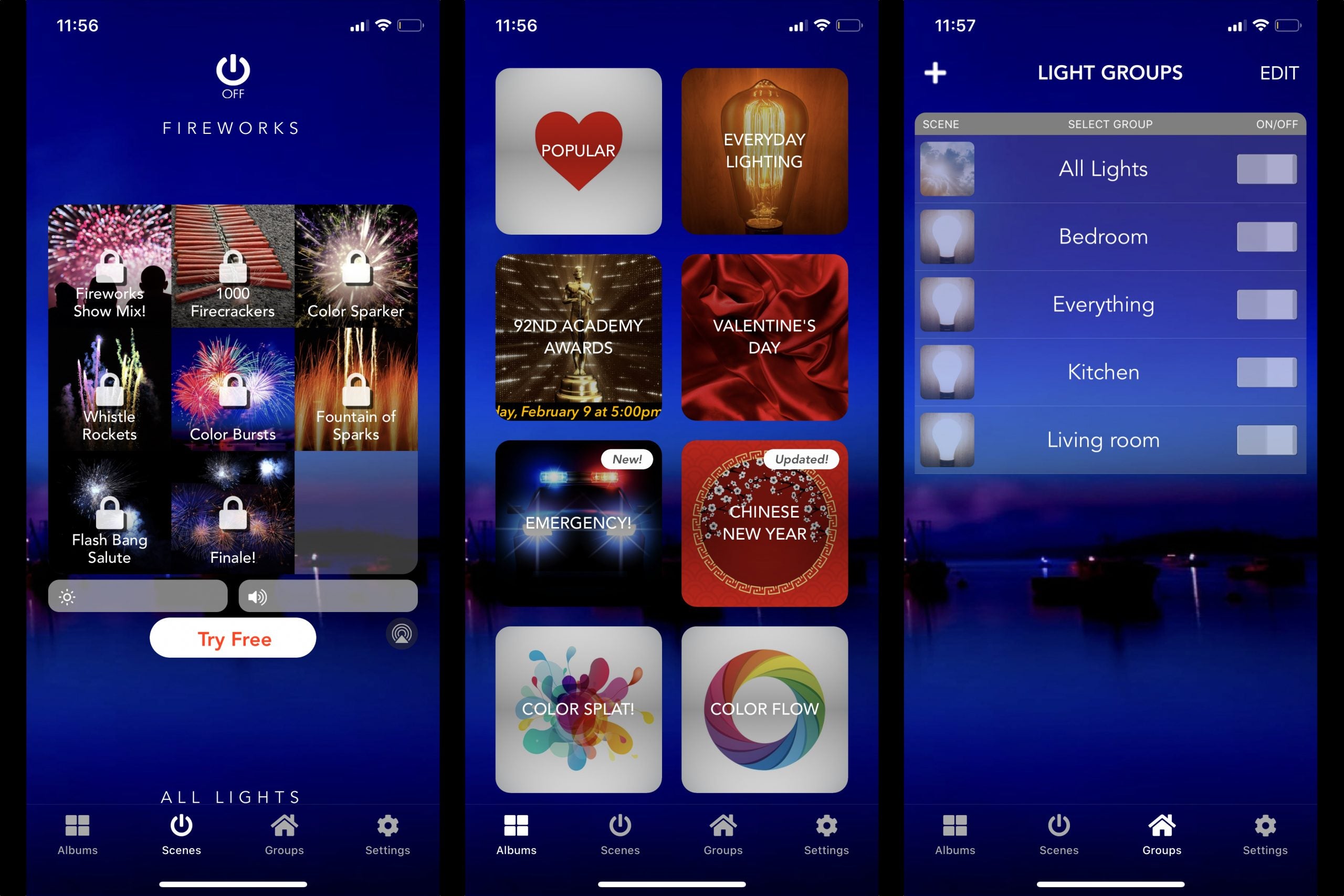 OnSwitch works with both Hue and Lifx bulbs, so if you’re someone with both those brands, then this could be one of the best Philips Hue apps for you. All the basic controls are at your fingertips, but it’s the library of scenes that make this app stand out. From candlelight scenes to jellyfish (hey, you do you; we’re not judging) there are heaps to choose from. The app is constantly updated with new themes to stay relevant, with the Super Bowl and Chinese New Year, both recent additions.

Some are unlikely to get much use – we’re not sure how many people want to have their lights and speakers imitate a German police car, but it’s an option. The app is pretty easy to use overall, although it sports a slightly messy interface.

There are some scenes available for free, but you’ll need to cough up a monthly fee of £3.99 for the premium tier to unlock the whole catalogue. Alternatively, you can buy the premium scenes à la carte, but just keep an eye on how much you’re spending. There’s a 7-day free trial if you want a taste of the ongoing paid tier. 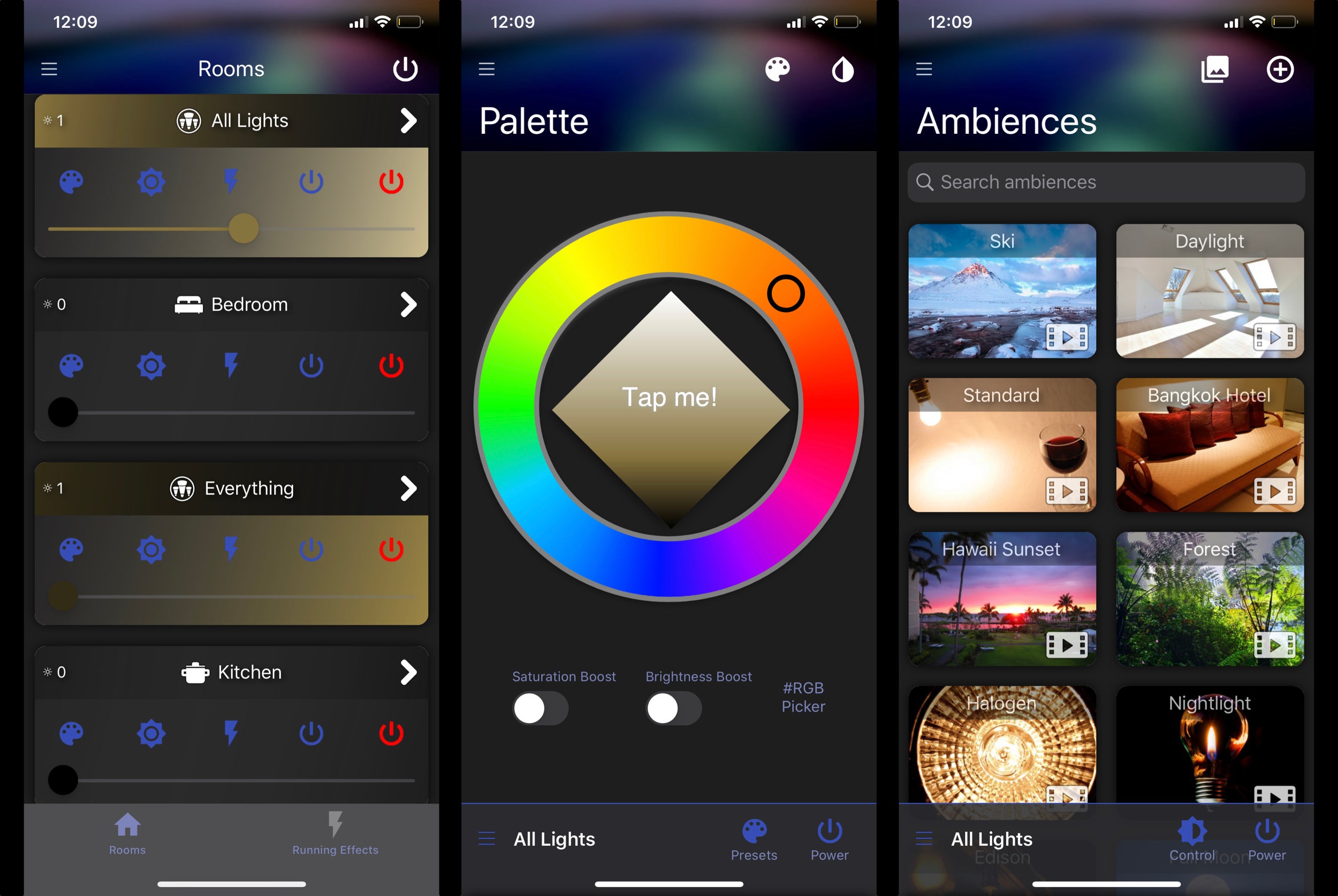 One of our absolute favourite Hue apps right now is hueDynamic, which is jam-packed with features for your setup. There are “experiences” that combine lights with sound and can be mixed and matched. “Ambiences” create scenes based on photos (and are stored on the bridge, so you don’t have to keep replicating them). There’s a Disco mode and even a feature that lets you point your phone at the TV to create scene-fitting dynamic lighting.

You can include the same lights in multiple groups and control lights on multiple bridges at once – super-handy!

It’s a pretty substantial package, and much is available for free – although you’ll need to upgrade to the paid Pro version to remove time limits on certain experiences and unlock features such as advanced Hue Dap and Dimmer programming. 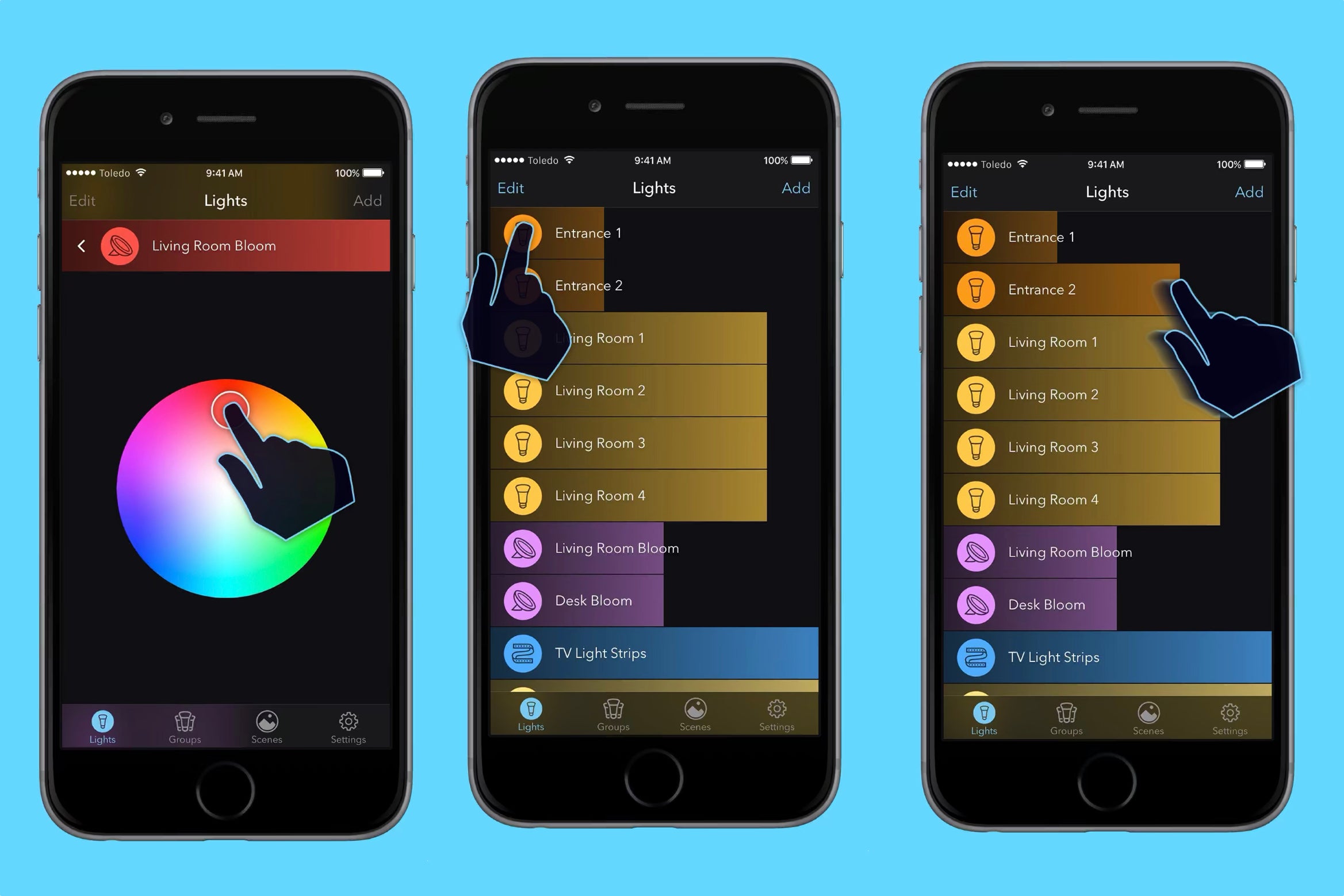 Huemote is one of the simplest and most straightforward Hue apps around, providing a quick and easy dashboard of all your Hue smart lights. It makes changing bulb colours or adjusting brightness super-easy, and you can even control groups and scenes from the lock-screen using the Today widget.

You can build groups and control up to 16 lights at any time, with the ability to organise bulbs and groups as you wish.

If you have a lot of Hue lights and rooms in your home, the Huemote app offers a great way to view the status of all your lights on one screen. Highly recommended for anyone who wants to simplify their Hue experience as much as possible. There’s even an Apple Watch app. 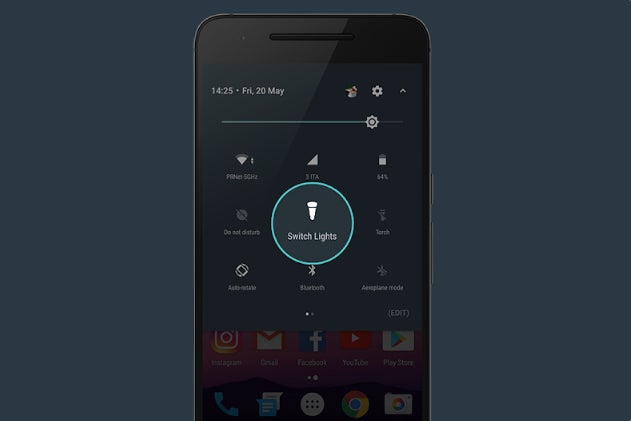 Exclusive to Android, QuickHue adds a Hue icon to your Android’s Quick Settings, allowing you to turn your lights on and off with a tap. It’s that simple.

The basic version is free and provides a single tile, while the $1.99/£1.99 Pro version gives you up to six. Try the free version and see how you get on, but for Android users, this app comes thoroughly recommended as one of the Best Philips Hue apps. A real time-saver. 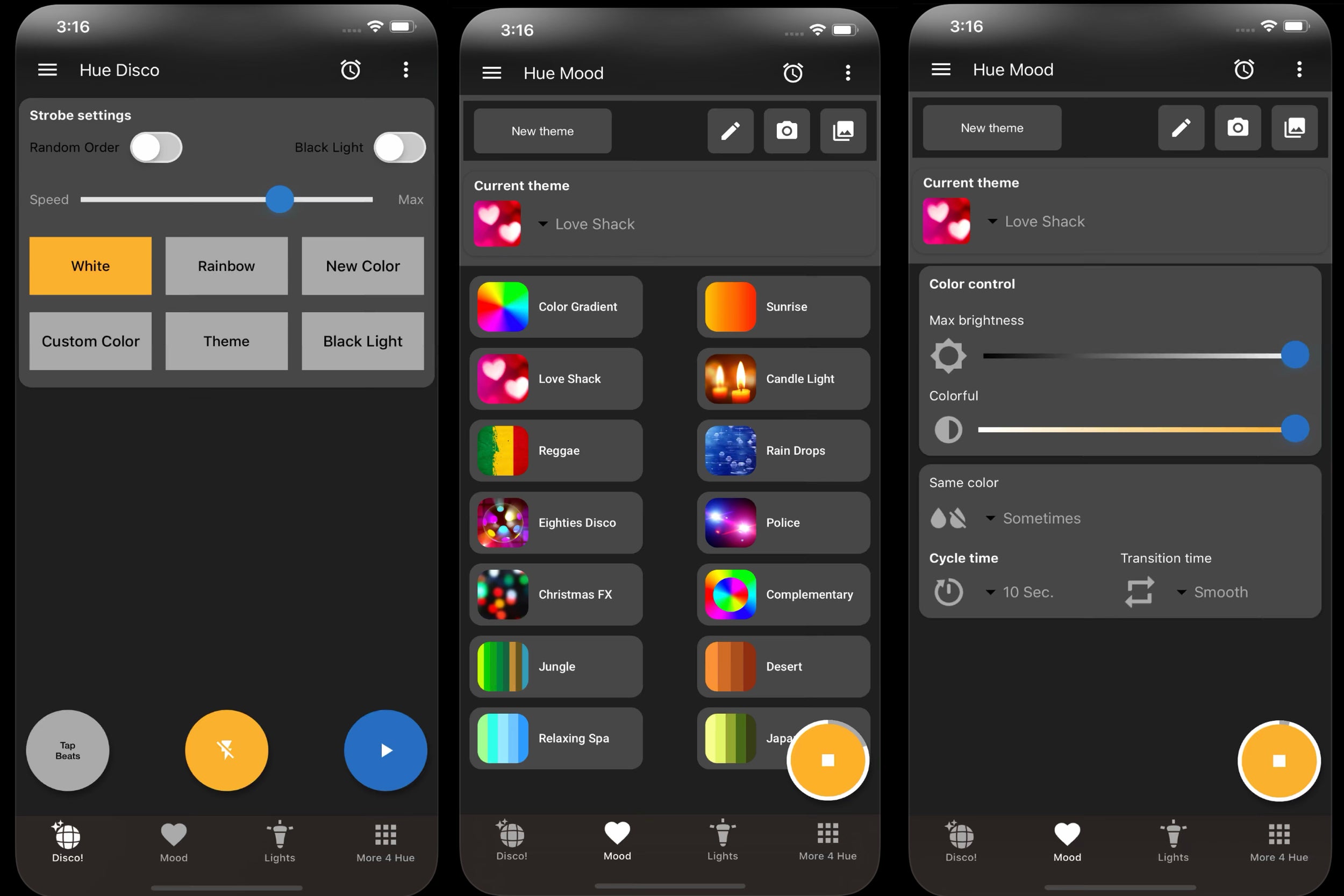 One for the party-lovers. The Hue Disco app uses your phone’s microphone to transform sounds into a light show. It isn’t totally random, either: you can select a themed colour-set for the app to work from, and tweak settings such as transition times, how bright you want the lights, and how often you want to see different colours. There’s a strobe setting, too, which also lets you build a custom colour theme.

We also like how you can adjust the microphone sensitivity and silence detection to control how the lights respond to sound.

There’s enough here for a good time – but it will cost you. The app costs £3.99 to download, making it one of the more expensive options on this list; but it means you get the full suite of features right away.

An incredibly powerful way to control your lights, but it’s for iOS only

If we’re just counting features, the iOS-only iConnectHue might be the most accomplished on the list. It has a £5.99 up-front cost, but for the money, you’re getting an app that’s crammed with new ways to use your Hue lights. Better yet, it’s extremely well polished and regularly updated.

Creating animations is super-easy, and there’s an impressive level of depth to the customisation. Features include intelligent timers, and something called “Magic Scenes” – an easy, fun tool for building custom gradients and deploying them across rooms.

The switch and motion sensor editor is really great, too, making it easy to assign various scenes to different buttons and triggers.

It also now offers Siri Shortcut support, letting you execute scenes without opening the app at all. Overall, our favourite app on this list – just a shame it isn’t available on Android.